The Camelback locomotive design, used in conjunction with the exceptionally wide Wooten firebox, not safe though 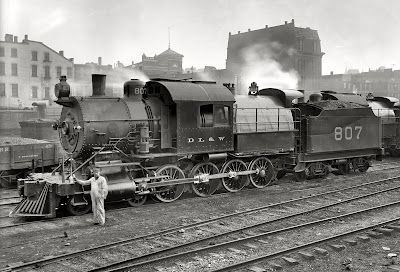 The "Camelback" design, which straddled the cab over the center of the boiler, allowed the exceptional width of the Wooten firebox, which burned lower BTU anthracite coal from Eastern Pennsylvania.

The Locomotives in the picture were also called "Mother Hubbards" among other names. They were discontinued from freight service because if a side rod broke, it would wipe out the cab and if on the engineer's side, the engineer also. In yard service they were much safer because of the lower speed which was not so likely to break a rod and sling it through the cab.
photo from http://www.shorpy.com/node/9335?size=_original
at Friday, December 31, 2010