the largest smash up in classic car racing I've ever seen, Road America 2005

The fifth place guy was racing well before the green flag and tried to force his way between the wall and the car in front of him. He started scraping the wall and the guy behind him checked up and the car that hit him started to spin and then it was one after another into them. I am amazed that no one was killed. All the drivers except two had hans devices.

The green flag was in deed thrown. I red flagged the race with in 3 seconds of the green. Even with the red flag the drivers in the back just keep driving into the rear

Even with the red flag the drivers in the back just keep driving into the rear. The red was shown at corner 15(the walk over bridge). The drivers just did not pay attention. All drivers were forced to attend a meeting right after the incident. They were all yelled at.

many fist fights started after drivers started getting out of there cars.

Apparently the prior lap was not green-flagged due to the cars not being in position so this was a second attempt to start the race. Whether or not all of this contributed to the accident remains to be seen.

(statement by the operating steward for this race, http://www.freshalloy.com/archive/index.php/t-115446.html )' 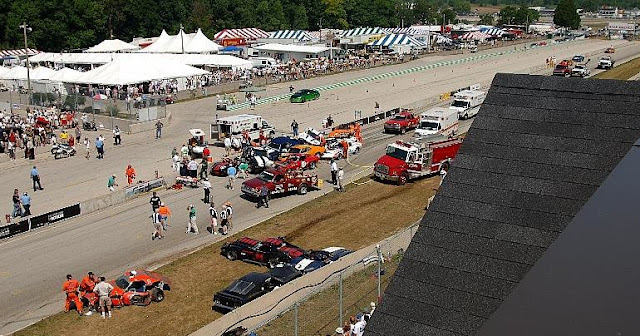 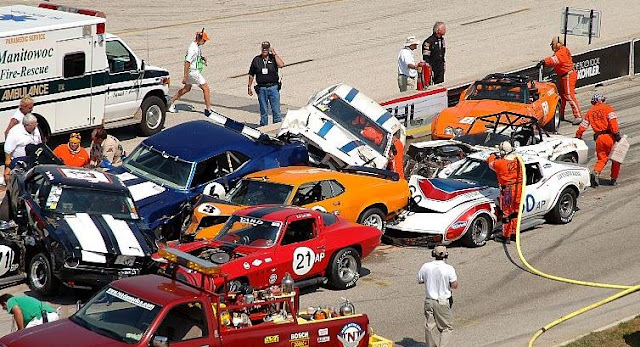 I was in the second row...we came up the hill as always and as the front row accelerated the starter did NOT throw the flag, the front row let off the gas and I hit my brakes as did the Jag next to me also the third row and fourth row...someone maybe 5 rows back hit the car in front of him and that caused all of this. You are looking at a few million dollars in wrecked cars.

as it turns out the (novice) race director told ONLY the front row he wanted a 50 mph start.....these cars do not do 50 mph