Will Eisner the originator of the graphic novel, namesake of the Eisner Award, the comic book and cartoon industry equivalent of the Oscar, drew comics for, and about, the U.S. military to assist the maintenance mechanics in learning the dull info 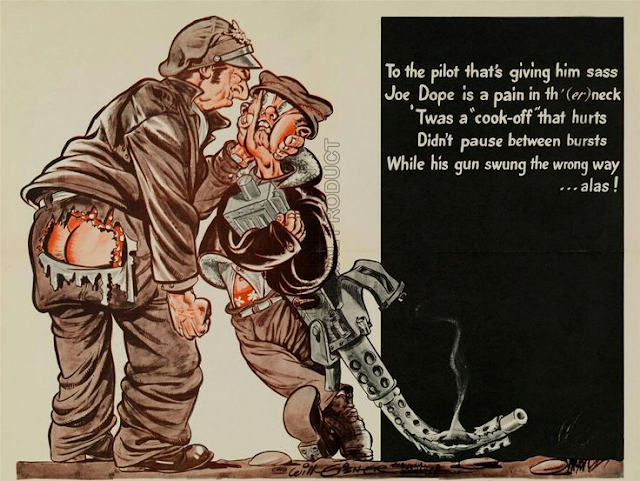 At one point, Eisner traveled to Korea to get a firsthand knowledge of GI requirements.

During the trip, he wrote, “A big guy with a dead cigar in his mouth came up to me, poked his finger in my chest and asked, ‘Are you Will Eisner?’ I said I was, and he said, ‘You saved my ass.’

His tank had broken down in a combat situation, and he used material from one of my stories for a field fix, and it worked and he was able to drive to safety.” 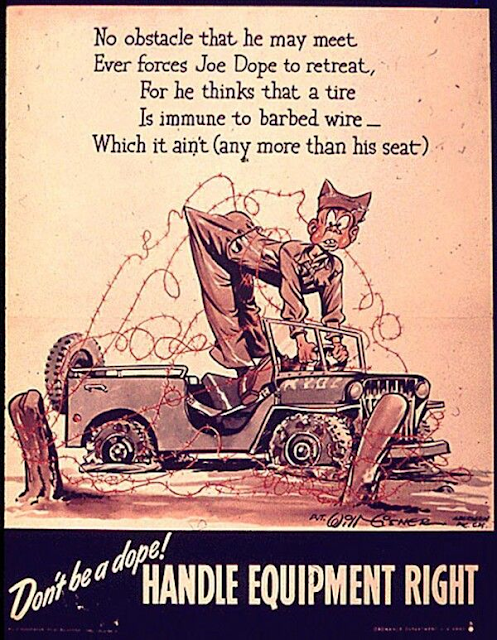 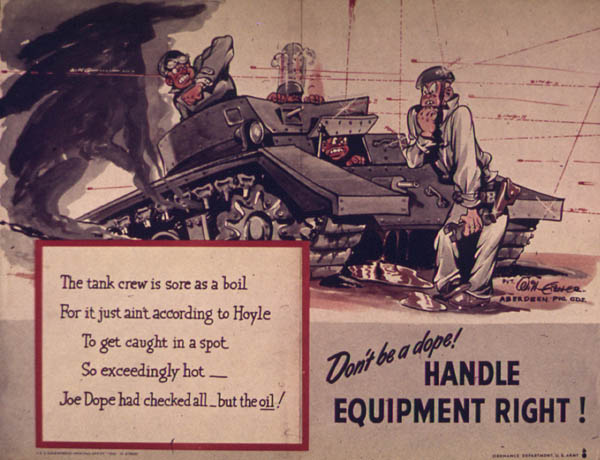 Eisner’s high school friend Bob Kane — future creator of Batman — told him he should consider going into comics. Leaping into the new field in 1936, he quickly made a name for himself. He cofounded the Eisner and Iger Studio, where he created Sheena, Queen of the Jungle.

Eisner is most famous for The Spirit — a genre-bending series about a masked crime fighter. His assistant was Jules Feiffer who later won the Pulitzer Prize in 1986 as America's leading editorial cartoonist, winning the Academy Award for Best Animated Short Film in 1961, he wrote the screenplay for Popeye, starring Robin Williams and directed by Robert Altman, was nominated for Broadway's 1976 Tony Award and in 2004 he was inducted into the Comic Book Hall of Fame.

Feiffer taught at the Yale School of Drama and has been a Senior Fellow at the Columbia University National Arts Journalism Program.

They collaborated well on The Spirit, sharing ideas, arguing points, and making changes when they agreed. In 1947, Feiffer also attended the Pratt Institute for a year to improve his art style http://justacarguy.blogspot.com/2018/03/coffee-and-donuts-video-of-day-steam.html

Among Eisner’s other hires was the 17-year-old Jacob Kurtzberg, who became Jack Curtis and later, when he left the company, Jack Kirby. Under that moniker, he helped create a series of superheroes, including Captain America, the Incredible Hulk, and the X-Men.

Many early comics artists were Jewish. They were enthusiastic about fighting Nazi Germany. Besides Eisner, several prominent comics creators, including Stan Lee, Jack Kirby and Joe Simon served in the U.S. military during the war.

Less well known is Eisner’s stint in the U.S. Army and his work for, and on, the military where he was drafted in as a private, but left a CWO. War and military service were strong threads running through Eisner’s long and productive life.

Most observers also give Eisner credit for coining the term “graphic novel” — and then elevating graphic novels to the level of a serious art form. 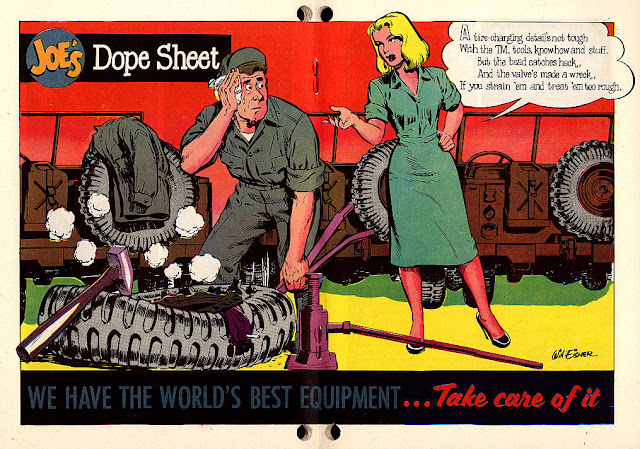 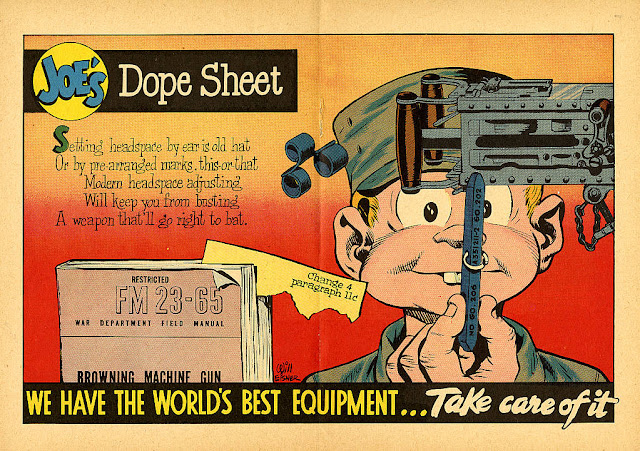 Each issue of PS Magazine consisted of a color comic book style cover, often designed and drawn by Eisner; eight full pages of four color comic continuity story in the middle; and the rest was filled with technical, safety, and policy information printed in two color to save money.

The story starred his earlier character and was called "Joe's Dope Sheet." Each episode offers the same cautionary tale: a soldier who ignores preventive maintenance learns of its importance in the end. Eisner commanded a high level of freedom to create the continuity section.

Will often used sexual references and humor to get the point across, and created other characters over time, including buxom Corporal Connie Rodd, and Master Sergeant Half-Mast McCanick.

Many soldiers at the time barely had a high school education; some couldn't read at a fifth-grade level, said 1st Sgt. Richard Bernard, a panel member.

"So what's the best way for you to reach somebody who can't read the technical manual itself or understand some of the words, but to make a comic strip that grabs their attention?" Bernard said. 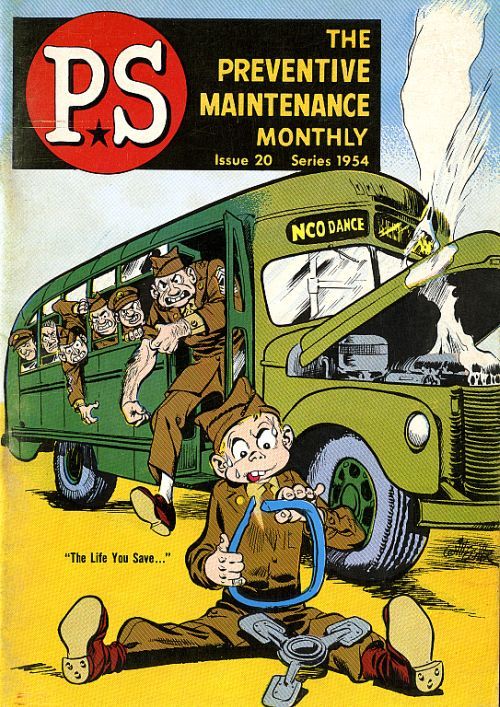 From 1951-1971, Will Eisner produced 227 issues of PS Magazine for the US army, a comic book to make the daily grind of the soldier in Korea (and stateside) a little bit less of a chore and imbue the Army's endless amount of preventive maintenance bulletins with some lightheartedness and eye catching visuals

The magazine was established by the Department of Defense in 1951 to help American troops in Korea deal with aging equipment from World War II and new weapons that hadn’t been adequately tested.

Eisner and his staff took engineers’ descriptions of how to do something and translated them into ordinary soldier lingo. And the illustrations always depicted the action from the mechanic’s point-of-view, not the manufacturer’s. Hence, the revolution.

For twenty years Eisner refined and retooled his product to reflect the times that soldiers were experiencing. Each year he was forced to re-pitch his vision of educational sequential art to satisfy the US army’s requirement to have open bids. According to his wife, “After tests were conducted that overwhelmingly showed that soldiers best understood technical material when it was presented using Will’s graphic approach, opposition grudgingly disappeared.” 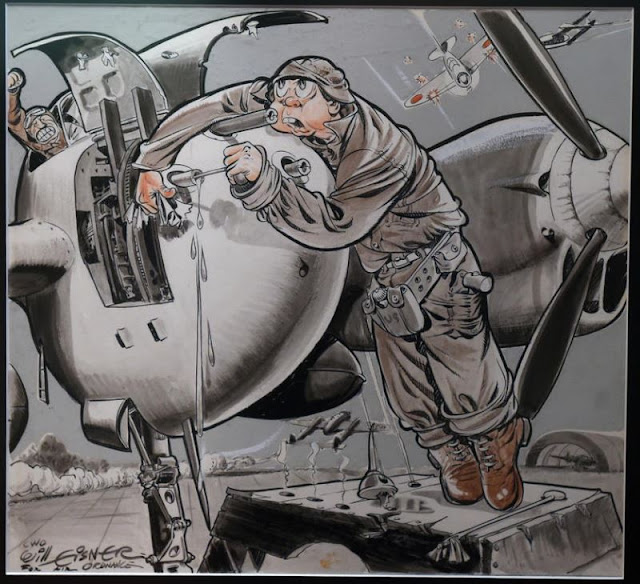 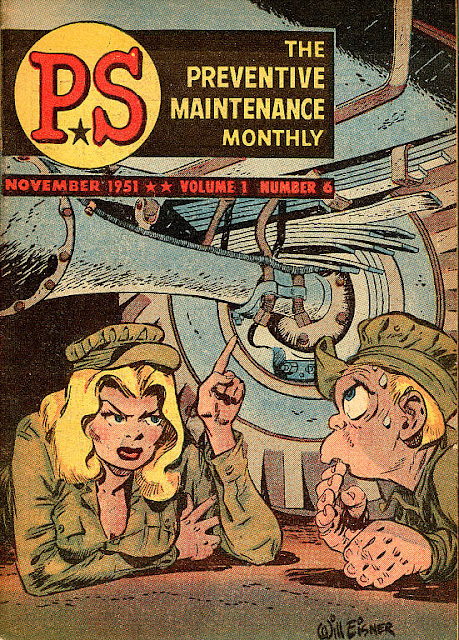 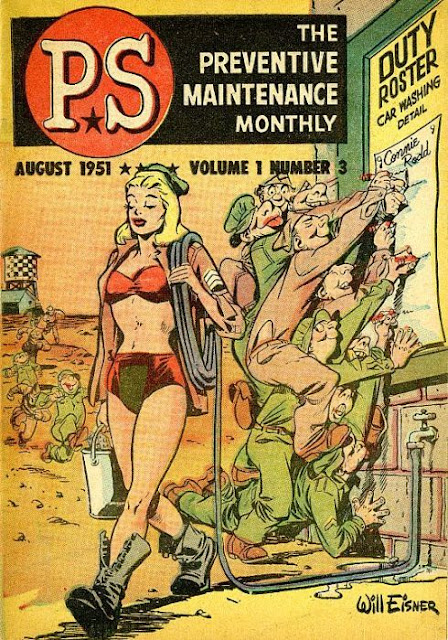 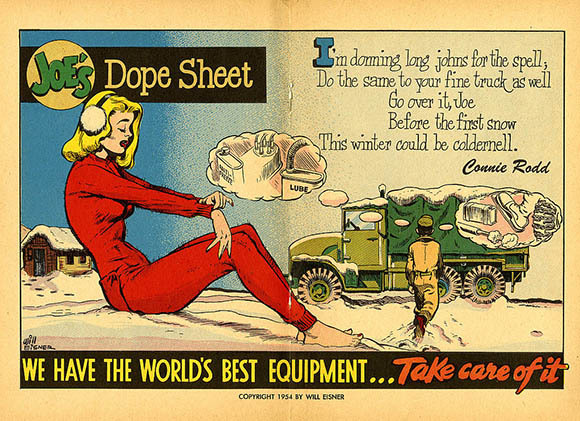 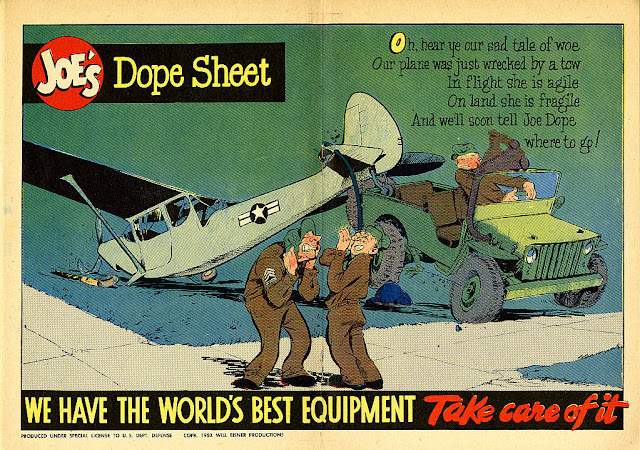 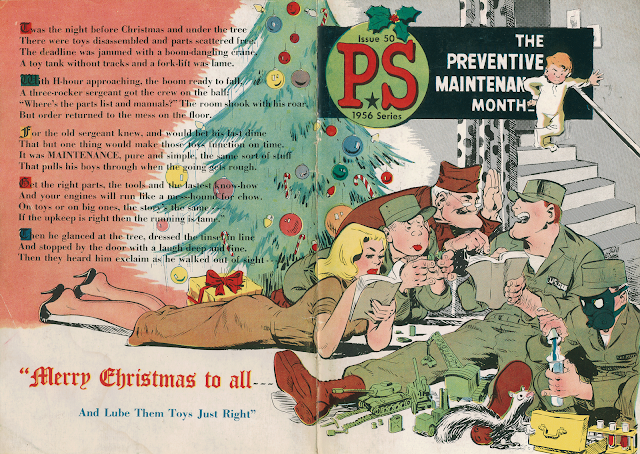 you can enjoy a dedicated blog to the PS Magazine http://thebestofpsmagazine1951-2011.blogspot.com/


In his classic history The Great Comic Book Heroes, Feiffer acknowledged that his former boss was unique. His line “had weight. Clothing sat on his characters heavily; when they bent an arm, deep folds sprang into action everywhere. When one Eisner character slugged another, a real fist hit real flesh. Violence was no externalized plot exercise, it was the gut of his style. Massive and indigestible, it curdled, lava-like, from the page. Alone among comic book men, Eisner was a cartoonist other cartoonists swiped from.”

Will Eisner even did some offshoot work for the Fish and Game departments of Idaho, Maine, Pennsylvania 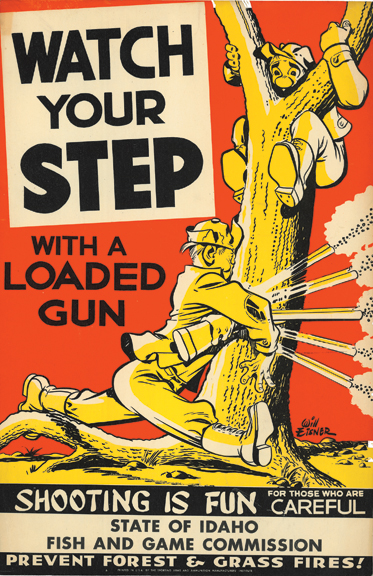 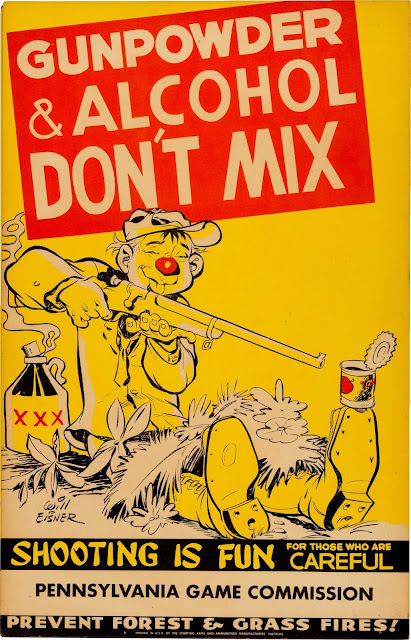 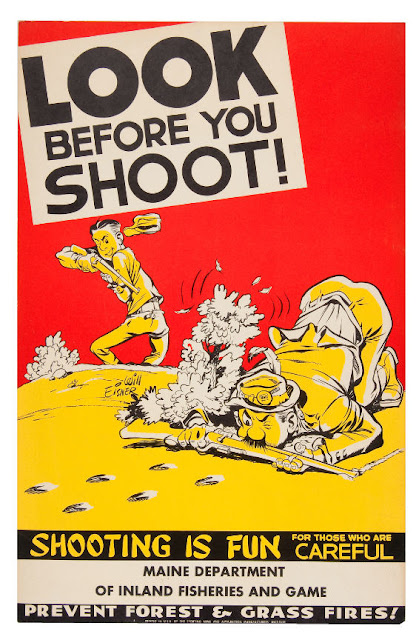 In 1993, when the PS Magazine organisation was being moved from Lexington- Blue Grass Army Depot in Kentucky to Redstone Arsenal in Alabama, the original PS art produced variously by Will Eisner, Mike Ploog, Chuck Kramer, Murphy Anderson and Zeke Zekely was packaged and sent for safe-keeping to Carlisle Barracks in Pennsylvania.

Not long after that, it was discovered that the entire PS art trove at Carlisle Barracks had been deliberately burned in a furnace used for document destruction.

But, it turns out that as the material was being sent for destruction, one of the boxes "fell from a forklift" and a few pieces were grabbed and hidden away... or, more likely, someone realized incredible art, valuable both historically and financially was never going to be missed by the furnace, but could possibly make life a lot easier

You can download issues in PDF (free!) at http://psmag.radionerds.com/index.php/Index_by_cover and or https://digital.library.vcu.edu/digital/collection/psm 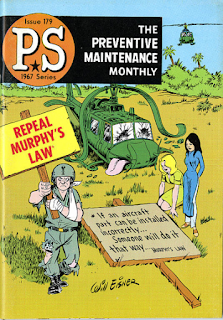 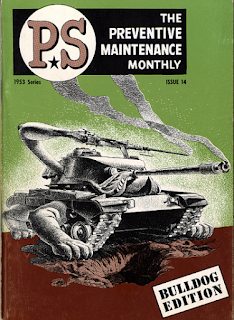