the Mobilgas Economy Run, some info and photos 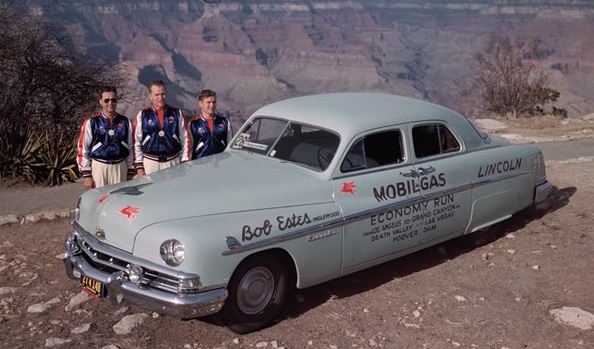 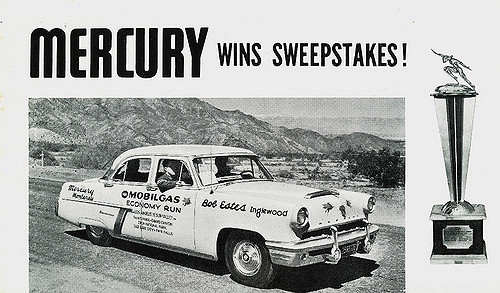 The Gilmore - Mobilgas Economy Run was once our nation’s preeminent car efficiency shootout, where drivers were challenged to extract maximum mpgs on predetermined routes. The Gilmore Oil Company initially backed economy drives from 1929 to 1931, but the big show officially started in 1936 and terminated with its 1968 finale, and was held every year save for 1942 through 1949.
The run always started in Southern California, and the earliest destination was Yosemite National Park (1936-40).
http://justacarguy.blogspot.com/2021/04/im-sure-you-know-of-mobil-economy-run.html
As the decades progressed, organizers moved the finishing line farther away, with final stops including the Grand Canyon; http://justacarguy.blogspot.com/2021/04/ive-never-heard-of-gilmore-grand-canyon.html   Sun Valley, Idaho; Colorado Springs, Colorado; Galveston, Texas; Indianapolis, and even New York City. Refueling was strictly monitored. Participating cars had to be of the domestic breed and representative of what one could buy off the showroom floor — no mileage-enhancing modifications were allowed and specific break-in rules were enforced. Drivers knew their inputs would be the single biggest factor in achieving high mpgs. For the most part, auto manufacturers were more than happy to support the cause, trumpeting the event’s results in marketing and advertising.

the Run was seen by many as a continuous cocktail party for the press and hangers-on. One year the closing featured a celebration of Navaho tribesman, and the next year a Hopi war dance. Ending at resorts that included the Lodge at the Grand Canyon and the Sun Valley Resort, one could only wish to be the lucky newspaper reporter that was on the bus or express train following the race route. 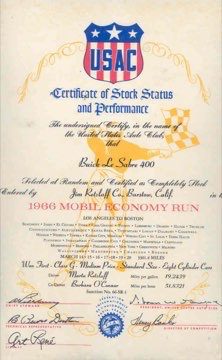 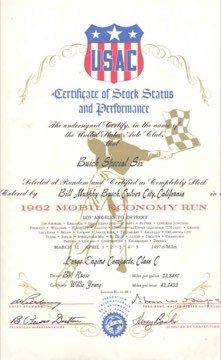 After nearly a decade in abeyance, 1950 was a propitious time to rekindle the Run. Automobile industry executives were touting new engine designs that were more fuel efficient and powerful.  GM engineers in May 1951 announced the development of a carefully timed, high compression engine with a better combustion chamber design which gave 40% more mpg than the Kettering V-8 in a Cadillac.

Concurrently, the Texas Company developed a new high efficiency engine that combined fuel injection with head design and spark ignition. And up for discussion in technical circles was a single valve engine design of Alex Taub and his associates that claimed enormous efficiency gains. Finally, the Chrysler Corporation unveiled its hemispherical head engine, or Hemi.

But the most powerful impetus towards gasoline conservation was the onset of the Korean War. Again there were fears of gasoline rationing similar to WWII, and by the fall of 1950 California oil was in such demand that it was no longer shipped eastwards. As one oil industry publication made clear, there was a “new national need for conservation of gasoline.”

And for years, the starter’s flag was dropped in downtown Los Angeles at 3 am by the flamboyant A.C. Agajanian. 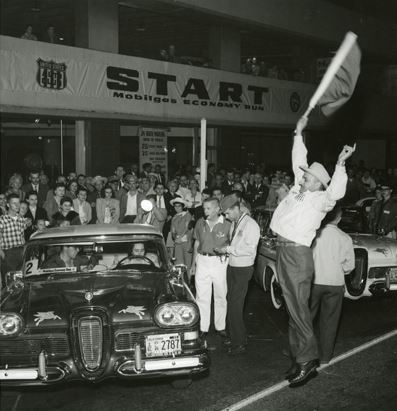 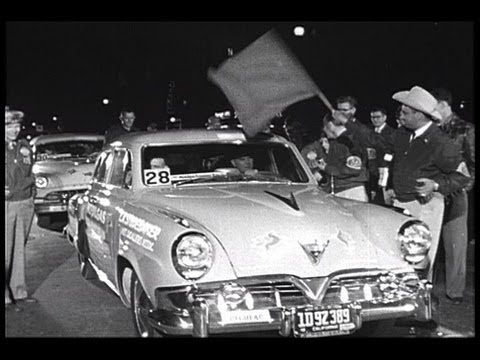 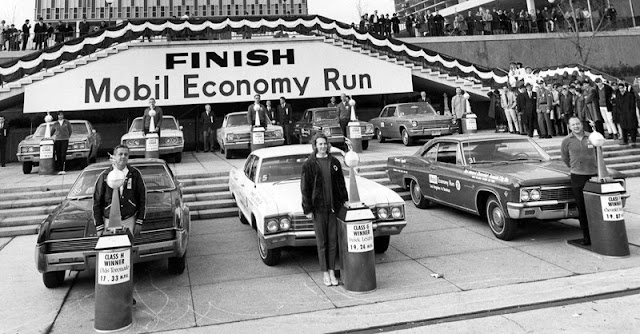 The 1952 run was a three-day journey to Idaho’s Sun Valley.

To understand the scale of this event, a news clipping from 1952 states 327 General Petroleum employees and 125 American Automobile Association deputies worked on eight prospective paths and pre-event prep.

Twenty-six cars competed that year, yet accommodations were needed for around 800 people when everyone was on the road. All cars had a primary driver, a relief driver, an independent AAA observer (a Cal Tech engineering student) to ensure the rules of the road were followed, and another passenger – four people in total

General Petroleum is former subsidiary of the Socony-Vacuum empire, which morphed into today’s ExxonMobil 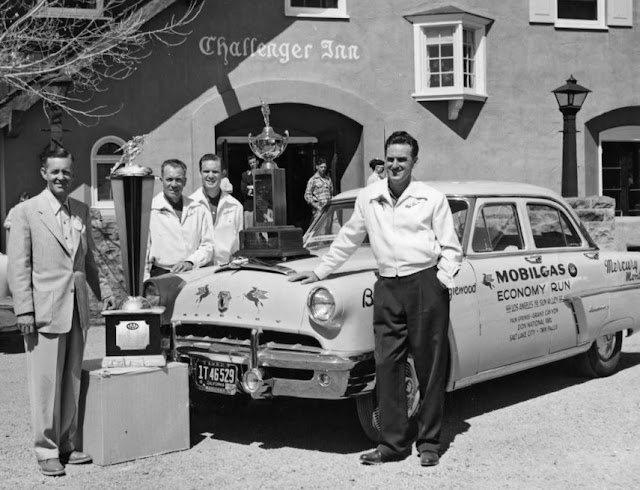 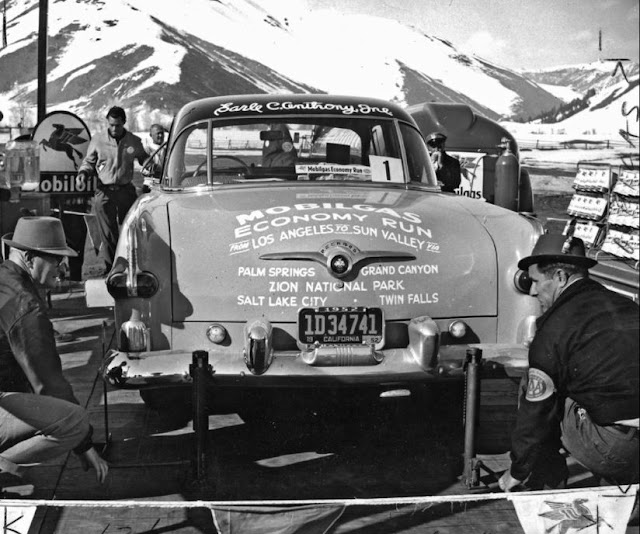 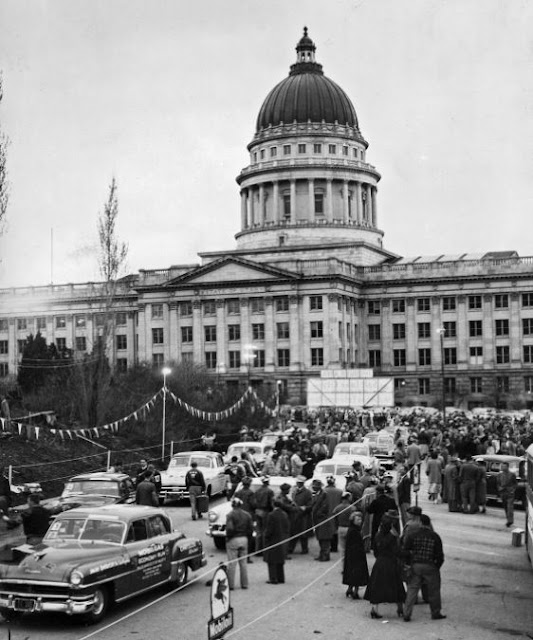 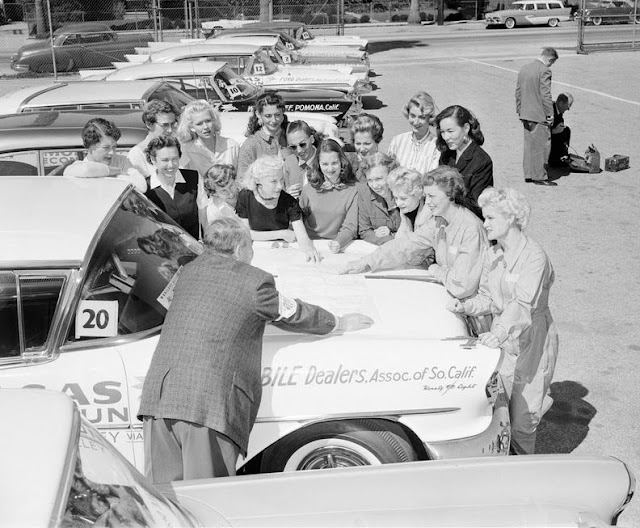 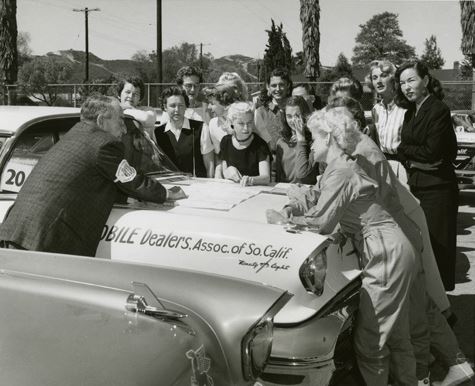 the next 3 images are from the 1957, which finally allowed women to participate http://www.gt350lady.com/Mobilgas.html 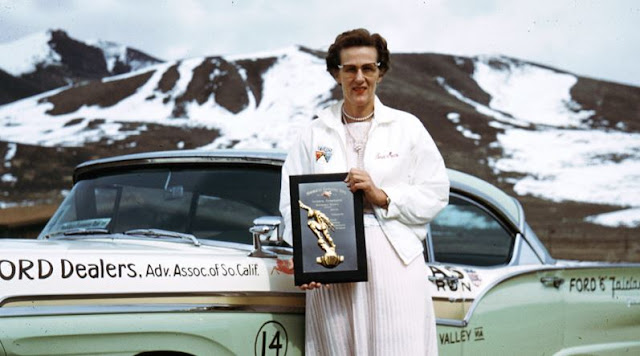 Ina Mae Overman drove in the 1957 Run, the first year women were added to the driver lineup. Her friend Lowell Lewis, one of the co-founders of the Tunderbird Owners Club of America, was instrumental in her acquiring this position. She actually came in second in her class, but since first place went to an identical make and model, it didn't count. She drove a 1957 Ford Fairlaine 500 6 cylinder. 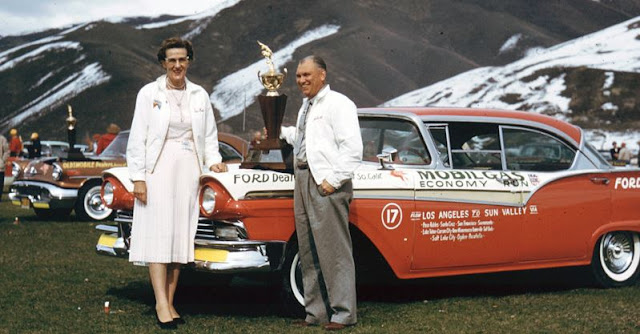 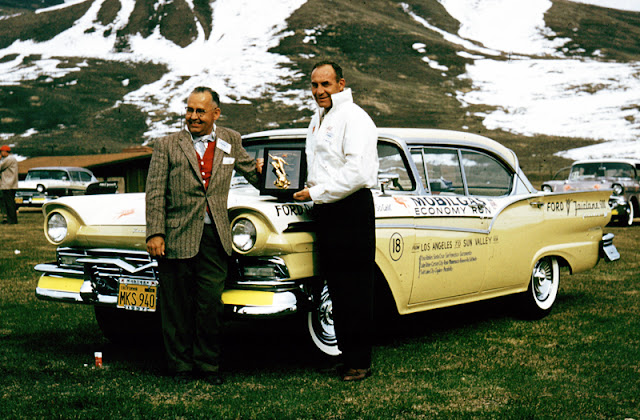 Al Cottle who at that time was a Salesman for Al Stuebing Ford (a long time Gilmore and Mobilgas Entrant). Al had a First Place Win in 1955 in Class "D" (High Price Cars) driving a Buick Roadmaster. He continued to particpate through the 1965 Economy Run the last several years driving a Mercury Monterey for Bob Estes in Inglewood.

Cars were classified according to cost and engine size, and were selected by the AAA Contest Board from showroom floors, dealer lots, or factory assembly lines. These vehicles were no different than the average American would own, and certified as stock. Minor changes could be made in terms of carburetor jets, timing, and tire pressures. Break-in runs were allowed, and that was when the rules were stretched.

While the main event took place in April 3-9,  the sealed cars were delivered to the teams in March, and each team was allowed 2,500 break-in miles. The object was to become familiar with the particular car and to figure out which driving techniques would coax the best mileage from it a few weeks earlier.

Since teams could not tinker with the cars they instead had a rigorous break-in schedule. The enemy of fuel economy is friction, both inside the engine and in the running gear — all the moving parts that can sap energy. So they set out to reduce the cars’ rolling resistance.

Tires were scrubbed to reduce rolling resistance, brakes worn down a much as practically possible, and support cars dragged chains in front of the race vehicle so as to have as much dust and sand enter engines minus air cleaners. Cars were impounded and sealed before the race, but despite the precautions, tweaking and break-in resulted in cars that were quite different from an everyday vehicle.

Each day they drove them as close to wide-open as was prudent in the mountain roads around Los Angeles.

The above white Ford 6 Fairlane 500 was a practice car

Mickey Thompson won his class driving Pontiacs in 1962 and 1963. With women entering the field in 1957, former sports car drivers Vicki Woods, Mary Davis, Myra Buchanan, Marian Pagan, Ina Mae Overman, Marilyn Miller (the wife of famous racer Ak Miller), and Betty Skelton distinguished themselves while at the same time demonstrating that women were, if not better than, at least equal to men in economy driving events. 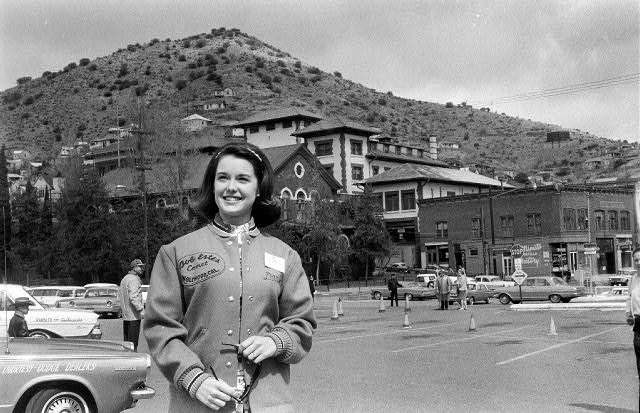 April 1964, The Mobil Economy Run from Pasadena, to New York City.
Darla Banks of Fresno was Miss Teenage America of 1963, and navigator for driver, Bo Jett of Atlanta. They were in Pasadena waiting to start the trip. 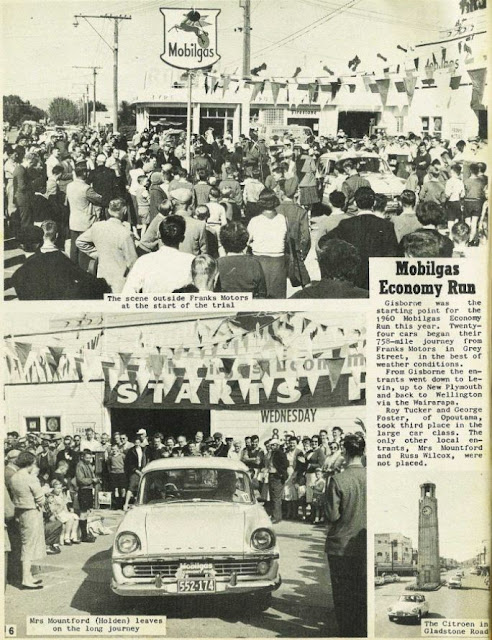 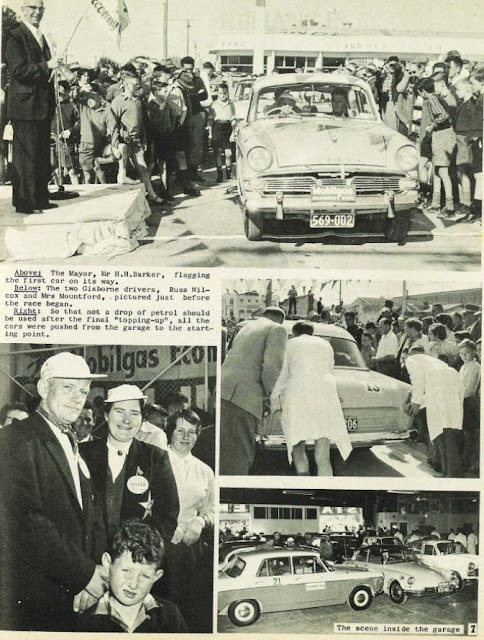 This video is really cool, it's a fantastic look at the mid 50s in the cars, the lettering on the cars, gas stations, etc etc. The narrator has a corny monologue he can't vary from, it's quite a propaganda piece about teaching young drivers, the darn hot rodders, how to drive safe around the good folks on the highways.... you know, the overwhelming old farts narrative from the 30s to the 60s

For hundreds of photos you won't find anywhere else, see http://www.autolit.com/Store/search.php?mode=search&page=7 because some Buick exec collected all the Buick related photos, of the cars, the drivers, the souvenirs, maps, etc etc and sold it all to this one site. There are amazing amounts of Buick related photos, and not much of any other manufacturer. There are some, but not many.