Ever wonder who created and built the Easy Rider chopper Capt America? We know who made it famous, and who restored them, and who made millions from them.... but who created it? Ben Hardy 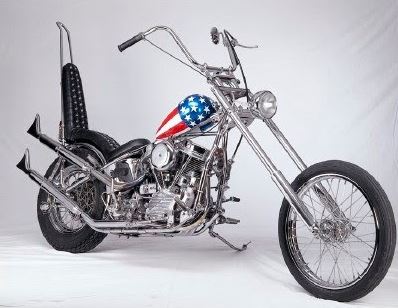 Peter Fonda, the producer of Easy Rider, hired Cliff Vaughs to coordinate the motorcycles for the film, and Cliff tapped Ben Hardy for the actual construction of the machines. Peter and Cliff both worked on the design of the bike. A drawing here, a sketch there, and then a final agreement to make it like this.

The whole story has been told on the Vintagent blog, and I can't add anything but increased awareness of all the research that's already done there on the story of the Capt America chopper
http://thevintagent.blogspot.fi/search?q=captain+america

Ain't it sorta odd that the most instantly recognizable vehicles were made by guys that aren't known for making more things? The Deuce Coupe the Beach Boys used on the cover of their album, and the Easy Rider chopper Peter Fonda rode.

Well, I insist that the right guys get the credit and respect they deserve. That's what they earned. I think business people and Hollywood types often try and grab undeserved credit, what ever they can do to get ahead... but I believe car guys are focused on the quality of something, and they want to know who to credit for that quality.

If it's speed parts, they want to know how made it. If it's a fast car, car guys want people to know who made it. If it's a beautiful car design, or a sweet paint job, we give the artist or designer the credit and respect. Simply because it's the right thing to do, and there's respect to be given, so we do that.

So, that's why it's important to me to post who did what, who made a thing, and who should get credit and fame for what they've done. Hell, that's pretty much what I do all the time.... tell you who painted, sculpted, built, or collected... or who won a race.

So today, it's Ben Hardy's day of appreciation. 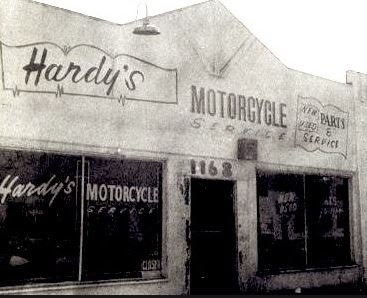 video from Jesse James’ ‘History of the Chopper’ TV series

you can even get more in depth on the Capt America chopper in the book:

He didn’t get the recognition he deserved for those bikes, partly because the whole crew was fired when Columbia Pictures took over production, and Ben and Cliff’s payout/signoff included a clause keeping them off the film’s credits.

Publications like Ed Roth’s ‘Choppers Magazine’ explored Cliff’s role in ‘Easy Rider’ from 1968 onwards, but both Peter Fonda and Dennis Hopper at various times claimed credit for building those bikes, and Dan Haggerty took credit too.