Who to bet on to crush the record, win the race, and dominate the field... the woman that biked 2100 miles to get to the 2800 mile race. She was just getting warmed up. You better not bet against her. Not many people who don't ride bikes for a living, or for long distances - like across continents - have heard of the people that do. Okay, we've all heard of Lance Armstrong, but you may already see where I'm going with this... he doesn't ride for distance, he rides to win the Tour de France.

There are some people who somehow can afford to not have a job, and maybe it's because they don't have to pay rent, because they never sleep in a bedroom...  they sleep on the roadside, in parks, or where ever they are when they realize they are too wiped out to keep biking.

Among them, is Lael Wilcox, and to read her blog is to see that the riders know each other, they meet up on the roads sometime, in this country or other ones, and some are just well known among the bikers that read biking magazines instead of Hot Rod, Rodders Journal, Automobile, etc.

Well, I was blown away to read that Lael rode TO the race from Canada to Mexico, a 2800 mile amateur race that I've only just learned of, the Tour Divide. Just how damn astonishing is it to ride 2100 miles to get to the start of a bike race? Blows my mind. But, going back to what I said earlier, only because I had no idea that all she seems to do in this world is ride a bike. Everywhere. For the last 9 years she's biked all over the planet. Europe, the middle East, Canada, America, Africa etc etc. So, for her, getting to the race was a thing that didn't even matter, it was just what was needed.

You can read her article about the race https://laelwilcox.com/2015/09/12/tour-divide-story/ but she doesn't follow it up with remarks about crushing the previous record, by 2 days, or what she did after... the next entry in her blog is her heading out on another ride.

But Outside Magazine did a story on her https://www.outsideonline.com/1997471/how-lael-wilcox-crushed-tour-divide

Who knew, she also runs for fun and did this REI video which really covers a LOT like the Tour Divide

For 2016, she rode the Trans Am (cross America) from Astoria Washington to Yorktown Virginia, a 4400 mile race.... and she won it. I didn't categorize that as "she won the women's category" no... she WON the WHOLE DAMN THING. And broke the record for doing it the fastest.

She's the first American to win it, and she's the 1st woman to win it. https://cyclingtips.com/2016/06/trans-am-lael-wilcox-wins-smashes-womens-record/   https://www.facebook.com/TransAmBikeRace/

Why isn't she competing in the Olympics? The Tour de France? Hell if I know.

For comparison to the worlds biggest bike race, the Tour de France 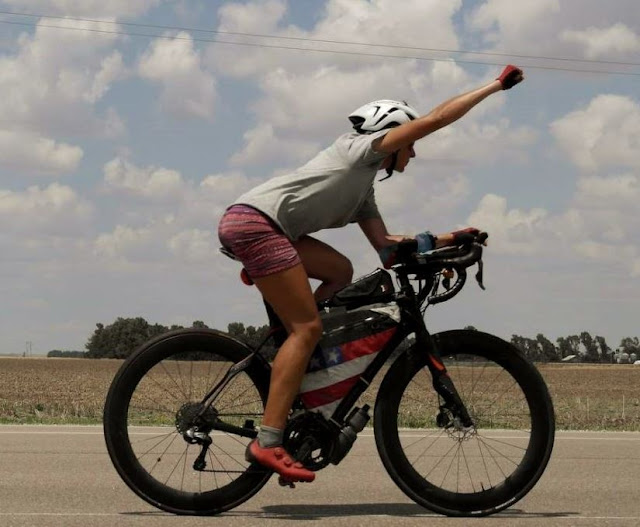