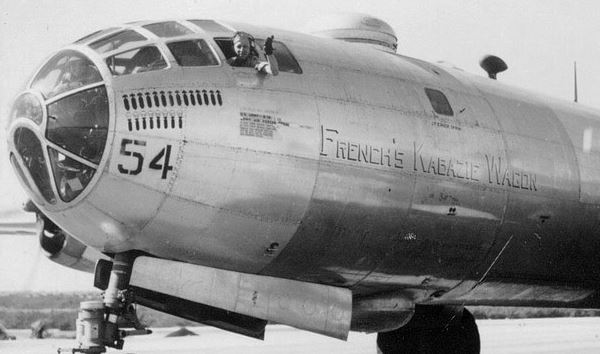 I'm not sure what are the 2nd row of symbols are, but they are smaller than the top row... Steve has the answer, aerial mines, M 26s, which were parachuted down into water, I suspect

Eric says that his grand dad was flight engineer, on this plane, and dropped a lot of POW supply stuff, and leaflets

Also, the pilot of the aircraft was named Jesse K. French, and Kabazie was a word for "junk" or "stuff" etc, growing up in Philadelphia.

Thanks Eric! That info is only accessible from that generation, and if you hadn't learned, it would be lost to history.
at Saturday, September 10, 2016

Labels: B 29, scoreboard and mission symbols