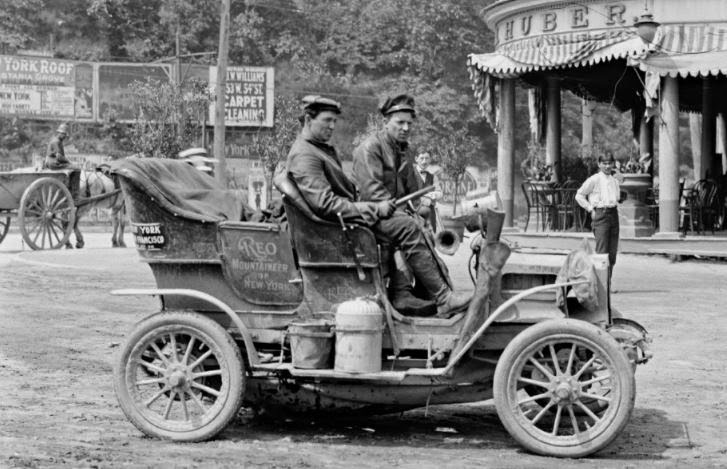 Percy Megargel and David Fassett in the Bronx at the end of their 10-month, 11,000-mile trip in a 16-horsepower REO touring car.

Why did they do it? Well, Old Steady and Old Scout had just made an endurance run http://justacarguy.blogspot.com/2014/12/old-scout-and-old-steady-endurance-race.html and Megargel was one of the drivers!

AND Ransom Olds had a reputation to create with the REO, now that he wasn't running Oldsmobile. So he hired the most likely guy to pull it off, and paired him with a respected REO mechanic 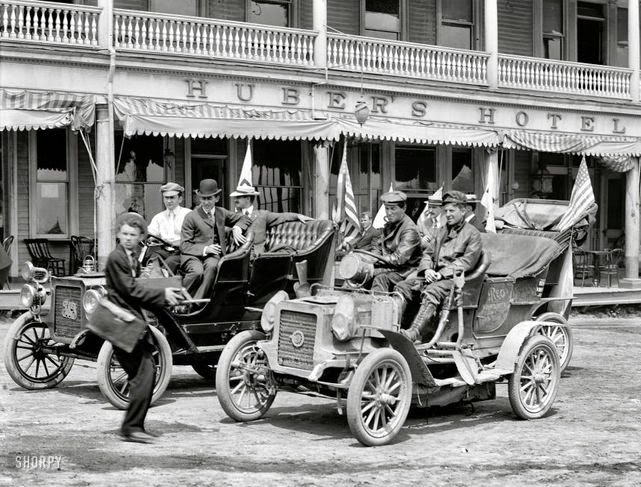 Mr. Megargel made the trip in the interest of the American Motor League, to gather reliable data with regard to the condition of the roads, the grades to be encountered, streams to be forded, distances from place to place, available stopping places and gasoline supply houses. The trip west was by the Northern route—practically the same as that traversed in the recent race to Portland in the Old Steady; from Portland he went south to San Francisco, and then returned to New York by way of Salt Lake City and Denver.

The Reo Mountaineer, was a regular stock touring car, of 16 rated horsepower. It was fitted with removable front seat, which permitted its occupants to sleep aboard. A 3-inch windlass was built into the front of the frame, to be turned by a 14-inch detachable crank, for the purpose of aid in ascending unusual grades, or drawing the car through the many mud holes so often encountered in the Western roads.

Percy and David declared that, in the Mountaineer, they could accomplish the first round trip journey from New York to San Francisco and back to New York in an automobile. They estimated 112 days to achieve this feat, which actually took ten months to finish.

The car was sucked into the quicksand of a river once, and three weeks later a flood from snow melt revealed the car again... and off they went. 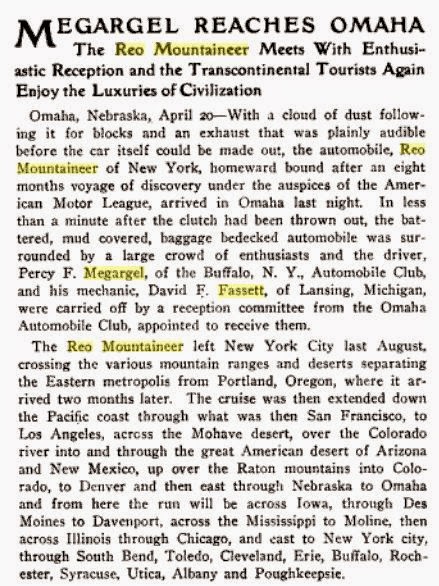 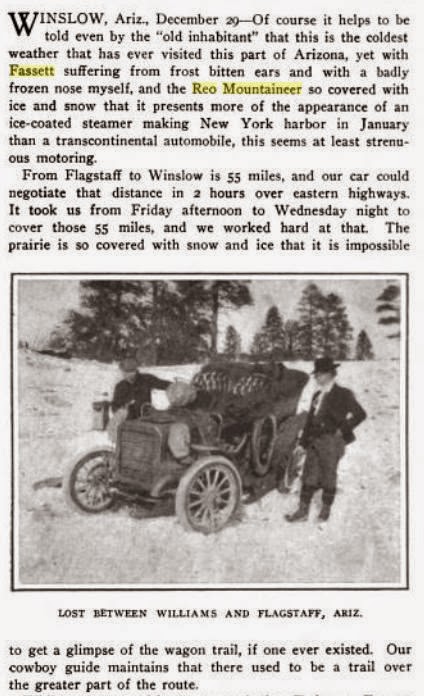 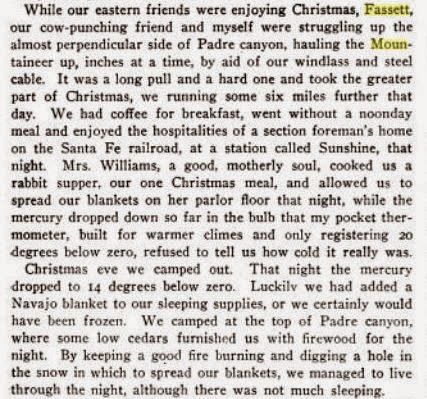 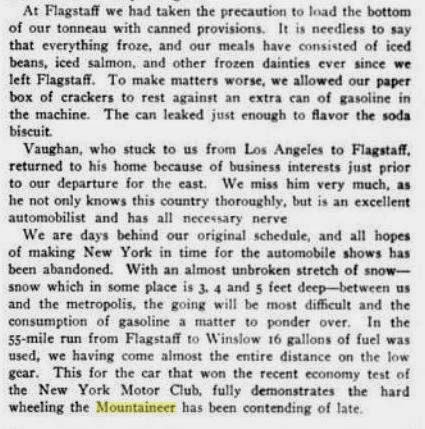 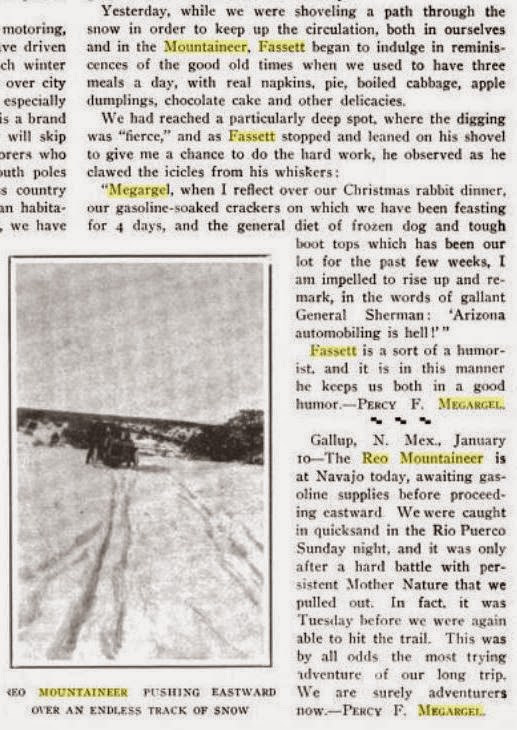 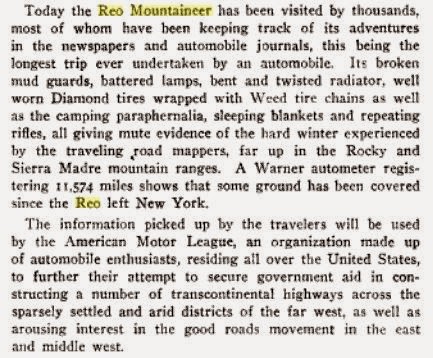 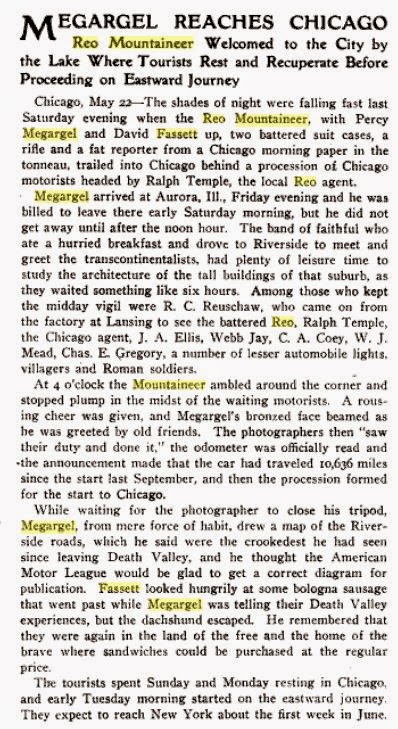 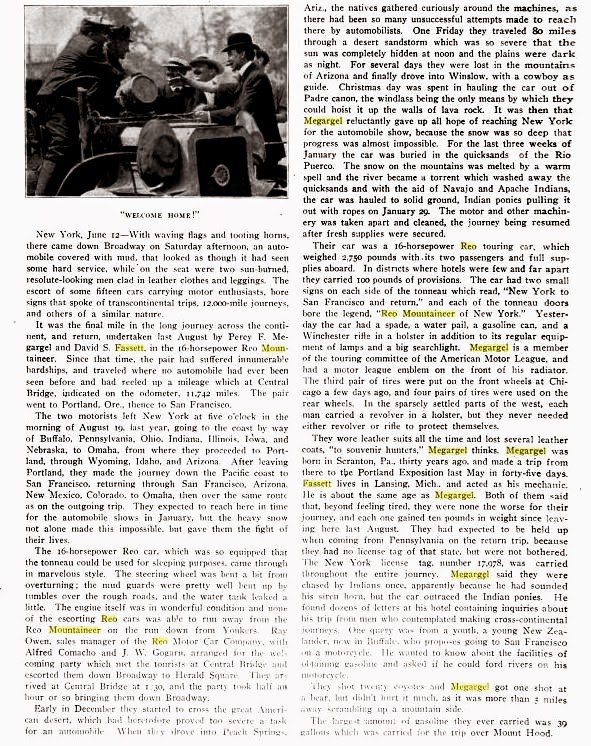 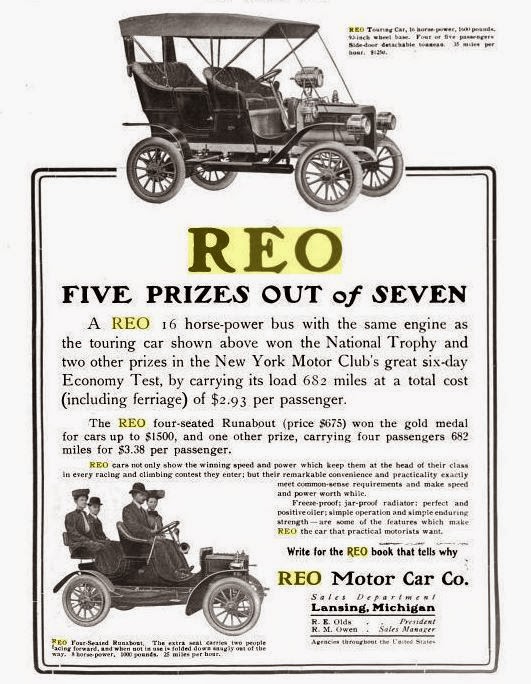 The clippings are original Motor Way and Automobile articles and advertising for the REO, from Google Books. It's an amazing resource for 109 year old magazines!

Two years earlier, there had been three notable transcontinental runs: Jackson and Crocker in the Winton, Whitman and Hammond in the Oldsmobile, and Fetch and Krarup in the Packard, all going from west to east.

For a detailed synopsis of these runs, see Scientific American, Jan 13th 1906, pages 24 and 25 https://books.google.com/books?id=nqMzAQAAMAAJ&pg=PA25&lpg=PA25&dq=Megargel+Fassett+REO+Mountaineer&source=bl&ots=vB6HpKuwyY&sig=4m1vNxpEWVKsnr0PLnV-hRUevjQ&hl=en&sa=X&ei=cjn1VPH9AsjLoATl5oLoAQ&ved=0CDYQ6AEwBzgK#v=onepage&q&f=false

But an even better write up that Google scanned at an easier size and clarity to read is in "The Strand" magazine, volume 31, pages 513 to 521 and can be seen here: https://books.google.com/books?id=eLQvAAAAMAAJ&pg=PA519&lpg=PA519&dq=Megargel+Fassett+REO+Mountaineer&source=bl&ots=4NvFGMCmYX&sig=Q0FhAfmNPn98xFqqIJyzDNawFTM&hl=en&sa=X&ei=r0j1VJz8CojooATKnYD4AQ&ved=0CDkQ6AEwBjgU#v=onepage&q=Megargel%20Fassett%20REO%20Mountaineer&f=false

Percy Megargel wrote up a book of the experience of  transcontinental endurance runs in the book, The Car and The Lady 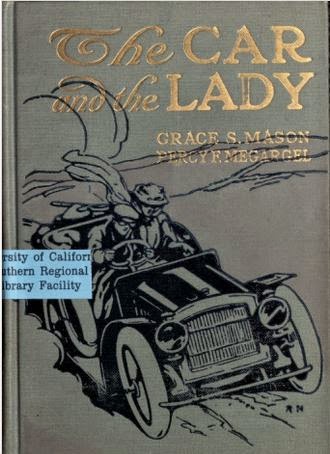 which can be read online at http://catalog.hathitrust.org/Record/007667025