Uh oh, I pushed somebodys button... everybody be on the lookout for a hostile Mustang owner... it's web rage! Run for your lives! 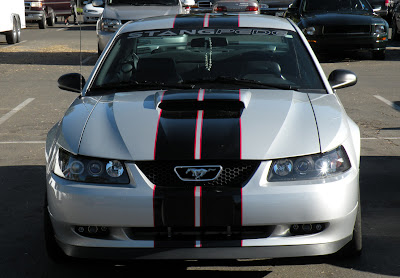 The above Mustang... is the pride and joy, maybe even great accomplishment and weekend race car, of one:
torqued off,
spun up,
stressed out,
over caffeinated,
ready to fight,
ain't taking no crap from nobody,
quoter of facts, and timelines of Fords models of the 90's.

But the owner of the above Mustang, was so mad from the moment that he didn't see a compliment about his Mustang, he went right off the deep end.
Step back from the energy drinks, put down the big book of Ford, and ask someone else to translate. Not Jerry though, he's not bright enough to discern that the car you own wasn't insulted, not were you, in my comparison of the model (sn95) you brought to the event... when I compared the (sn95) old design to the new design (s197).

If anyone cares to waste their time on this, I gave my opnion that the (sn95) design is a cookie cutter design by Ford, and similar to the Tempo, the T-bird, and the Taurus. They are all bar of soap designs. I'm not alone in that opinion, or in my opinion that you lost your mind when you weren't up to the challenge of reading comprehension of what I wrote. So I reposted it, and your comment. And then I re-explained my self. And you re-lost your mind. Really came unglued there... wow. A saying comes to mind... shattered. As in delicate personality that is shattered like a light bulb with the loud POP sound the moment something pushes it's button. Clean up on aisle Ford, a pile of molecules that used to be someones pride needs a dustbuster STAT!

You don't need to come unglued, unless your feelings were that hurt. Appearances matter to some, and it appears that you take my critique of Fords' design of the sn95 Mustang personally... this amused me to tweak your nose about it, (still does) and I poke fun at you for being so sensitive and tender... that you need to be awarded with a flower holder from a VW beetle to put on the steering column of your car.

jerry said...
jesse your a piece of shit "anonymous" is a friend of mine, he spent his time his money the customize the car the way he wants it, not for you but for him. next time your thinking about insulting someones car don't!
11:52 PM Jerry, take the time to type coherently, it's so much more enjoyable for the readers...

Anonymous said...
FYI...its sn-95 not sn-94
if you going to be a reviewer please get your model numbers right....-a guy who knows mustangs -
2:10 PM
I'm not a reviewer, (in my opinion) I'm a auto enthusiast who uses a camera, a laptop, and a forum of my creation to entertain my friends. Well, that was what I did 2 1/2 years ago, and somehow over time, all the rest of the 600-700 people a day started looking in and enjoying what I do, and I've gotten a lot of praise for doing it. You might be amused to know I've learned a lot by looking up a lot of info to add to this website, and it's amazing how much cool stuff there is everywhere that I put here, just for a couple of friends that didn't want me flooding their email with. Now, when they want to, they look here for what I was emailing them.

Due to the technology of Google, emails, and the internet, a lot of other people I never have met have also been enjoying this stuff I post. That's real cool.

Anonymous said...
thanks for posting my corrective comment. its very noble and i appreciate that you post criticisms from others. if its any consolation i bookmarked your blog and it will be a regular spot i check. you dont need to post this comment. just wanted to say thanks.
12:20 PM
You are welcome. And I thank you! I sincerely appreciate being corrected by people who know stuff. I actually looked up the Mustang models for that post, but didn't recall the number 95 correctly and was typing 94 through the whole thing.

the owner of the mustang said...
I just clicked and posted really quick, didnt do anonymous for any fear reasons by any means. I dont understand why you feel the need to insult and call me a dress wearing woman because I didnt post my name....but my name is (withheld to protect the identity during google searches) . I dont see what name posting proves, I dont think it proves manhood and I definitely dont think insulting someone who hasnt insulted me proves anything either, ( Really? You sure about that? Cause you are about to go off on a major rant! )but you do apparently, youre such a big man, ooh im so impressed you can trash talk on the net, wow your testosterone jock strap must be overflowing, should I just pack my makeup and tampons and go home since your SO much more of a man than I am or do you think you can pull your head out of your ass for one second to have an intelligent conversation?? You want to talk literal facts, that neither of the cars you stated look anything like a 99 and up Mustang. ( 1995 to 2004 is what I am asserting, I've got no idea where you found 99 and up ) In fact none of fords line looked like the new edge stang ( what is a new edge stang? ), tempos were discontinued in 1994 and replaced by the contour...5 years before the new edge mustang even came around, and the Thunderbird was discontinued in 1997 two years before the introduction of the new edge and then reintroduced ( I never referred to the retro T-bird ) in 2002 only to end again in 2005, the out going model didnt look like a new edge mustang and the 2002 was round and had a retro style which looked even further from a new edge mustang, do you want me to keep going and prove you even more wrong?? I didnt think so, get your facts straight and your eyes checked before you go comparing cars that look nothing like eachother to one another and hurling ( hurling? Really? )insults for no reason. (the reason is to poke fun at you for losing your mind at my comparison of 1990's Ford design department not having variety, instead you took it personally... you didn't design the Tempo, t-bird, Taurus, and sn95 Mustang did you? So glue yourself back together, take a breath, and lay off the caffeine for a little while... it's not good for you evidently )What is it that you drive that gives you such a sense of individuality and uniqueness???? ( ummm, you haven't looked at this website very much... try something new, try looking at the rest of the website, it compliments a lot of Mustangs, the club you belong to, racing stripes, aftermarket headlights, and even some SN95 Mustangs... but my muscle car is described right here on this top page, and photographs of my car are posted at least 3 times in the past 30 months and I point out that it's mine) ( and it isn't what I drive, it's what I have done since highschool that has brought about my sense of individuality and uniqueness ) I will be at next months (april) cars and coffee if youd like me to bring charts and graphs of how wrong you are by ford statistic and timelines of their vehicles and just how far your head is up your ass please let me know. Thanks tough guy!
12:14 PM
I'll see that challenge, and post right here my comparison of the bar of soap cookie cutter cars. I don't do charts and graphs in person.... they rattle around in the enormous cavern of a trunk my musclcar has. Plus, reading comprehension has proven to be too much for some ( not you of course ) people, so I'll use photos of the cars instead.

Ok? You just stay right there in front of your computer, and use a big towel to take care of the rabid frothing your anger is probably causing. Your opinion is already made up, but for the rest of the world that is laughing hysterically at what a dweeb you are acting like, due to your jumping the gun to be insulted over Fords designs... and not like Jerry states, the lack of insults about your customizations to your Mustang. I like the racing stripe actually, not that you asked. 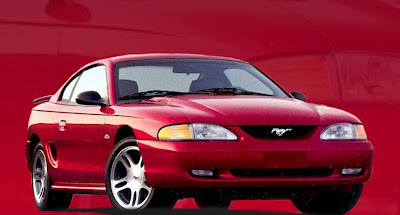 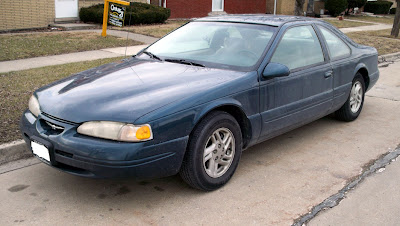 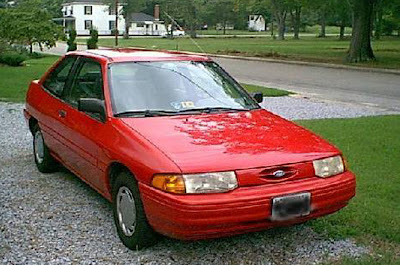 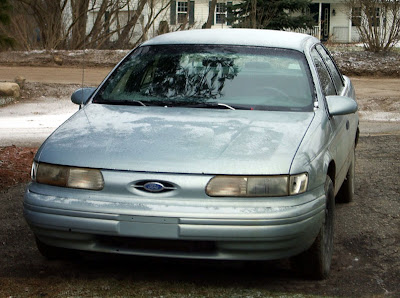 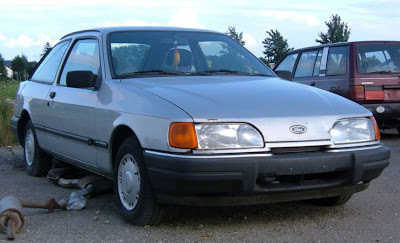 The only difference that can be quickly made of the above random selection of T-bird, Escort, Taurus, Tempo, and Mustang... is that the Mustang photographer took the time to put a wallpaper behind the stang, and the designers gave the Mustang fake brake air scoops in the quarter panels, and auxillary driving lights. Big deal. Ask people who don't give a damn, and they can't name the above cars, try it. Show them to teenagers, senior citizens, or all the rest of the world who hasn't owned a Ford.
at Tuesday, March 17, 2009