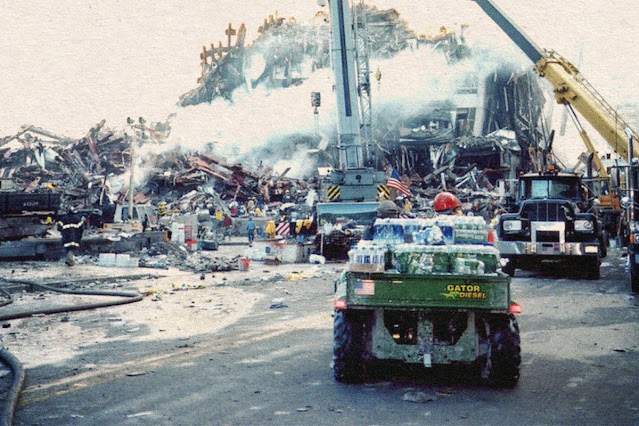 Tim Mullally has owned the John Deere dealership in Jeffersonville for 40 years, and he’s the one who has supplied the locals with their rugged UTVs. But these aren’t just any Gators straight from the factory; many of the vehicles you’ll find in the garages and sheds of Sullivan County, Hranek’s included, are the ones Mullally brought to Ground Zero in the aftermath of 9/11.

Half of his dealership was an Irish pub and the other half was a John Deere dealership.

"My representatives from John Deere were there that day,” he remembers of September 11, 2001. “We were writing an order and we were sitting in the pub, and my brother-in-law lived in Manhattan; he called up and said a plane just hit the World Trade towers.”

So Mullally did the same thing many people did when they first heard: he turned on the TV.

“I was up all night long watching this. You could see that later on they were using golf carts and this and that to try to move equipment and do whatever,” he says. “I knew right away that the Gator would be an ideal vehicle for that.”

Along with 2 John Deere territory managers, Mullally put together a plan, and the three quickly found themselves on a barge with five of the vehicles — beefed up with run-flat tires, brush guards and heavy-duty air filters — crossing the Hudson River over to Manhattan and into what Mullally describes as “bedlam.”

“There was nobody in charge. We’d stop people, firemen, whatever, and ask what we could do and nobody knew anything,” he says. “So all of a sudden somebody said, ‘Well, can you do this? Can you do that?’ So we split up and started using them to transport oxygen and acetylene tanks, anything that would fit in the bed to take to what they call ‘The Hole.’”

It didn’t stay disorganized for long. Instead of dropping off the vehicles, helping out for a bit and calling it a day, Mullally stayed in Manhattan running a Gator himself and organizing where the others would go, including dozens of additional vehicles that were shipped to the site over the following weeks.

According to John Deere PR, the company donated more than $500,000 in equipment at the time for use at Ground Zero, as well as the Pentagon and the crash site of ​​United Airlines Flight 93 in Pennsylvania. 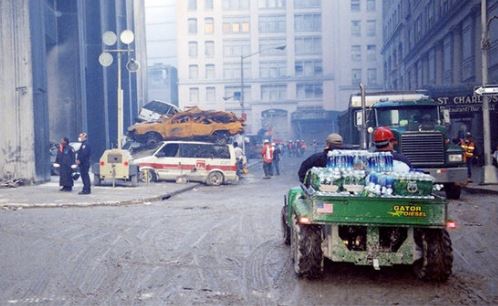 Mullally loaned them to the New York City Fire Department, the NYPD, the FBI, FEMA — any agency that wanted one. Going back upstate every night was initially unfeasible, so he stayed in his

Before going to his temporary home after a shift, Mullally recounts driving firefighters back to their stations throughout the city; the other option for many of them was to simply walk the long blocks carrying all their gear. While Mullally previously described one experience of “thousands of people on the West Side Highway from Canal Street up … cheering” for his passengers, reminiscent of the nightly cheers for healthcare workers during the COVID-19 pandemic, what he remembers today is the overwhelming sorrow of those drives.

But there were dozens of Gators beyond those donated, that Mullally needed to wrangle up in November once he and the vehicles were no longer needed in Manhattan, and getting them out was in some ways harder than bringing them in.

Despite equipment being readily available by then, Mullally says some people in certain agencies thought the Gators “were the spoils of war and wanted to keep them.” He found some on Roosevelt Island, others in a warehouse at the Fulton Fish Market, and he often had to steal them back, because “everybody was stealing them from everybody else.” He says “steal” because those who had them would sometimes remove the steering wheels or ignitions when the vehicles were parked, so Mullally carried around spare steering wheels and ignitions to get them back. Eventually he rounded up most of the UTVs that weren’t donated, bringing them to his dealership upstate, refurbishing them and selling them to folks around town. 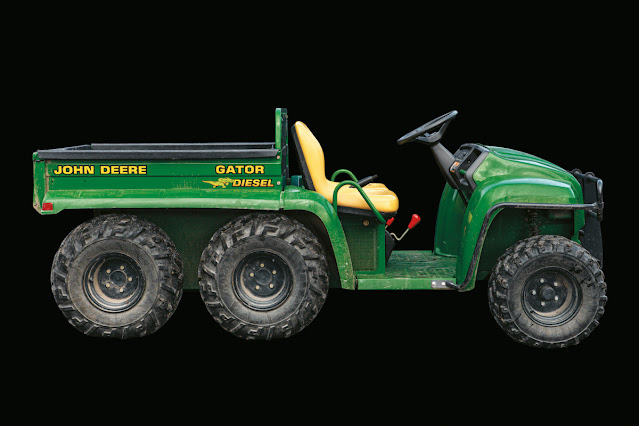 “When we bought our house Upstate, all my neighbors were like, you need a John Deere Gator! What happened was, after 9/11, John Deere gave all these Gators to the disaster site. When they were done being used, they brought them back, overhauled them and sold them.

My neighbor was like, ‘They have a whole bunch of these that came out of the World Trade that they’ve reconditioned, you should go buy one.’ I’ll tell you, I couldn’t live up there without it, I couldn’t have built my house without it. We have the most fun. I’ve taught my daughter how to drive with that thing.” Matt Hranek