Even more impressive was 1955 engineering. Leading the list of features was Torsion-Level suspension, an interlinked torsion-bar arrangement Nance acquired from a clever inventor, Bill Allison.

Operating on all four wheels, Torsion-Level was so impressive that Chrysler, which had planned to introduce torsion front suspension, put it off a year lest Packard claim its version was twice as good! A complicated electrical system allowed the suspension to correct for load and weight, and the interlinking of all four wheels provided truly extraordinary ride and handling, especially over very rough surfaces.

Basically, the entire car "floats" on four points, the front & rear opposite twist lever arms of two long (106" in Juniors, 111" in Seniors) torsion bars, one on each side. The major advantage of this arrangement is that any reaction at the wheel, such as hitting a bump or pothole, is transmitted to the opposite wheel (front or rear) and NOT the frame, greatly reducing twisting stress on the frame. Another positive effect to wheel reaction is that the opposite (front or rear) wheel reacts in the opposite direction, tending to keep the car dynamically level, in other words, very little pitch is experienced, if the shocks are in good condition.

Two additional short (46" in Juniors, 51" in Seniors) torsion bars connect the rear suspension with a levelizer mechanism. This electro-mechanical system, after a 7-10 second delay, applies more or less twist to the short torsion bars which lift or lower the rear. This keeps the car statically level, compensating for loaded weight such as additional passengers and/or luggage in the trunk. 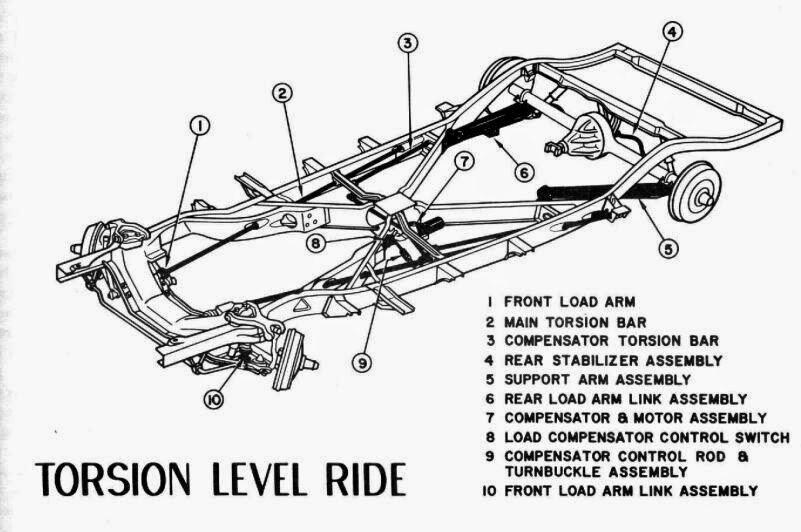