Glacier Girl, a P-38 of the "Lost Squadron" found 200 plus feet below the ice in Greenland 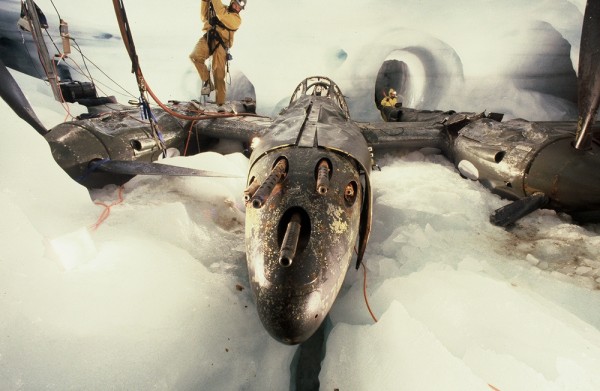 The squadron was forced to land on the Greenland ice cap on July 15, 1942 after hours of flying in bad weather and running low on fuel. Epps' adventure began as a lark when he was admiring a customer's new Learjet and the customer responded, "What I really want is a P-38". Epps certainly knew where six P-38 Lightnings were located so he joined forces with a friend and two airline pilots who already had the search and salvage rights from the Danish government.

The following story, originally published in the January 1993 issue of Air & Space/ Smithsonian,recounts adventures during the second leg of the journey, a 22-year slog through recovery and restoration that couldn’t have been completed without the ingenuity, stamina, and fortune of a Roy Shoffner, a Kentucky businessman, named the P-38 “Glacier Girl” and began to plan the completion of its mission.
http://www.airspacemag.com/history-of-flight/FEATURE-glaciergirl-backstory.html#


Fifty years later, in 1992, the plane was brought to the surface by members of the Greenland Expedition Society after years of searching and excavation. The aircraft was eventually transported to Middlesboro, Kentucky, where it was restored to flying condition. The excavation of Glacier Girl was documented in an episode of The History Channel's "Mega Movers" series, titled "Extreme Aircraft Recovery".
On 22 June 2007 Glacier Girl departed Teterboro Airport, New Jersey in an attempt to fly across the Atlantic Ocean to Duxford, England to complete the flight it had begun sixty-five years earlier. On 28 June, however, a coolant leak in the #2 (right) engine grounded the plane in Goose Bay, Labrador.
On July 22 2007 repairs were completed in Labrador, which included installation of two re-manufactured Allison engines. Glacier Girl returned to the U.S. on July 23, and can now be seen at air shows in the USA.
In 2007 Glacier Girl was sold to Lewis Energy's CEO, Rodney Lewis.
http://en.wikipedia.org/wiki/Glacier_Girl
at Saturday, August 03, 2013