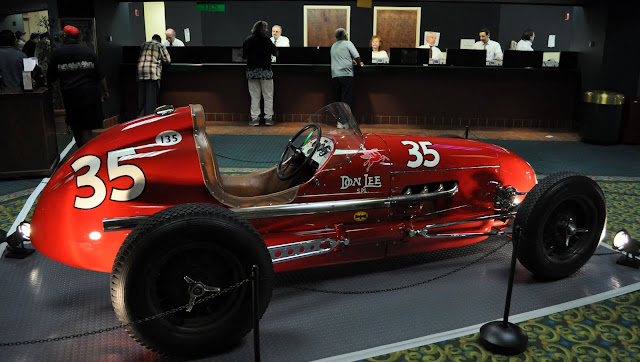 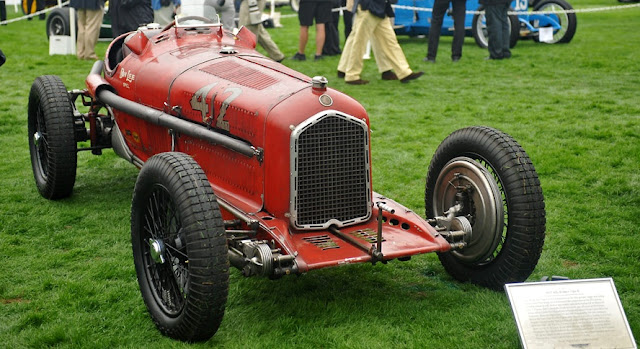 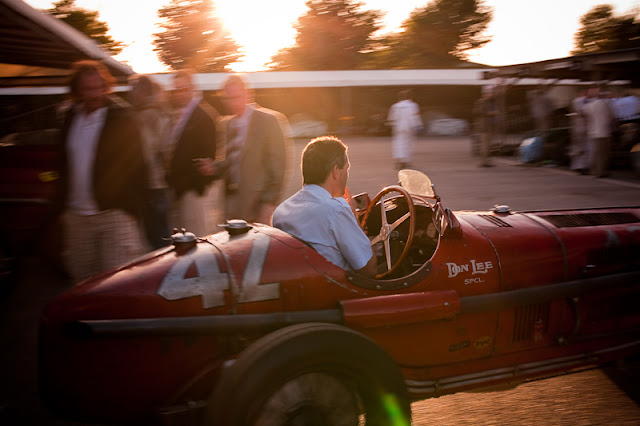 Above, The Alfa Romeo Tipo B or P3 Monoposto Chassis 50002 was the first genuine single-seat racing car in Grand Prix racing and it dominated the competition in the 1932 season, winning almost at will. Its first appearance came at the Italian GP at Monza on June 5.

It joined the Scuderia Ferrari-ran Alfa team in 1934 before being sold to Count De Villapadierni in Spain and later to Frank Griswold in San Francisco. After running in the 1939 and 1940 Indianapolis 500 and coming in first at the New York World's Fair in 1940, the car was sold to Tommy Lee in Los Angeles. Entered as the 'Don Lee Special' at the 1946 and 1947 Indy 500 it was driven by Hal Cole.

Above photo shows Luigi Chinetti watching the W154 getting worked on,
Below is the Mercedes-Benz W154 entered by Don Lee at the 1947 Indianapolis 500, it is chassis number 9, which after WW2 was discovered in Czechoslovakia. This was the car with which Lang had won the Coppa Ciano in 1938.

The car was sold to Don Lee, an American racing team owner. During 1938, the rules for the Indianapolis 500 were modified to allow the European Grand Prix cars to compete, and in 1947, Tommy Lee entered the W154 with Duke Nalon as the driver.

Nalon discovered that Riley Brett, an Offenhauser mechanic, had obtained some Mercedes engine blueprints. Nalon was able to make copies and from these, the team was able to prepare the engine. The mechanics started the engine but left it running on idle which caused the fuel to condense in the engine manifold. Due to the engine being mounted at an angle, the rear cylinders filled up with fuel, breaking the conrods and one piston. A new piston was hastily sand cast in time for the race.

Although Nalon set the second fastest qualifying speed, the qualifying system meant that he would start the race from 18th position. During the race, the replacement piston failed after 119 laps and the car had to retire from the race 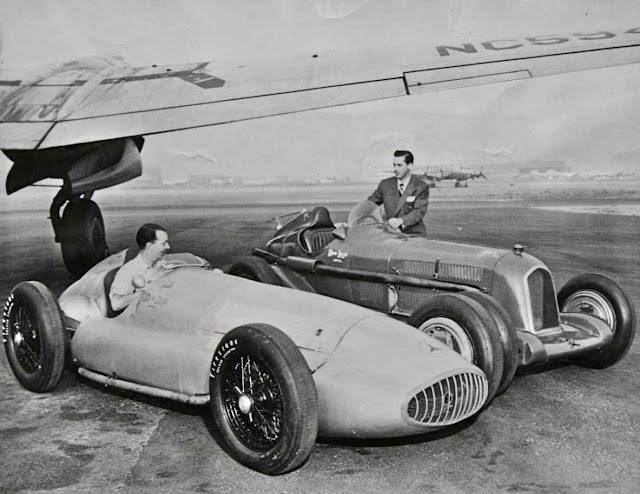 Photo credits, top one I took at the Del Mar Fairgrounds, from Conceptcarz, then Stefan Marjoram at the Goodwood festival, and bottom photo I was just sent by David

Don was the exclusive west coast distributor of Cadillac automobiles in the early 20th century. In 1919 Don purchased the Earl Automobile Works of Hollywood, California.

Harley Earl, the son of the company's owner, was kept on as manager. Renamed Don Lee Coach and Body Works, the company produced many custom designed Cadillacs for the rich and famous. Harley Earl left the company to become the head of General Motors styling department in 1927

Having amassed a fortune selling automobiles, Lee branched out in broadcasting in 1926, purchased or built 12 radio stations, creating his own  network, and having such a power base he put his transmitters and antennas on a hill in Griffin Park Los Angeles... now became known as "Mount Lee.".. .just above the Hollywood sign.

Don bought a 20-acre site on a mountain top at the eastern boundary of Griffith Park, widening the transmission field equipment to take in new thousands of homes in the Hollywood hills and the San Fernando Valley. The site is one and a half times higher than the top floor of the Empire State Building in New York. Mount Lee is thus the highest television location in the world. (Info circa 1937)

Part of Mount Lee was sold to Howard Hughes, who intended to erect an estate for his then current love interest, Ginger Rogers 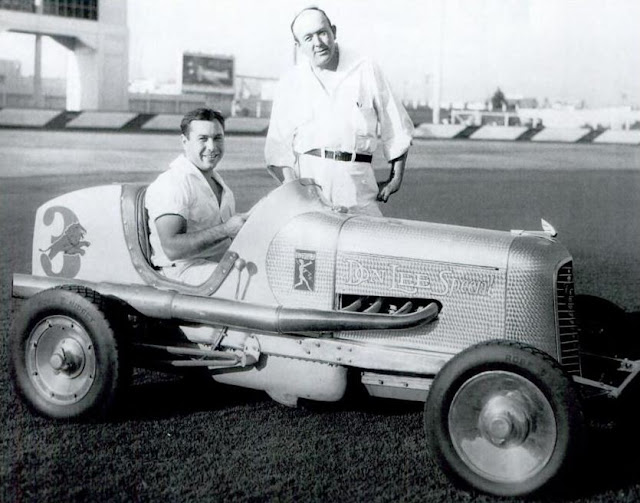 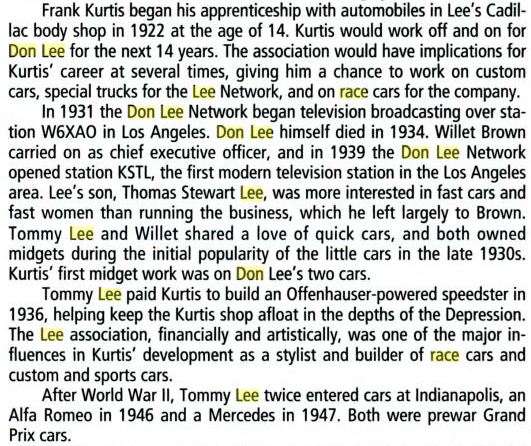 If you were living in California back in the nineteen-oughts, he probably watched four-cylinder Cadillac speedsters tearing through the countryside in those much ballyhooed city to city runs that often headlined the sports pages from 1905 into the WW1 era. Locally, team-Cadillac race drivers, running under the Don Lee banner (Don Lee was California's first and only Cadillac distributor), were as famous as Barney Oldfield - who they often competed against. Multiple Cadillacs regularly finished in the top five. Naturally, victory on the road racing and speedway circuit translated to enormous success in the showroom.

Cadillac and California were made for each other. Year-around motoring weather coupled with scenic attractions radiating in all directions led to extensive road building early on. Don Lee was among those who played a leadership roll in promoting State highway construction. By 1916 the roads in Southern California were being touted as the most advanced in the nation. From the sportsminded millionaires who wintered here at the turn of the century, to the subsequent flow of wealthy tourists who came to see the sights and ended up staying, Cadillac was the Southland's foremost luxury car. From the very beginning, an estimated ten percent of Cadillac production was allocated to California. Don Lee provided sales and service through a statewide network of urban master dealerships, with sub-dealers handling the suburban and rural areas.

Quite the remarkable connections, Frank Kurtis, Howard Hughes, Harvey Earl, Harry Chandler. The time and places of our lives affect a lot.
at Saturday, December 17, 2011