Von Dutch on the Mothersills Special of Carl Borgh, a 1948 Class A record holder at B-ville 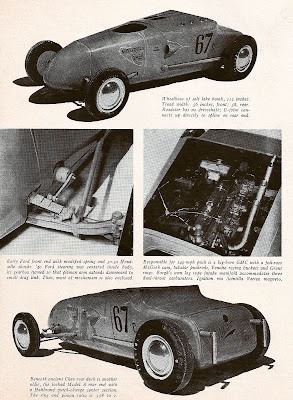 The Roadster was the “Cover Car” for the Hot Rod Magazine in March 1949 and the “Hot Rod of the Month” with a feature article. The above photos are from the 1956 article about it's 2nd life when owned and raced by Carl Bough.

Spurgin & Giovanine once again raised their own record when they raced the two-way runs in an average speed of 123.655 mph, after having qualified at 125.52 earlier in the day.

This gave them a perfect score in S.C.T.A. class competition in placing first and setting a new record in their class at every scheduled meet of the season.

This most incredible feat brought them a total of 1800 points and won the Spurgin- Giovanine Roadster the title of Seasons Champion for 1948.

To win an event in 1948, one had to qualify at a world record speed, and run an A and B run at the world record speeds. The car was the Cover Car and the Hot Rod of the Month with a feature story in the March 1949 Hot Rod Magazine.

" I would like any information and comments from anyone regarding what they remember of the Spurgin-Giovanine Roadster as it had quite a long run and it was one of the stars of the Albata Club. If there are any photos or historical information...it would be appreciated. I am going to have Tom Fritz do a painting as he is the ultimate master of the low orange yellow sun and swirling dust from the clay pan. Thanks and I will keep you updated. Ernie Nagamatsu " http://www.hotrodhotline.com/feature/heroes/landspeedracing/2009/09newsletter93/