Lindley Bothwell had a massive car collection in the late 1950's 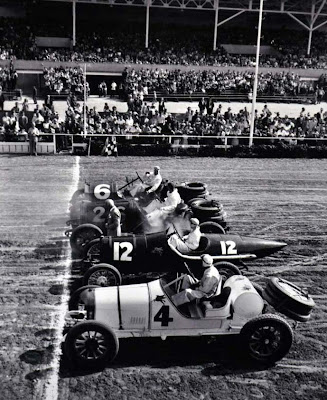 Lindley Bothwell had a great collection: a 1913 Peugeot grand-prix car that was the winner of the 1916 Indy 500, the Vanderbilt Mercedes that was William Vanderbilt's family car, the czar of Russia's Rolls-Royce--about 75 cars in all. He loved and kept them throughout his long, happy life.

Because he wanted to race all of his great old race cars as much as he could, he virtually created vintage racing in the Unites States in the 1940s and '50s. He re-created the original Santa Monica road races more than 50 years ago, for instance. Sometimes, the starting grids of his races would have only his cars in them. He didn't care; he was having fun and so were any of the good friends lucky enough to be invited to drive.

The 1908 Benz once campaigned by Barney Oldfield raced up the hill at Goodwood only a couple of years ago, family friend and volunteer restorer Rick Rawlins driving with Ann riding a thrilling shotgun as the crowd flew past.


The wonderfully nostalgic racing cars on the following pages are the pride of Lindley Bothwell, the California citrus rancher who invented, while an Oregon State cheerleader, the card stunts that since have decorated an implausible number of Coast football games, and who serves today as the Los Angeles regional executive of the Sports Car Club of America.
At 12 Bothwell discovered the allure of speed by whizzing down Los Angeles' Cahuenga Pass at 50 mph on a high-wheeled coaster cart. In 1926 he bought his first old car, a 1901 Olds, and two years later a 1909 Benz driven by Eddie Hearne and a 1907 Stearns which had known the heavy foot of the great Barney Oldfield. Today Bothwell has 18 veteran racing cars, 16 of which are shown here—all fitted with the riding mechanics' seats that typified the racers of a lusty bygone era.
There is no Walter Mitty in Bothwell; he races those clattering antiques himself, and his competitors have included such spirited leadfoots as Duke Nalon, Henry Bans, Jack McGrath and Manuel Ayulo. Bothwell's racers may be seen five or six times a year at events on the Coast and on Catalina Island. His chief regret is that no one else west of the Rockies maintains a similar stable, against which he might have a rousing series.
The particular jewel of this group is the No. 66 boat-tailed Peugeot (see page 122) with which Dario Resta won the 1916 Indianapolis "500" ("I think he would sell me before he would sell that car," says Mrs. Both-well thoughtfully). Bothwell took it to the Brickyard in 1949 and turned an exhibition lap at an amazing 103.25 mph. Resta had won the 1916 event at the relatively leisurely pace of 84 mph.
Besides the racers Bothwell has a tidy collection of 69 other cars, and if you think his acquisitive interest in rapid transit ends there, you are mistaken, because he has five old Los Angeles streetcars in his barn as well.
Racing at pebble beach, three of Lindley Bothwell's rapid antiques recapture the flavor of the automobile's toddling days. From top: a 1913 Stutz once driven by famed Bob Burman, a 1916 Hudson and a 1910 Buick.
Gleaming lineup of vintage racing cars is displayed by California Owner Lindley Bothwell. All are kept in top racing condition. From bottom: 1914 Ford, 1913 Peugeot, 1907 Stearns, 1909 Pope-Hartford, 1913 Stutz, 1908 Benz, 1907 Packard, 1914 Ford, 1909 Benz, 1910 Buick, 1909 Mercedes, 1914 National, 1916 Hudson, 1910 Simplex, 1905 Mercedes and 1912 Cadillac.

For relaxation, Bothwell collected vintage cars.
Bothwell pictured in 1943 with a few collectibles from his antique car, tractor and trolley collection.
By 1954, he had amassed the largest private collection of antique automobiles in the country, outside those held by public museums. At its peak, his fleet numbered 88 different cars, many of which were drenched in history, including the Czar of Russia’s 1911 Rolls Royce; English King George V’s 1910 Daimler; Henry Huntington’s (Southern Pacific railroad magnate) 1912 Lozier; Indy 500 speedster Dario Resta’s famous 1913 Peugeot; and two of racing legend Barney Oldfield’s most famous machines, his 1907 Stearns and a 1907 Benz. The collection’s oldest exhibit was a 1898 Locomobile steamer.
Five years earlier, Resta’s Peugeot had played a special role in Bothwell’s life. He used it at Indianapolis in 1949 to receive his driver’s certificate qualifying him to drive there. In doing so, he broke a 30-year record at the track by driving the highly prized racer to a speed of 103 miles an hour in the Veteran’s Class.
Bothwell held an official driver’s license with the contest board of the American Automobile Association and was a charter member of the Horseless Carriage Club of America, for which he served as national president for seven years and on the board of directors for 10 years.
Bothwell also collected horse drawn streetcars and during his lifetime was the only person in the world to have such a collection. To keep them in working shape, he built a streetcar barn on his ranch and had over a mile of track put down to entertain family, friends and visitors.
He is also remembered as having a great love for the water. He was a pioneer surfer, maintained a small fleet of crew shells and could often be seen "training" along the California coast at Long Beach or out near Catalina Island. He would often row as a twosome with his son Lindley Jr.