Happy Birthday Chuck Yeager! (sorry to be a day late, I missed your invite to your party somehow) 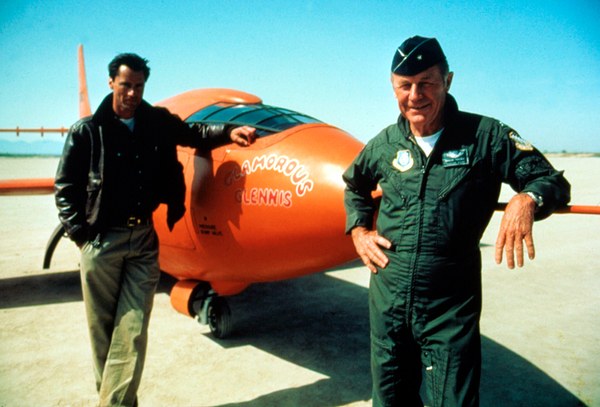 YEAGER: Some of my friends played extras, I played a bartender.


PHILIP KAUFMAN: We started looking around for someone who could play Yeager. Then my wife, Rose, and I went to a poetry reading in San Francisco and Sam Shepard was reading. Rose poked me and said, “There's your guy.” I said, “For what?” She said, “Yeager.” Sam had a cowboy quality to him.

CALEB DESCHANEL: When we were at Edwards Air Force Base, we really had the run of the place. We'd be right along the runways. Some pilots would get ticked off because we were too close. But Yeager was with us a lot of the time. One pilot landed and was like, “Who the hell are you?! What's going on?! Who's in charge?!” Finally Chuck Yeager turns around, and the guy's face suddenly fell. He said, “Oh, General, I'm really sorry, I didn't realize that you were with these guys.” You could do anything you wanted at Edwards as long as Yeager was around.

SHEPARD: When I first met Chuck, he had an old Ford pickup. Out there by Edwards it's very flat, and all the streets are perpendicular to each other; he would get up to about 85 miles an hour with his cruise control, and he would hit these intersections without touching the brake. Every once in a while you'd see a car coming from a distance and it was heading right where you were heading, but Chuck would not put the brake on. He would just keep going.

He was also "party guest" in Smokey and The Bandit II, and did a cameo in I Dream Of Jeannie!