The cyclist who saved Jews in wartime Italy, Gino Bartali, the most renowned Italian cyclist before the Second World War, having won the Giro d'Italia twice, in 1936 and 1937, and the Tour de France in 1938 and 1948 thank you Doug M ! 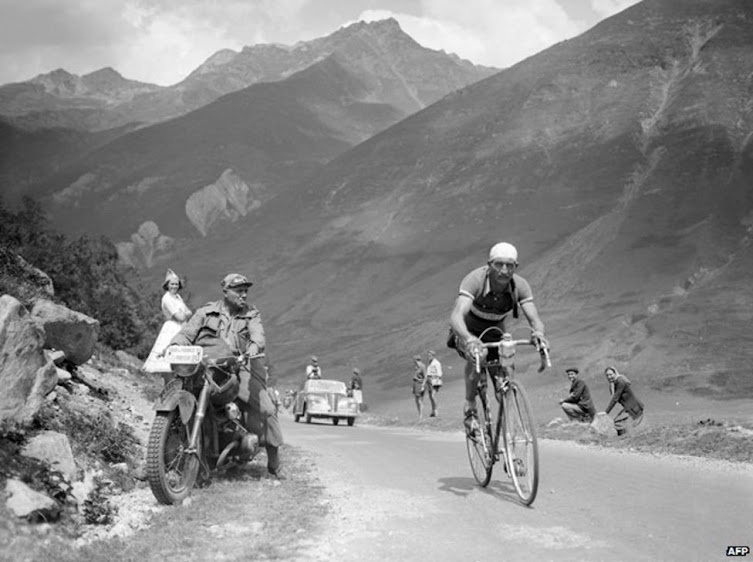 In the middle of the 1938 Tour de France, Mussolini published a Manifesto on Race, which led later to Jews being stripped of citizenship or any position in government or the professions.
Italy remained, however, a country in which Jews could take refuge, until it surrendered to the allies in 1943. The German army then occupied northern and central parts of the country and immediately started rounding up Jews and sending them to concentration camps.
At this point Bartali, a devout Catholic, was asked by the Cardinal of Florence to join a secret network offering protection and safe passage to Jews and other endangered people.

His role in the network was uniquely suited to his talents - he became a courier. On the face of it he was undertaking the long training rides for which he was renowned, but in reality he was carrying photographs and counterfeit identity documents to and from a secret printing press, because he was  was known to cover large distances with his bicycle for training purposes, he hid forged documents in his bike frame and handle bars, forged documents that were produced by the Assisi network, another rescue operation initiated by Church people in that town.

When Bartali was stopped and searched, he specifically asked that his bicycle not be touched since the different parts were very carefully calibrated to achieve maximum speed.

"We've seen documentation that he travelled thousands of kilometres across Italy, travelling the roads between cities as far apart as Florence, Lucca, Genoa, Assisi, and the Vatican in Rome," says Jacoby.
In addition to this, Bartali hid his Jewish friend Giacomo Goldenberg, and Goldenberg's family.
"He hid us in spite of knowing that the Germans were killing everybody who was hiding Jews," Goldenberg's son, Giorgio, says
When asked why he refused to talk about his incredible humanitarian work, he said, 'You must do good, but you must not talk about it. If you talk about it you're taking advantage of others misfortunes' for your own gain.'"
And so, the facts were nearly lost to history, Bartali’s son said that one day his father Gino sat him down and told him about what he had done during the war. He told his son that it isn’t important that people know the good that you do, just so long that you do good deeds for others.
His son then asked, “Then why tell me what you’ve done now?” Gino answered, ” Because one day my deeds will be very important for everyone to know and remember.” 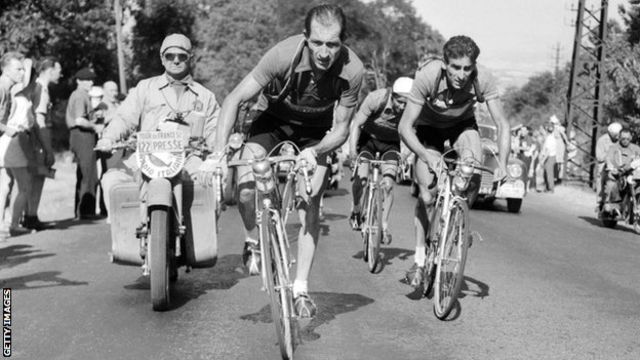 Gino began to work at a young age, laboring on a farm and helping his mother with embroidery work.
At the age of 11, in order to attend middle school in Florence, Gino needed transportation. With his own earnings and with help from his father and sisters, he purchased his first bicycle. While riding the hilly roads of the region, Bartali started to develop and refine his racing skills. In 1931, at the age of 17, he won his first race.
On June 10, 1940, Italy declared war on France and Great Britain. In October, Bartali was called to active duty. Because of an irregular heartbeat, he was assigned to be an army messenger. Allowed to use his bicycle for his missions, Bartali was able to continue training and racing for the next three years.
As the war progressed and cycling races were cancelled, Bartali's cover began to appear less credible. In July 1944, Bartali was interrogated at Villa Triste (Sorrow House) in Florence, where local Fascist officials imprisoned and tortured their prisoners. Fortunately, one of Bartali's interrogators happened to be his one-time army commander, who convinced the other interrogators that Bartali was innocent of any charges.
He went on to win the Giro d'Italia in 1946. With a stunning performance in the mountains of France, he won the 1948 Tour de France (10 years after his first Tour de France victory). 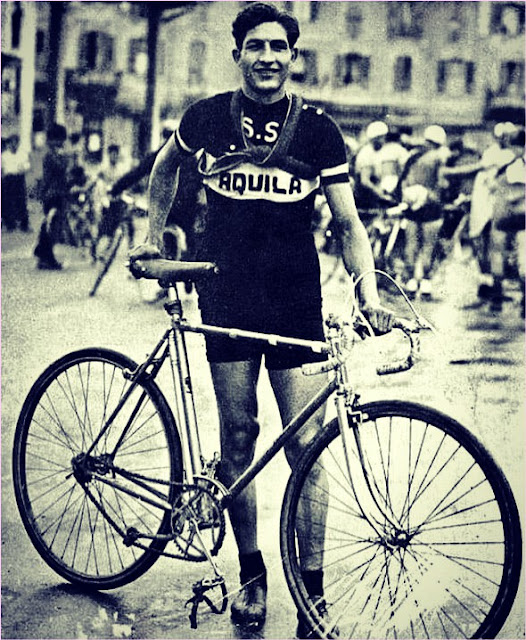 A school for cyclists, in honor of Bartali, will be based at Ben Shemen Youth Village in Israel, and will officially open in September 2019.
The program will offer children between the ages of 14-17 the opportunity to apply to attend a course dedicated to training riders in mountain biking, road cycling, BMX and track cycling.
Up to 24 children from across the world will be accepted onto the course with the program dedicated to involving participants from all different faiths and socio-economic backgrounds.
https://www.bbc.com/news/magazine-27333310
https://www.yadvashem.org/yv/en/exhibitions/righteous-sportsmen/bartali.asp
https://encyclopedia.ushmm.org/content/en/article/gino-bartali
https://www.cnn.com/2019/05/02/sport/gino-bartali-academy-yom-hashoah-spt-intl/index.html
https://myjewishdetroit.org/2014/01/01/gino-bartali/
you might not notice if I do not mention it, but Barteli makes only the 30th person to be tagged a hero on my blog, of 48,200 posts. 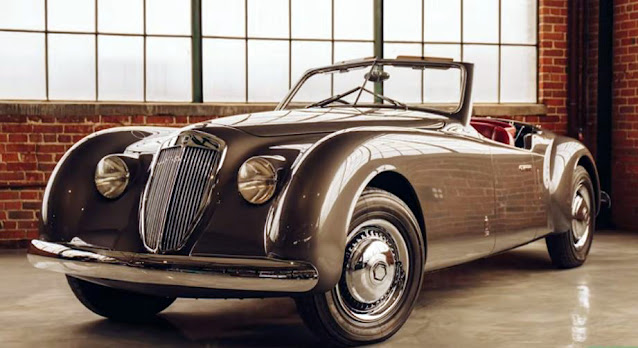