I never heard of this before, a toll plank road from Memphis Tennessee to West Memphis Arkansas (thanks Steve!) 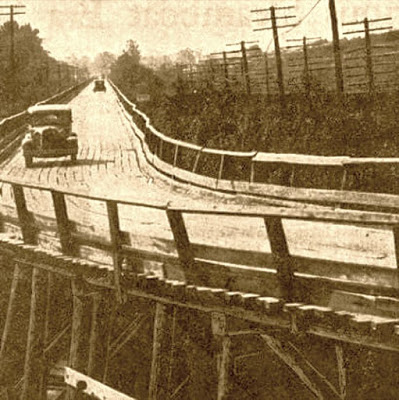 This has me wondering what road it is, (Interstate 40? or Interstate 55) and while looking into that, came across the following info on early roads out of Memphis

The Memphis to Little Rock Road, also known as the Military Road (as were most of the early Arkansas roads constructed under the auspices of the U.S. Army), was authorized on January 31, 1824, when the U.S. Congress passed an act for construction of a road opposite Memphis, Tennessee, through the swamps of eastern Arkansas to the territorial capital of Arkansas at Little Rock (Pulaski County).

The superintendent of the Memphis to Little Rock (Interstate 40)  Road began in January 1826, with instructions to make a road “at least twenty four feet wide throughout” with all timber and brush removed and stumps cut as low as possible, marshes and swamps to be “causewayed with poles or split timber,” and ditches four feet wide and three feet deep to be dug on either side of the road

Though it was finished, the road faced harsh conditions, particularly in its eastern reaches, which were subject to severe flooding and were impassable for several months each year. In 1832, and 1834 it was improved, the latter year bringing about substantial improvement, when contractors were paid to construct an embankment “twenty four feet wide at the top, with suitable slopes, which shall be three feet above highest water” in the first four miles of the road, “creating a continuous levee, from the bank opposite Memphis to the highlands on the South Side of Grandee lake.”

The contractor used oxen and scrapers to create the embankment. Though the initial miles opposite Memphis proved difficult, twenty-three miles of the road were completed by November 1834

But construction of the Memphis to Little Rock Road opened an overland route between the Mississippi River and the state capital, the importance of which led the Gazette to observe: “We venture to assert that that there is no one single subject of so much importance to Arkansas as the having of good roads from the interior of the country, to the Mississippi river.”

But heading south from Memphis, is also interstate 55, which may be a continuation of the elevated plank road in the image above.

Whitehaven,  a part of Memphis, is the largest neighborhood in South Memphis and the major traffic artery of the community is U.S. Route 51, later known as Elvis Presley Boulevard.

This roadway began as a toll "Plank Road" built between Memphis and Hernando, Mississippi in 1852.