had you heard of the guy that had himself welded inside a car in 1949, and claimed he'd tour the 48 states in a year and not get out? 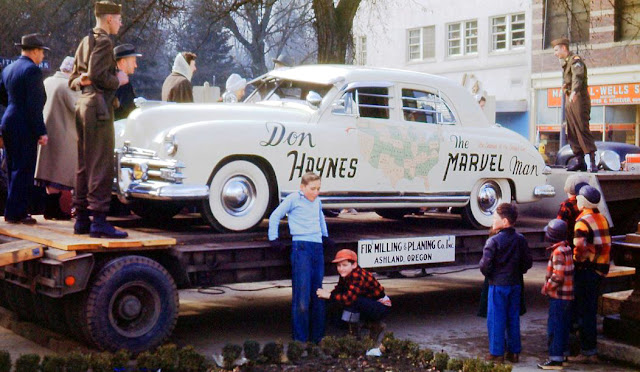 It was discovered that the car had removable floorboards, so that Haynes could slide out when he had car trouble and needed to shower and clean up.

Newspaper accounts identified him as having been a truck driver and former merchant seaman who had a $25,000 bet with a rancher named Mulden

Jack Mueller, of the Kaiser-Frazer Owners Club International, says that a man named Mulden, with whom Haynes made his barroom bet, was from Montana. Mueller says Haynes went to the Kaiser factory in Willow Run, Mich., for the car, and arrangements were made to have the Marvel Man stop (for a fee) at dealerships. 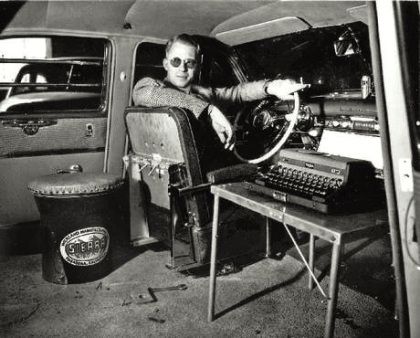 Haynes was given a brass-band send-off on Feb. 18, 1949, in Ashland. He left in a Kaiser fitted with a commode and a typewriter and bars welded over the windows. He returned in March 1950 saying he'd fallen short of his goal and was looking for a job.

In one of the most unusual episodes of his original adventure, Haynes drove back to Ashland in April 1949 to visit his wife as she was giving birth to a daughter (the couple also had a son). A photo shows the Kaiser, with Haynes inside, being lifted to the hospital window by an industrial hoist.

That is quite the stunt for free publicity.

in February 1950, when the Charleston, W.V., Daily Mail reported that Haynes made a bet with Art Linkletter, of the radio show "People Are Funny," that he could collect the pajamas of the nation's governors.

The pajama-collecting theme surfaced in July 1950, he popped up in Iowa, described as "a man who collects gubernatorial pajamas." He got the PJ bottoms of Iowa Gov. William S. Beardsley, which he said would become part of a quilt to be auctioned off on a radio show to benefit the American Cancer Society.

In 1958 Haynes and his wife, then billing themselves as "The Nomads," turned up in Terre Haute, Ind., in a new Mercury Voyager station wagon. In a stunt that brought new meaning to the term togetherness, they said they would spend 18 months visiting all 48 states.

"You'd be surprised how interesting it's been," Haynes, then 51, told a reporter for the Lima (Ohio) News in 1961. He described himself as a former ad man and said the stunt began as a bet with Linkletter. He claimed to be making $200 a day through earnings from sponsors.

He said in 1962 that he was from Georgia, that his wife was in Florida, and that Art Linkletter would be making a film about him.

“Don gave serious thought to the purchase of a car, because it would be his home for more than a year,” a contemporary postcard – possibly distributed by Kaiser – read. “He finally chose a Kaiser DeLuxe because it offers unexcelled riding comfort, the roomiest interior, dependable and economical operation, and an engine that could assure uninterrupted service for 140,000 miles.