Women are learning to ride motorcycles in Saudia Arabia.... I did NOT see that coming! 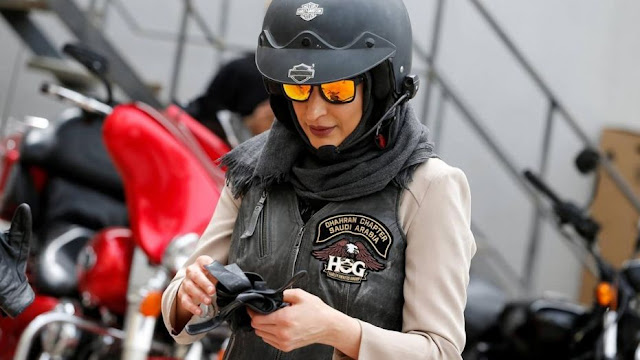 In a bit more than a month since women in Saudi Arabia won the historic right to drive, a group of them is headed out on the road on not four wheels, but two.

“We have been waiting a lifetime for this,” said Aliya, an enthusiastic 23-year-old student from Jeddah who is set on motorcycling. “Always watching my brothers ride. Now they’re teaching me.”

Saudi women are slowly amassing those needed motorcycle skills through weekly gatherings at the Bikers Skills Institute. Set inside a racetrack on the periphery of the capital city center, and under the instruction of an experienced rider originally from the Ukraine, an all-female riding class convenes on Wednesday nights.

The lifting of the female driving prohibition, announced in September last year and implemented on June 24, is part of a sweeping litany of reforms by the ambitious young Crown Prince Mohammed bin Salam, designed to bring the genders closer to equality - and squash the nation’s undercurrent of religious extremism.

Women remain bound by guardianship laws requiring male permission to obtain a license. And the standard dress code of a long flowing abaya is both impractical and inherently dangerous for motorcycle riding.