It was a real bad way for things to go, but in the end, the lemonade stand kid was given a $1100 riding lawn mower by Lowes! (your feel good news story of the day) 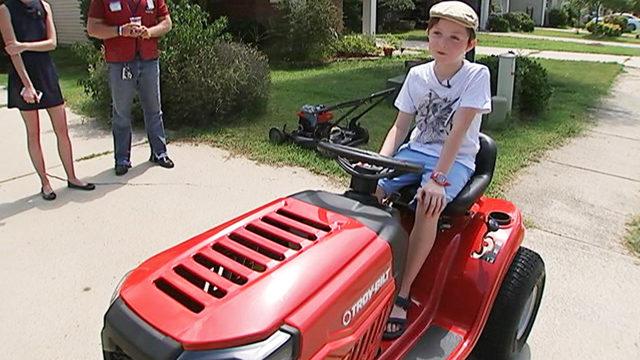 A 9 year old boy was earning, and saving his money, in order to buy a lawnmower. He only had $17 dollars when he was robbed at gunpoint.

A business card that one customer collected from the lemonade stand said Mark also works as a lawn mower, dog walker and professional ring bearer.

North Carolina authorities arrested a juvenile Wednesday they say robbed a the lemonade vendor of $17 at gunpoint, a stickup that prompted an outpouring of sympathy and donations for the young entrepreneur.

Detectives said they obtained security camera footage of a person matching the suspect’s description near where the robbery happened.

The suspect, identified as a male, was arrested without incident, charged as a juvenile with robbery with a dangerous weapon and possession of drug paraphernalia, authorities said.

Mooresville-based Lowe's heard about the story and donated a new Troy Built riding lawnmower to him. “It's pretty cool what you're trying to do at such a young age, and tell you what, it's pretty awesome to be a part of it," Lowe’s store manager Chris Beatty.