Hurry Up Please, It's Time. a 1946 memoir of the Director of Education for the UAW during WW2, which was Elizabeth Hawes, who left her New York fashion designer job to work in a New Jersey engine factory in 1943 for the war effort 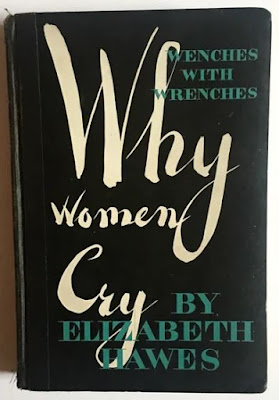 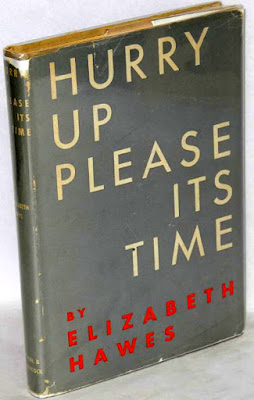 Most tellingly, over 100,000 women belonged to the United Auto Workers by 1945 -- and a survey of those women taken by the UAW Education Department indicated that 80 percent of them wanted to keep those jobs after the war.

Elizabeth Hawes was a writer and fashion designer who was once called the Dorothy Parker of fashion criticism.

Elizabeth was born on December 16, 1903 to John Hawes, a mild mannered assistant manager for Southern Pacific Steamship Lines, and Henrietta Houston, an accomplished Vassar graduate and progressive-minded suffragette. Growing up, Elizabeth traveled to New York City twice a year with her mother to window shop fashions, visit museums and eat at fine restaurants. Her grandmother bought her a Paris gown every year. Inspired by her Montessori schooling, Elizabeth began sewing clothes and hats for her dolls and for herself at the age of 10. When she was 12, she began sewing clothes for other children. Some of her creations were sold at a dress shop in Pennsylvania.

A Vassar graduate of the middle 1920s, Hawes took on Paris, and wrote witty critiques of the hype surrounding Paris fashion under the nom de plume “Parisite” for The New Yorker. She returned with any illusions about the fashion industry usefully destroyed.

She opened her own shop in New York at a catastrophically bad moment, just as the Depression loomed, but managed to keep afloat through hard work and commissioned designs for mass-market producers.

Hawes holds the honor of being the first American designer to hold a fashion show in Paris in 1932. The Parisian press did not cover it. Indeed, Parisian women were not going to buy fashions from an American designer. She wrote about this fiasco in her first book, Fashion is Spinach, published in 1938. It went on to be a best seller.

By the time she wrote Fashion is Spinach, she had already been the first foreign dress designer invited to Russia, and had married her 2nd husband, future avant-garde movie auteur Joseph Losey. She knew the political score as no other designer in America, and Spinach laid it all out, commercial fashion as just so much commodification.

In 1940 the FBI began an investigation into Hawes.

By 1944, Elizabeth’s marriage to Losey had disintegrated, and she moved to Detroit to take a position as a union organizer for the UAW. While in Detroit, she became a columnist for the Detroit Free Press. Her first column made a plea for a reduced, 30-hour workweek and daycare. Her column generated so many letters that the newspaper had to create a second column to publish the letters and Elizabeth’s responses.

She might have created a niche for herself as a gadfly, but her next book, Men Can Take It, proceeded with the dangerous argument that clothes could be radically different (men might even like bright colors or skirts more than hyper-masculinity!) and make a difference in society. For that suggestion, the (male) reviewers whacked her around.

By wartime, she set to work as a columnist for the New York daily PM, developing a set of practical tips for radical consumerism. Moving on, she went to work in a New Jersey Wright aircraft factory, plant number 7 specifically, where she gathered material for Why Women Cry, or, Wenches with Wrenches, a closely written manifesto of working women's needs.

Published in 1943, Wenches is ostensibly about how American women can best handle running the "American Home" -- with special attention paid to war workers, based on Hawes's own experience working in a war plant.

Wenches is disconcerting, in part, because the arguments it sets forth are the ones we are still having today. In short: how can women have rich, full lives? Hawes begins with a kind of taxonomy of the women she has met. She talks about the problems of Forgotten Women, aka housewives; "Anything which appears to be an effort to make their work lighter is merely an attempt to sell one more housekeeping device on the installment plan"

As a wartime book, a large part of Wenches is occupied with the question of women defense workers. How could women be encouraged to work for the war effort? Hawes had a commonsense solution to the problem of not enough women working for defense (essentially, "It's the lack of child care, stupid") but without plant experience, no one took her seriously. So she went and got a job at a plant making aircraft engines.

In training and working at the plant Hawes suffered the usual slate of familiar indignities: instructors who refused to teach women; instructors who claimed women would become sexually undesireable if they wore slacks, and women being the last to be hired out of the training class. At the plant, women weren't taught to maintain or repair their own machines, standing idle while workmen were called. Men were forbidden to swear in front of the new women workers and seemed terrified to give feedback on their work, lest they cry. And when the solution used in the grinding machines caused rashes in several women, nothing was done about it until a man got the rash, too.


After the war, Hurry Up Please It's Time (1946) was a plea for a socialist movement that made sense to Americans, especially to American women. Her commercial popularity had been laid waste. A Washington Post reviewer reflected that ''not since the days of the Amazons has any feminist been so violently anti-male.''

Hawes relaunched her fashion house in New York City in 1948, but the FBI contacted all her professional connections and informed them of her radical political activities and associations. As a result, she was shunned by industry professionals and her business venture failed and she moved to the Virgin Islands.

The FBI shadowed her from place to place, New York to Detroit to the Caribbean, where she enjoyed tramp steamers and sought to leave America's special ugliness behind. Anything But Love (1948), a savage commentary on the supposed bliss of Cold War American womanhood, was a shot fired from a distance, as was But Say It Politely (1951), which treated imperialism's effects. Demoralized but politically game, she held on. It's Still Spinach (1954), her last book, proposed that people use their fantasies to dress themselves. 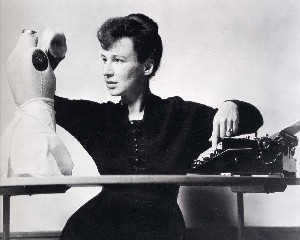