today, the news reported the amazingly terrible driving record of that school bus driver responsible for injuring 43, and death of two, due to driving across the median of a New Jersey highway 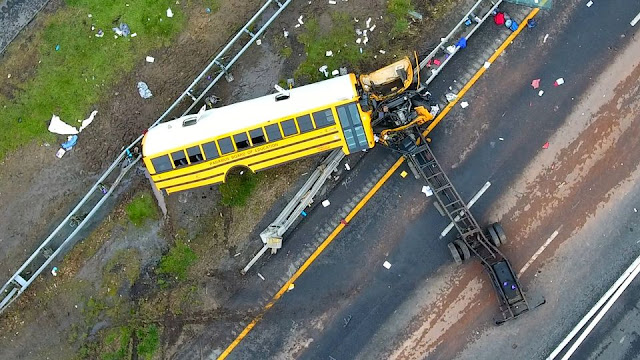 Six of the suspensions were tied to unpaid parking violations, seven were for administrative and paperwork reasons and one was for driving while his license was suspended.

In addition to the deaths of 10-year-old Miranda Vargas and 51-year-old teacher Jennifer Williamson, there were 43 others injured in the crash of the school bus carrying 38 fifth-grade students and seven accompanying adults.

Other news reports that there is a video of the event, http://www.nj.com/news/index.ssf/2018/05/nj_school_bus_accident_weve_seen_the_video_and_bus_drivers_actions_are_inexplicable.html

The long yellow school bus comes into the video frame on the right, slowly making its way down the ramp to I-80 west from Route 206. The driver passes the end of a concrete strip separating the ramp from the interstate. To the left, a dump truck travels down the center lane of the three-lane interstate.

the driver makes a seemingly inexplicable sharp left onto the interstate, darting nearly perpendicularly across the highway.

The driver, a source says, is heading toward a cut-through to the eastbound lanes, the kind used by State Troopers and other emergency vehicles, but occasionally repurposed by motorists making illegal u-turns.

The dump truck swerves to try to avoid the collision, but it's simply not possible. The bus is too long and takes up too much of the highway for a fully loaded dump truck to completely avoid.


Why isn't the entire driving record of a school bus driver checked during the application process?

I get it that what he may have done in the 60s and 70s isn't very relevant to his current driving style... but 14 damn suspensions of his license? That's a clear sign to anyone with half a brain that the person isn't cut out to be a school bus driver responsible for the well being of 4 or 5 dozen kids in rush hour traffic.
a school bus carrying 38 fifth-grade students and seven accompanying adults
at Tuesday, May 22, 2018