when you are ridiculously rich, making ridiculous bets is commonplace. Leopold de Rothschild made a bet famous horse trainer could get a team of zebras to pull a horsecarrriage through London 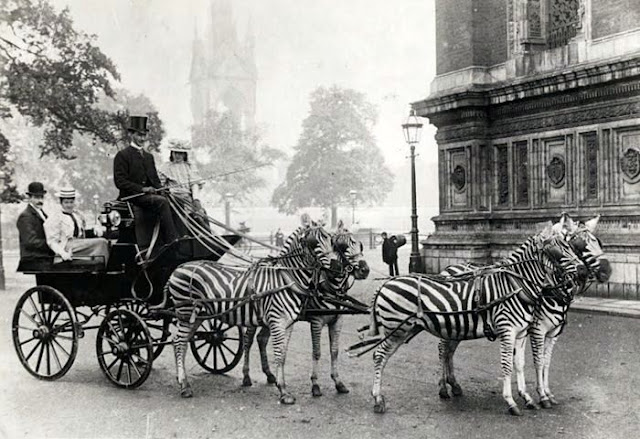 In the year 1898, in one of the many mews just off Cromwell Road, Kensington, lived Mr Hardy, who was a noted horserider & trainer, being one of the three men who had succeeded in riding the "French Rocking Horse". This was a device used by the French Cavalry. It had every possible movement of a wild horse not in the best of tempers.

Leopold de Rothschild, who knew of Hardy's ability, was talking to friends of this achievement and said that he was willing to make a stake on his ability to train any animal resembling a horse. One of his friends took up this boast, and a stake was made that Hardy could not train a team of zebras to pull a coach through London.

Mr. Hardy was hired to train a team of zebras to pull a coach through London, so Rothschild would win the bet.

After much trouble, the zebras were obtained, and Hardy agreed to help out. After two years of hard work, in 1900, Hardy informed Rothschild that his task was completed and that the team were ready for the road.

At six o’clock one morning, a strange sight was seen in London when, for the first time, a team of zebras were seen pulling a coach through London!