During Comic Con, which is far more Hollywood and entertainment than you might know unless you get to Hall H every day, I learned that Amazon has picked up The Electric State, by Simon Stalenhag, to make a mini series from 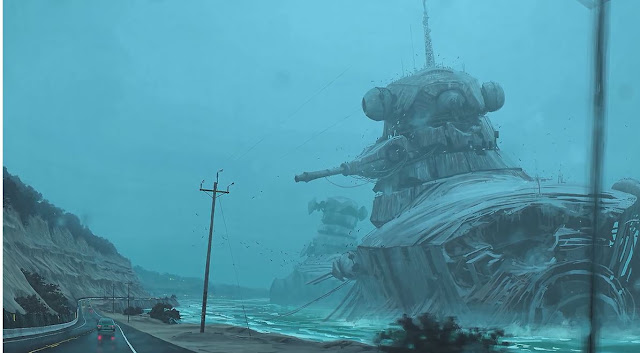 you can get an idea from the images, and the description of the book,

His alternative-universe graphic novel “The Electric State” follows a young woman and a robot traveling west to California. But in Stålenhag’s dystopian world set in 1997, the region is called Pacifica, and the country has been ravaged by drone war.

Known for narrative art that mixes realistic landscapes with 20th century nostalgia and science fiction elements, Stålenhag has amassed a cult following and critical acclaim for his inventive and captivating work. He even crowdfunded his book projects through Kickstarter campaigns, which brought his digitally-distributed artwork into the analog world.

Yet interest around Stålenhag’s works has been growing; the Russo brothers — the sibling director duo who recently made “Avengers: Infinity War” — landed the film rights for the book in late 2017. In addition to “The Electric State” deal, Amazon has ordered a first season of “Tales From the Loop,” another graphic project based on Stålenhag's earlier sci-fi art.

or, you can take the next video, and turn up the speed to X2

and it's examples like this, and that of Armand Baltazar, that cause me to try and motivate artists to make out a spec book, heavy on the art, simple on the story, and pitch it to both book companies and tv networks, as they are both desperate for new material to score a win with... after all, Hell Boy and The Walking Dead were comic books, Iron Man, The Avengers, the Nolan Batman movies with Christian Bale were graphic novels, as was Alita, Watchmen, Sin City, Tank Girl, Blade, X Men and Wolverine.