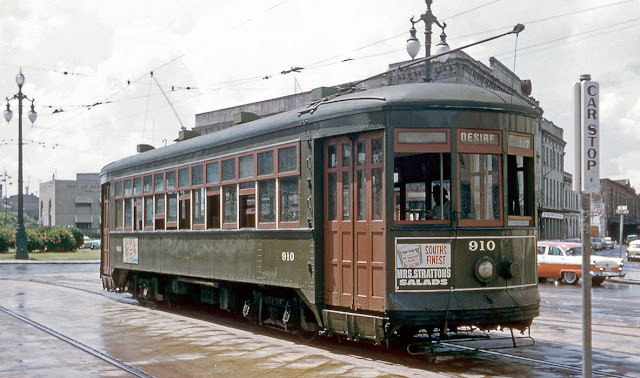 “New Orleans, June 15, 1957 – on the same day that I took the Canal Street photo pictured here, my goal was to find a streetcar that still retained the destination for the Desire line, made famous by playwright Tennessee Williams.

“In 1957 the Desire line had used buses for almost 10 years, but I approached the operators on their break at the foot of the Canal Ferry loop and asked them if they could roll the destination sign to ‘Desire’ to allow me a photo shoot. The first three or four cars only contained signs for the two remaining streetcar lines, Canal and St. Charles. Then on about the fifth try, bingo, Car 910’s signs still had the full complement of abandoned streetcar lines, so the kindly motorman set it for Desire and continued on his rest break until I had completed my photographic endeavor.”

35mm Kodachrome image and quoted text by William D. Volkmer from his post in the members gallery at shorpy.com