meanwhile, in the June 2018 news: two guys sprayed acid on nearly 100 cars at a Fontana car dealership in an odd but effective case of vandalism. 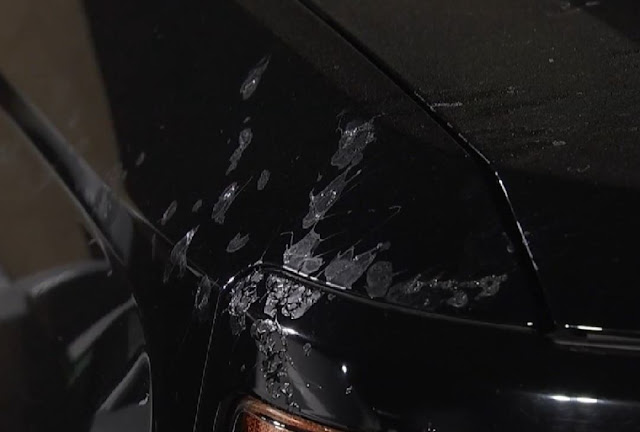 Surveillance footage caught the act in progress around 3am, as two people can be seen dressed up like they're spraying pesticides on plants. However, the acid-like substance was being methodically sprayed on vehicles at a car dealership, burning through plastic headlight covers and paint at Pacific Auto Center

In all, the vandalism only took a short time but caused "severe damage" to 91 vehicles according to Julio Ortiz, the dealership's general manager. Ortiz said the individuals targeted high price items to inflict the most damage possible.

Ortiz says 91 trucks and cars are so severely damaged that some will have to be sold at auction. “It just seems somebody really went out of their way to hurt our business, hurt our customers as well,” Ortiz said.

the dealership general manager when asked if he thought this was the work of a former employee with a grudge said he didn't think so. So, not only is he screwed, he's a moron as well.
at Wednesday, August 01, 2018