Bonner road rail wagons, something I've never heard of before. A railcar to trucking trailer that evolved into the current shipping container that goes from rail cars to tracking trailers, I suppose 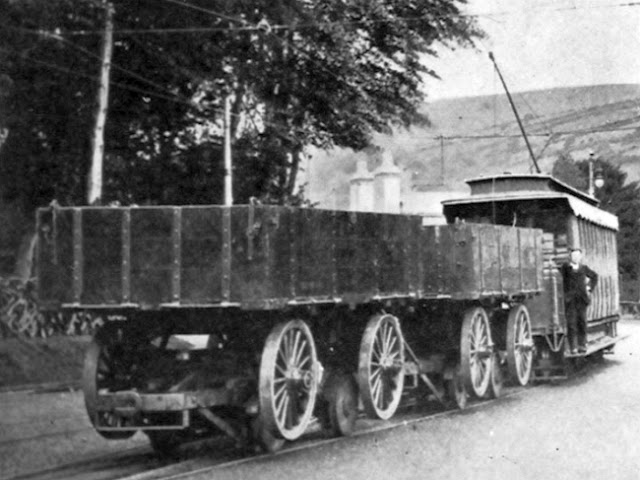 Four Bonner Road/Rail Wagons were ordered in 1899 by Alexander Bruce for operations for parts of the towns “without the assistance of rail lines” (In the event, only three were delivered). They were a cutting edge design, with the rail wheels lower than the road ones, and the transfer being completed by shunting the wagon into a siding with ramps either side of the track, raising the wagon to release its rail wheels, allowing the wagon to be hauled away on the road!

Originally, the "trolley freight ordinance" of 1913 had limited freight trains to certain hours of the night. This restriction seems to have been lifted at some point by the 1920's, as photographs and records of daytime freight trains do exist. The three car limit was also eased for nighttime movements, with some trains pulling as many as five trailers through the streets. The much anticipated subways were never built, and it's possible the city relented on some restrictions, perhaps resigned to freight in the streets as a fact of life.

To more efficiently handle all this freight, and help counter the ever increasing competition from trucks, the Electric Railways Freight Company (ERF) was organized on November 1, 1928. Closely modeled on the Electric Package Agency, ERF handled customer solicitation, billing, collections, interline agreements, and door-to-door pickup and delivery for its parent railways, the LSE, NOT&L, Penn-Ohio, Toledo & Indiana, and Ohio Public Service (formerly the Toledo, Port Clinton & Lakeside.) Service and schedules were carefully tailored to the needs of shippers in hopes of securing every last possible dollar of income.

An especially notable attempt by ERF to improve efficiency was the Bonner Railwagon. Invented by Col. Joseph Bonner of Toledo in 1898, the system was an early forerunner of the "piggyback" service adopted by railroads decades later. The wagons or trailers (originally horse-drawn, later pulled by motor trucks) could be used on streets conventionally, then loaded on a railway car for long distance travel. The trailers had wide-spaced wheels and no cross axles, and were parked astride the railway tracks on small ramps. A specially designed rail car was then run underneath them. Pneumatic jacks lifted the trailer wheels off the ramps slightly and clamped them securely in place. The transfer from road to rail could be accomplished in as little as four minutes. The system promised great efficiency and cost savings as high as 50% by eliminating the re-handling of freight between trucks and rail cars. Nor would cars have to sit idle waiting to be loaded or unloaded. 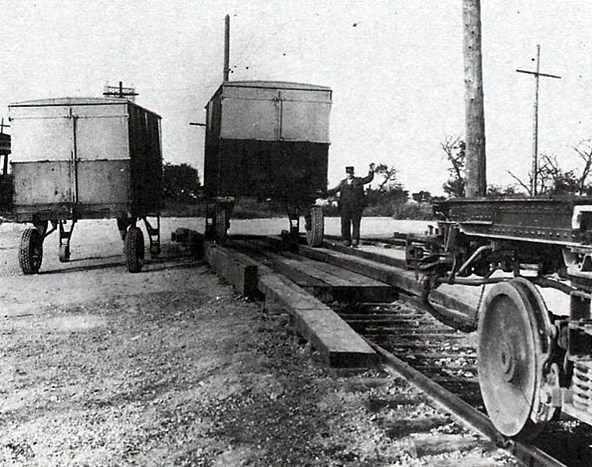 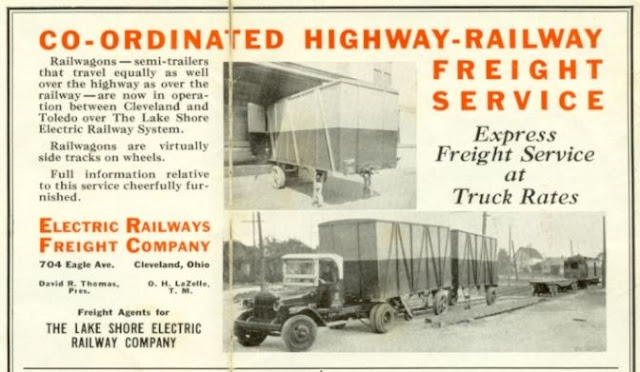 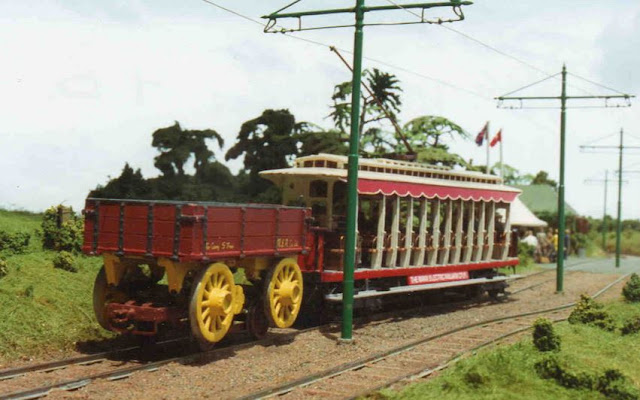