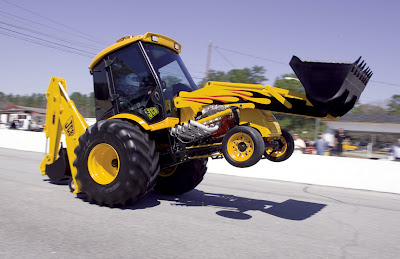 The JCB GT—a drag racing backhoe loader fitted with a 1000hp engine capable of doing speeds in excess of 100mph—will be will be speeding down the track, June 13-15, at the 2008 Holley National Hot Rod Reunion at Beech Bend Park in Bowling Green, Ky.

The idea for the machine came from JCB Chairman, Sir Anthony Bamford, the son of the company’s founder, Joseph Cyril Bamford. Irish comedian Frank Carson spurred the idea in 1985 by regularly delivering a joke about a JCB backhoe loader that whizzed by at 100mph.
Carson appeared to the press to launch the JCB GT—but not with a bottle of champagne, with a bottle of Guinness.

JCB is the fourth largest heavy equipment manufacturer in the world, and holder of the Bonneville record for fastest diesel streamliner the the JCB DIESELMAX. http://www.jcbdieselmax.com/html/home.php
( Andrew Henderson, marketing manager, JCB Inc.) "The enthusiasm shown by the organizers, teams and of course the public toward JCB meant we couldn't pass up an opportunity to come back for more.

"We always put on a great show for the public, whether it's the Dancing Diggers or the 100 mph JCB GT Backhoe Loader, you can guarantee that both children and parents will leave with a smile on their faces," added Henderson.

"We're excited to have the opportunity to further showcase IHRA drag racing to JCB and their customers," said IHRA President Aaron Polburn. "Their professional presence left an impression on everyone during the Rocky Mountain Nationals. Between the supercharged wheel-standing backhoe, their high-traffic display trailer on the midway and the long line of construction equipment lining the entrance to Castrol Raceway, fans left that race seeing JCB yellow."