The first school bus donated to the Henry Ford museum 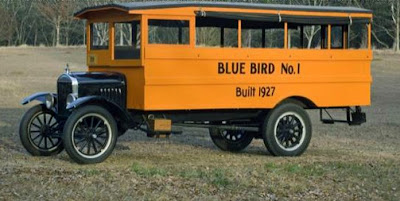 http://www.gizmag.com/first-steel-bodied-school-bus-donated-to-henry-ford-museum/8963/picture/42838/ "Using a steel body instead of wood and incorporating a Ford Model T chassis, the 1927 Blue Bird No. 1 proved a pioneering vehicle, with all major school bus manufacturers move to steel-bodies within a decade of its appearance."

Most school buses turned the now familiar yellow in 1939. In April of that year, Dr. Frank W. Cyr, a professor at Teachers College in New York who became known as the "Father of the Yellow School Bus," organized a conference that established national school bus construction standards, including the standard color of yellow for the school bus.

Engineers from Blue Bird Body Co., Chevrolet, International Harvester, Dodge, and Ford Motor Company, as well as paint experts from DuPont and Pittsburgh Paint showed up. Together with the transportation administrators, they met for 7 days and agreed on 44 standards, including the color and some mechanical specifications such as body length, ceiling height, and aisle width.
It became known officially as "National School Bus Chrome". The color was selected because black lettering on that hue was easiest to see in the semi-darkness of early morning and late afternoon. The distinctive color later became officially known as "National Glossy School Bus Yellow". http://en.wikipedia.org/wiki/Blue_Bird_Corporation
at Monday, May 26, 2008