I like semis, the military, and secret testing of airplanes... so, this is pretty cool! Thanks Steve! 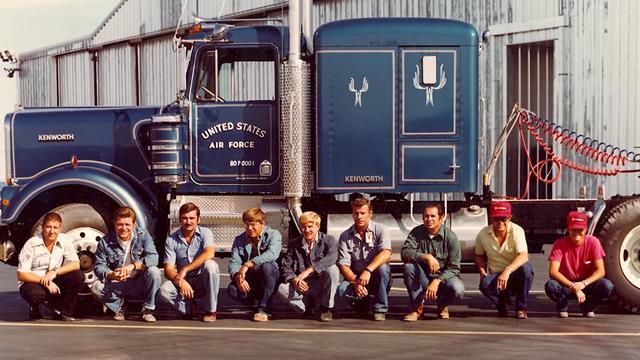 the Red Eagles were in possession of two Russian Mig jet fighters after Vietnam, and first they reverse engineered them, getting the maintenance crews familiar with how to operated and repair them, then they taught a couple pilots how to fly them, then the jets were exercised to figure out their capabilities - because they were better designed than the American fighter jets of the era, then then were used to instruct American pilots on how to engage in dogfights with jets, and how to do it effectively enough to win - or at least avoid being killed. Meanwhile, the R and D teams at Lockheed and Northrup Grumman were trying to make better / more effective jets to not just catch up to Russian fighter jet capabilities, but to create better jets than the Russians.

Right about that time the USSR fell apart, and since dogfights between jets hadn't happened since Vietnam - in a war, I suppose the whole effort, just like spy planes, became obsolete.

After all, it's not like the countries are going to war as they did in WW2, with skies full of planes, fields full of tanks, and forests full of infantry. Not since the lessons the Cubans learned on how to fight the formal military were used by the Vitenamese, then the Afghan vs Russian, then the Somali vs American, then the Iraqi vs American and Afghan vs American.

Vietnam showed that over the course of 10 years that the military industrial complex kept politicians on their payroll with no military education from letting the military win a war. Patton, Eisenhower, and Schwarzkopf knew how to win wars. LBJ, Nixon, Bush and Obama knew how to make money for their campaign donors by never winning a war. Carter couldn't get hostages out of the hands of people without indoor plumbing. Reagan took office and the hostages were released.

Some people got it, others don't. Just my two cents, from what little education public schools and the evening news provides. It's not like I've spent time studying at West Point, so don't get your panties in a twist if you believe I'm a moron. Just move along happy to know how amazingly informed about everything you are, because it's not like I'm going to waste time reading comments about any of this, nor am I going to argue it, research it, or be schooled on the past 75 years of military history. This ain't that kind of blog - the kind that feels it's an authority on all things with precise accuracy. This ain't Janes.

I ain't got time for all that. There's some fun stuff to post out there somewhere, and I'll be out there looking for it
at Wednesday, June 26, 2019