a perspective on the cold war between Russia and the USA, OR, the after affect of WW2's failed empire building caused hysteria in the USA that Russia was going to try and conquer Europe 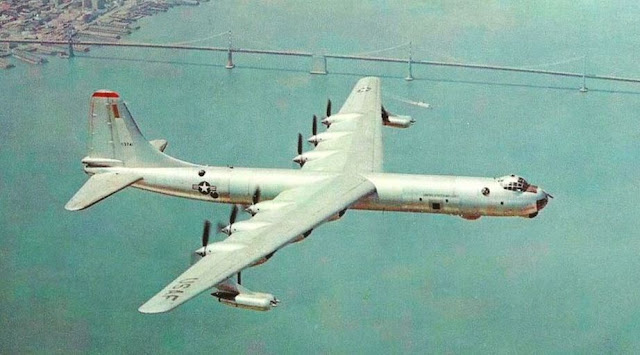 Soviet forces had no heavy long range bombers, and possessed no aircraft carriers or a blue-water navy. However, the Soviets had 100 divisions in Europe, and astoundingly could draw on another 200 divisions in a relatively short time-frame.

In Germany the United States had precisely one division on standby, a numerical disadvantage that didn't bear thinking about. Early post-war estimates said that the Soviets could have taken the rest of continental Europe in 20-30 days had they wanted to, with opposing forces being little more than a speed bump to the Red Army.

The US Navy wanted to build a new carrier fleet so that it could have long range nuclear armed bombers, and be able to stage the new jet aircraft off of carrier decks.

In post WW2 it was decided that America could afford new atomic bomber B-36s, or these new carriers, but not both. The US Navy began attacking the B-36 in print, eventually spending $500,000 on ads attacking a rival service's program.

This campaign got crazy when Louis Johnson, former head of Convair, became Secretary of Defense. One of his first acts was to order more B-36s - and he found the money by cancelling the Navy's new carrier program, including the United States, the first new carrier who's keel had just been laid.

The collective freakout by the US Navy admirals over this is now remembered in American history as the Revolt of the Admirals.

This event was notable for several reasons, including that it stated an open debate on how nuclear weapons should be used - the Navy (in an irony that would ring down through time) described SAC's plan for targeting Soviet civilians as 'un-American.

'The B-36, for its part, was shall we say "obsolesce-shamed," with the US Navy asserting the B-36 was already obsolete in its intended role, and was a "billion dollar blunder." There was also much speculation if the new aircraft could actually survive in a jet-powered combat environment.

Breaking itself into a Tactical Air Command (TAC) and Strategic Air Command (SAC), SAC was the first and most important delivery method of atomic bombs. The B-36 fit into the new scheme of things perfectly: for the near future, the only two other atomic bombers were the B-29 Superfortress and its variant, the B-50.

Both of these aircraft would have to be staged relatively close to its targets in order to attack, while the B-36 had a huge combat range. Initially, the USAF pictured the 100 B-36s it had ordered as atomic bombing specialists, kept in reserve in case more forward bases were wiped out in a enemy first strike.

The plan was simple: if the Soviets moved against western Europe, SAC's first move would be to burn every Soviet city it could with nuclear fire. It was also clear that even with close basing to the Soviet Union, the Superfortress twins simply didn't have the range to accomplish this mission - any attack would sacrifice the bomber crews when their airplane ran out of fuel. Another point for the B-36.