A beloved volleyball referee (77 year old Navy vet) had a car problem, and had to rent a car to get to games, until one awesome supporter, 10 teams, their families, and a used car dealership got together, and presented him with a fixed up used car! 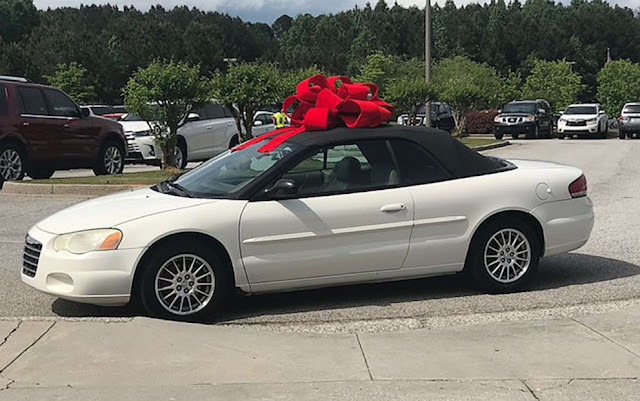 Lemuel Buster, a ref at Paulding County Parks and Recreation Department in Paulding County, Georgia, walked out of the gym last month and was met with a crowd of cheering community members. (just before his June 6th birthday)

Buster, a grandfather and veteran who played volleyball in the Navy, has been refereeing at the recreation department since it opened last year. But his car died before the first game of the year, so he’d been renting a car at his own expense to make the games since March. If they don’t have a ref, they can’t play, and he didn’t want to disappoint the kids.

One of the parents, Rebecca Jones, took notice of his financial situation and the fact that he was struggling with money for other expenses, including food, because of the amount he was spending on the rentals.

She made a plea to other people in the town, asking for help for the coach who had volunteered so much of his time so that the community’s kids could succeed in sports.

Lemuel Buster constantly shows how much he loves serving the community in Paulding County, Georgia and even arrives early at games to help the coaches.

Ashworth told "GMA" that Buster had informed her that his car died. Since it couldn't be repaired, he rented a car to get back and forth to games.

Ashworth and the Paulding County community members began collecting donations. One of the fathers who owns a used car lot donated a Chyrysler Sebring convertible to be gifted to Buster. Minor fixes were made to the vehicle so Buster wouldn't have anything to worry about, and in May, after a game in Mount Taber Park, team members and their families surprised Buster with the car and $2,000 in gift card donations.

He said, he saw mothers and fathers, with their cameras clicking pictures, and girls who were former players, he was wondering why they were all gathered there.

He finally got it when he saw a beautiful convertible Chrysler Sebring with a red bow on it waiting for him in the parking lot.

The videos are different enough to make both worth watching

"He was just blown away," Ashworth said. "He cried, we all cried."

Buster, considers all the players, their parents and the Paulding County community, as his family.

“These are my great-grandchildren. The parents are my children,” Buster said. “We’re family.” 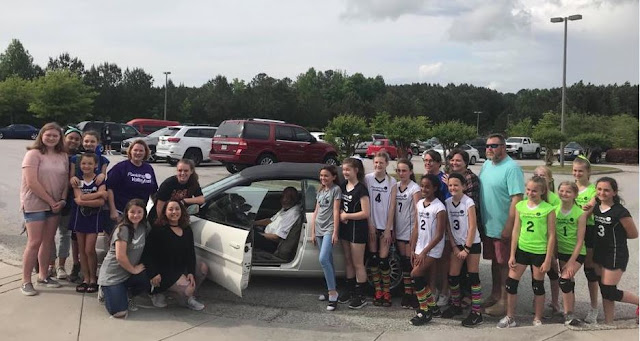 Buster told the waiting crowd that he was going to drive the car straight to church and got it blessed by a priest.

Buster says that there are good people everywhere and all we need to do is smile.

PS... in followup, last week the car saved his life as he drove himself to the hospital in pain, and found it was heart trouble, if he'd been minutes slower, he'd be dead.