a meeting with someone outside your zone can change you a lot if that other person is amazing. Skating's phenom Ryan Sheckler met a girl through Make-A-Wish 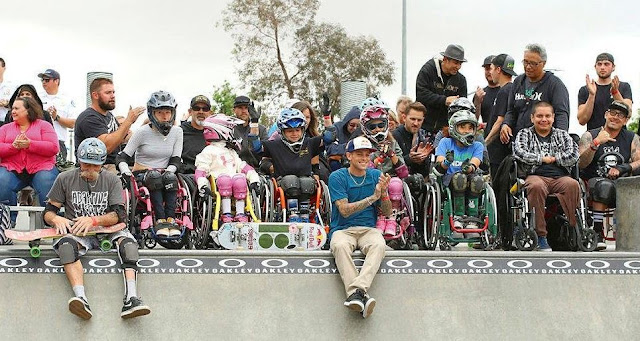 I've never heard of this guy, but, reading about him to write up this post turned up that he's a prodigy, and due to coming around at the right time with incredible talent, when the internet will make you a star, and MTV needing a young star for a lifestyle tv show of talent and parties... he went from being a skater kid winning events, to X games gold at age 13, having all the sponsors lining up to meet with him, and that MTV show.

So, he's all that, with the talent. And then a young leukemia patient named Casey asked, via the Make-A-Wish Foundation, to meet him.

“I was a kid (of 17),” Sheckler, now 28, recalls. “I couldn’t fathom why this girl wanted to hang out with me. I was nervous.” As soon as they met, though, “it was like we’d always been friends — it was super comfortable,” he says.

By the end of their time together the meeting had, for Sheckler, become about not what he was doing for her but how much she inspired him. He went home and told his family that he wanted to use his reach to help people like Casey. Soon after that, the family auctioned off his Range Rover, donating the proceeds to the Children’s Cancer Fund.

A year later, he formed a charity foundation to help kids with serious illnesses and action-sports athletes who’d suffered traumatic injuries. The hard work of raising cash to help an array of causes that fit under that umbrella has been spread among events that have become Sheckler Foundation touchstones. In a decade, the organization’s fundraising tally has topped $1.2 million.

There’s the annual Skate for a Cause, connecting directly to Sheckler’s brand and passion. And there’s a golf tournament now in its 11th year and still growing — Sheckler plans to tap his music-industry connections to add a concert next year.