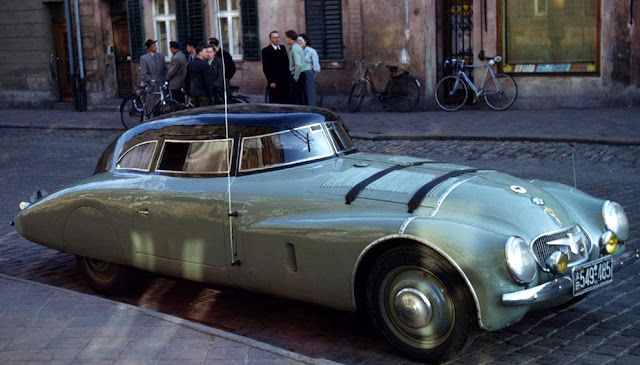 Jaray had been trained in airship design at a time when Germany was pioneering lighter-than-air flight. Having determined that the so-called spindle shape of an airship was ideally aerodynamic, Jaray cut it in half through the equator to form an automobile body. Further study determined that, in order to give the car stability, the half-spindle shape had to be tapered out into flat wings on either side of a tapered rear. The windshield was completely curved at almost 180 degrees to ideally direct air around the car rather than over it.

After 1955 the Adler was exported to the United States and came into the ownership of Joe Gertler Sr., operator of the Raceway Garage in the Bronx and a noted racing car fabricator and mechanic of his time. Remarkably, of the three Rennlimousines that survived the war, Mr. Gertler would come to own two of them.

The Adler was later acquired by Jimmy Brucker, best known for the Movieworld – Cars of the Stars Museum in Buena Park, but widely remembered as a sponsor of numerous kustom kulture artists, including Von Dutch, Robert Williams, and Ed Roth, as well as a supplier of unusual antique automobiles to the film industry.