The Orlando Police Department was forced to remove a woman from a Frontier Airlines plane Tuesday night after she tried to bring a squirrel on board, claiming it was an emotional support animal 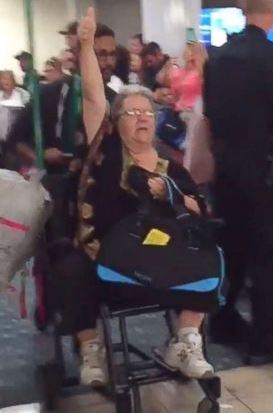 Yes, she is exactly what I imagined she'd be. Old, past crazy cat lady status, and apparently in dire need of some emotional support.

Not only was the woman removed, everyone on the flight had to deplane after she refused to exit.

"When she refused to deplane Orlando Police were called and requested that everyone be deplaned so they could deal with the passenger," Frontier said in its statement. "Police eventually escorted the passenger off the aircraft and took her to the main terminal."

Video shot by passengers on the plane showed the woman being taken off the plane in a wheelchair as she was jeered for refusing to comply with the airline's orders. She flashed a middle finger and then thumbs up as people clapped for her removal.

Several other airlines updated their policies this year as well, including JetBlue and Delta, which banned pit bulls in a controversial move.

Frontier Airlines is actually changing its policy for support animals beginning Nov. 1. The airline will only accept cats or dogs, each passenger is only allowed one animal and advanced notice must be provided 48 hours before departure.