Brazil's truckers had a 4 day strike to protest rising diesel prices that caused fuel shortages, cut into food deliveries, backed up exports and threatened airline flights. The govt got the message 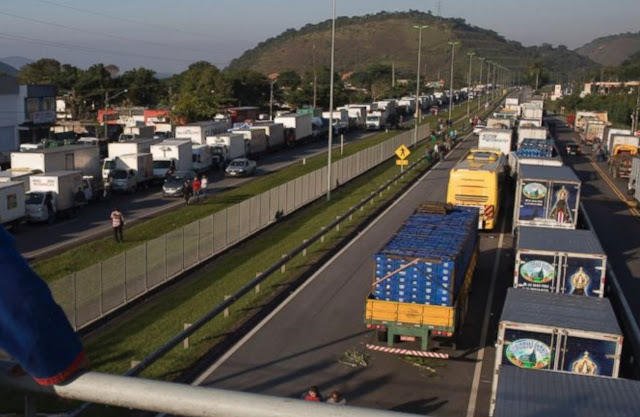 Brazil's economy runs largely on road transport and the strike to protest rising diesel prices was beginning to have serious consequences, with highway police reporting blocked roads in nearly all of Brazil's states.

Eliseu Padilha, chief of staff for President Michel Temer, told reporters in Brasilia that several unions that represent truckers agreed to suspend the strike for 15 days to give all parties time to negotiate a solution to rising fuel prices that drivers say has cut deeply into their earnings.

The airport in the capital of Brasilia allowed landings only by planes that carried enough fuel to take off again.

In Rio de Janeiro, only about two-thirds of the city's buses were running Thursday

The Brazilian Association of Meat Industry Exporters said dozens of meatpacking plants were idling because of the strike, and 1,200 containers carrying beef for export were not being loaded on ships each day. Brazil is one of the largest exporters of meat in the world.

Jorge Martins, owner of an orange distributer, said he hadn't had a shipment in days.

Truckers complain that rising diesel prices have cut deeply into their income and are demanding relief from the government. Diesel prices are being pushed up by rising world oil prices and Brazil's falling real currency.

On Wednesday night, the lower house of Congress rushed through a bill to eliminate a tax on diesel through the end of the year. But the Senate still had to approve it.

Truckers rejected the Wednesday decision by the state oil company Petrobras to reduce diesel prices at refineries by 10 percent. The company said the measure would last for 15 days and give the government time to negotiate an end to the strike.

"The government thinks truckers are illiterate and can't count," said Vicente Reis, who has been driving for 20 years. "In 2018, there has already been about a 25 percent increase in fuel prices. And now they want a 15-day freeze with (a reduction of) 10 percent. Truckers know how to count, Mr. President."