Since April 1st, with only 14 videos, this guy has made a you tube channel with 1.5 million subscribers. Yes, you too can make an impact on the world, if you're well spoken, choose the right topic, are intelligent, helpful, generous, and present your videos so a vast majority can benefit from them 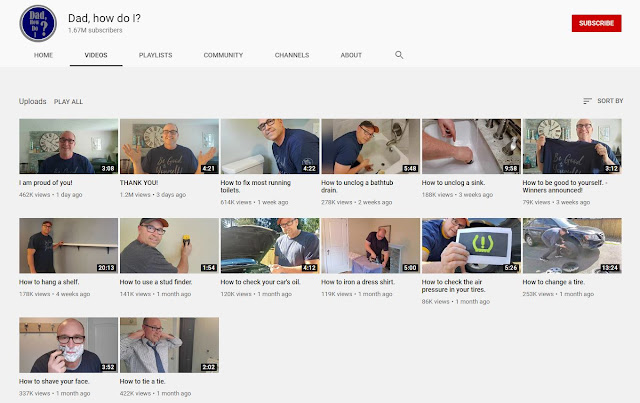 Rob Kenney, a father of two adult children, has become a heartwarming YouTube sensation by cobbling together a dozen videos that have a touching purpose: As someone whose father walked out on his family when Kenney was a kid, he wants to use his channel — aptly titled “Dad, How Do I?” — to teach young people how to deal with basic household tasks that he had to learn on his own.

Rob’s mother, a Kansas native and one of 12 kids with a close, extended family, planned on raising her own, large family close to her homeland. But when she married Rob’s father, he forced their departure for New Orleans and then Washington. Coping with the stress of raising eight children thousands of miles from anyone she knew, Rob’s mother turned to alcohol.

While Rob’s father worked in a neighboring city, the marriage deteriorated. The custody battle raged on after the divorce, and “He got custody of us, but he didn’t really want us,” Rob said. “I think he was kind of done by that time.”

The kids lived on their own for weeks at a time. Their father loaded them up with groceries then left town for a week of work. Then Rob’s dad told his older siblings he didn’t want them anymore.

Years later, the kids reconciled with their dad, but their mom died in 1986 at age 59 without reconciling with her kids.

He and his father did reconcile after his old man asked for forgiveness, at which point Rob decided his goal in life was 'to raise good adults'.

Rob and his wife of 29 years raised two children who now live as successful, well-adjusted adults. His son, Kyle, works as a software engineer. His daughter, Kristine, earned a handful of degrees helping her work with kids.

Now, I'd fail him for this video, for a couple reasons, but then, he's just not a car guy. Read the manufactures required tire pressure on the side wall of the damn tire. Seriously, the tire pressure mentioned on the door jamb sticker is only for the tires that the car manufacturer sold the car with, they might not be on the car anymore.

But, regardless of that and other things, in just the first 3 minutes, he's on point, and trying to be helpful in teaching people stuff that deadbeat dads were not around to teach kids.

So, average the awesome factor of that, with the fail on just this tire pressure video, and he's still A+ with me.

His changing a tire video has problems, like recording it so far from the camera you can't hear him... at least, not on my laptop's speakers, maybe with plug in powered speakers... anyway, he doesn't know how to use a scissors jack, without busting his knuckles, and is showing other people how to bust their knuckles. So, whatever... people will figure out better ways to do things when they've got the tools in their hands and try this stuff out themselves. But dang, you know? He should have got a car guy to give him a hand, and pointers, before he tackled car stuff. I do like how he remembered to tell people to use a tire wedge to prevent the car from rolling once jacked in the air, but, he didn't show it, relative to a hill, in front or behind a tire. So, points off. Still, averaged with the awesome factor of trying to help? Averages to an A+