Paulette Goddard and her 1937 Salisbury Aero 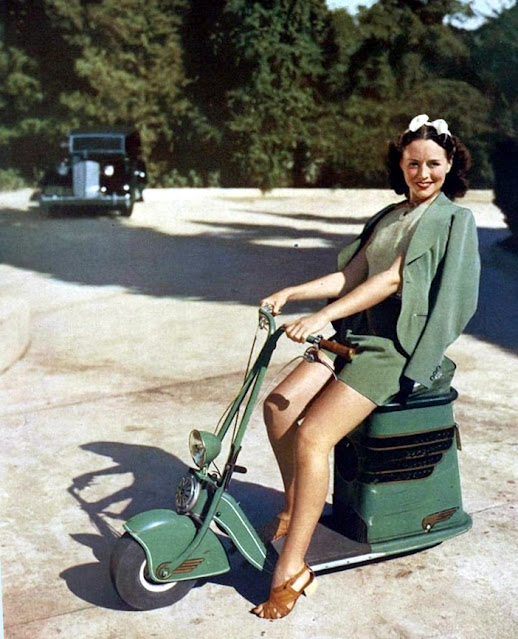 Paulette Goddard was a famous actress in the 1930s and 1940s. She was Charlie Chaplin's leading lady in some of his biggest hits (Modern Times and The Great Dictator). She starred in several movies with Bob Hope (the Cat and the Canary and the Ghost Breakers), and she was on the short list to play the lead in Gone with the Wind. For more info about Paulette, please see the Wikipedia account of her life.
Her married life was also Hollywood legend stuff - her husband's included Charlie Chaplin and Burgess Meredith
She reportedly used the Aero to zip around the production studios, saving herself much time and walking. According to one press account, she loved her Aero so much that she purchased 13 additional scooters so that she could host scooter parties.
Unfortunately, Paulette had a nasty spill on her Aero in March 1940 while zipping around a production studio lot, and tore a knee ligament. The production studio (Paramount) thereafter banned actors and actresses from riding scooters on the lot.