I just learned the Kaiser Waimea still exists! It was at the Amelia Island Concours this year, and Lane Motor Museum bought it 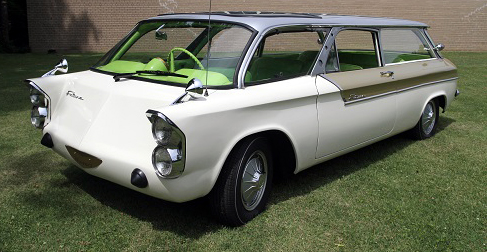 A year after starting the automobile company Kaiser-Frazer, Kaiser also formed Kaiser Aluminum and commissioned Rhys Miller and Frank Hershey (designer of the original 56-57 Ford Thunderbird two-seater) to produce a portfolio of all-aluminum car designs to feature in promotional literature.

The Miller and Hershey futuristic Kaiser prototypes never made it past the drawing board. But in the 90s, automotive restorer, Blake Larson of Minnesota pulled out his collected Kaiser Ads from the 60s and was taken by one singular design, the “Waimea”. Rhys Miller is solely credited to the Waimea design. Intrigued by its unusual middle driver’s seat position with center steering, Larson decided it was time to bring the design to life.
Larson repurposed parts that added to the high style of the Futura Waimea: '59 Cadillac rocket taillights mounted on the 'D' pillar, a sunroof from a '54 Ford Skyliner, the instrument cluster from a '49 Nash Ambassador, and the roof rack, from a Vega Wagon. Larson said he re-christened the Futura after the early '60s Ford Falcon Futura. It has bears the Futura’s wheel cover and script.
Larson showed his newly-finished Futura Waimea around Minnesota in the 90s but then it disappeared. In 2013, it turned up on eBay and was purchased by Wayne Carini. Lane Motor Museum acquired this car in 2021.
https://www.lanemotormuseum.org/collection/cars/item/futura-waimea-1961
https://www.eclassicautos.com/more-highlights-from-the-2021-amelia-island-concours/
at Wednesday, August 18, 2021