Did you know a replica of the Monopoly game's car was built for an ATT commercial a dozen years ago? When filming was done the car was given to the ad agency rep, who has recently donated to the Lane Museum

https://www.eclassicautos.com/more-highlights-from-the-2021-amelia-island-concours/
In 1937, the first cast-zinc race car token was added to the game. Unsurprisingly, the single-seat race car has seen several variations over time, yet the iconic form resembles that of a 1930’s Midget race car.
With a small, lightweight, open-wheeled body with long external headers, rounded hoods, and capped with vertical-slat grilles- the Monopoly car game piece captures the Midget racer characteristics in its tiny token form.
The oversized Monopoly car was made by Biscuit Filmworks, a London and Los Angeles based commercial production company, and featured in a 2009 AT&T commercial.
Built on a modified Club Car golf cart chassis with a 48-volt electric motor, the hand-molded fiberglass body contains all the important details from the game piece. With an up-close examination, you can get a sense of the quick turnaround in which these commercials are fabricated, nonetheless, the Monopoly car is a solidly built piece of popular culture.
The Monopoly car was generously donated to the museum by Darren Wright. Wright worked for the ad agency that wrote and developed the AT&T Commercial. When the shoot was “a wrap” the car was offered to Wright who jumped at the chance to own it! 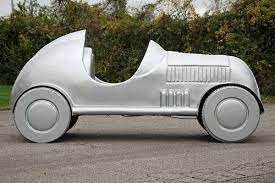 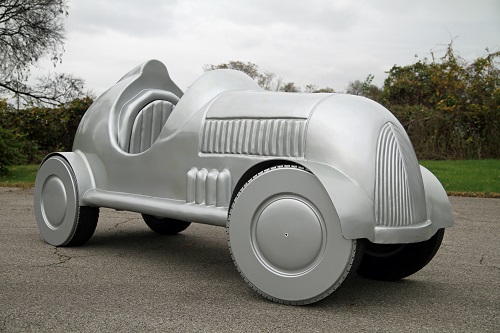