have you heard of the Jarrett Palmer Express train of 1876? A New York to San Francisco high speed train to set a record and get a theater troupe to the theater in time to perform, but mostly, to drum up publicity to sell tickets! 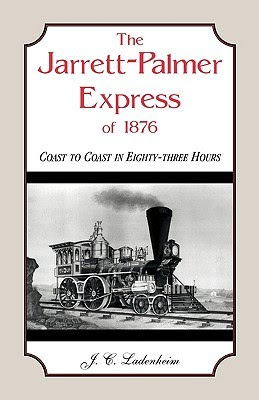 (note of interest of this books author:Jules Calvin Ladenheim, American neurosurgeon. Diplomate American Board Surgery, American Board Neurologic Surgery. Decorated Navy and Marine Corps medal. Member American Association Neurologic Surgeons, Congress of Neurosurgery, Nordiska Neurokirugiska Forening, Abraham Lincoln Society (president 1993-1994), United States Ship Columbus Veterans Association, Harvard Club New York. https://prabook.com/web/jules_calvin.ladenheim/788740 )
According to Nellie Bly, the Palmer-Jarrett trip across the continent had been prepared and planned for 6 months in advance, and when the start was made, a flagman was posted at every switch and crossing between New York and San Francisco.
Bly was quite proud that her trip from West to East, was 500 miles longer, and beat their time by 24 hours, though I don't think she took into account improvements in the train engines over the decade since the Palmer-Jarrett event. 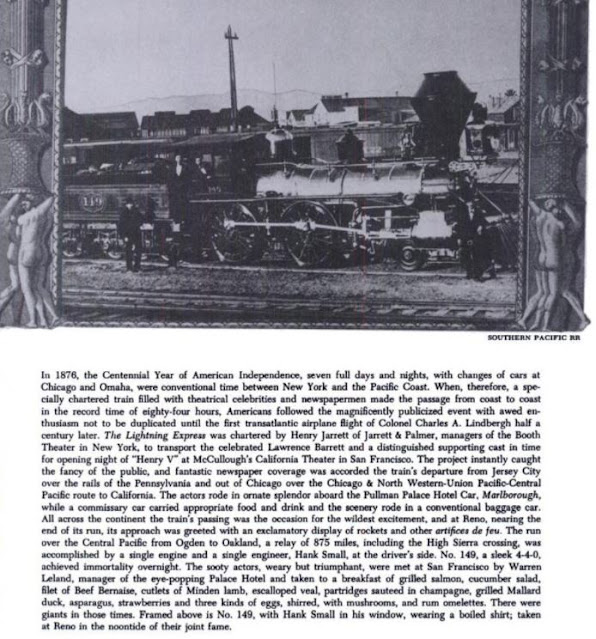 The transcontinental Lightning Express captured the attention of the nation while transporting a theatrical troop from New York to San Francisco in record-breaking time for opening night, in under 84 hours.

At every scheduled stop, supplies, water, and coal were ready for quick loading, as were staff, including conductors, brakemen, firemen and engineers. Likewise, the engine was switched out five times to avoid mechanical issues.

The national excitement generated by the arrival of the Lightning Express in Oakland was incredible and not to be again matched until Charles Lindbergh landed the Spirit of St. Louis in Paris fifty years later.

Lucious Beebe--the renowned author, gourmand, photographer, railroad historian, syndicated columnist, (owner of a Pullman Palace car if I recall correctly from a post I did a long time ago)  and all-round social raconteur--vividly described the journey in his railroad classic, The Age of Steam "In 1876, . . . seven full days and nights with changes of cars at Chicago and Omaha, were conventional time between New York and the Pacific Coast. 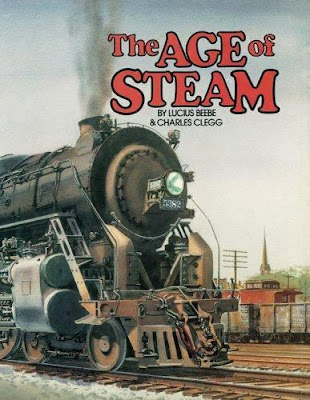 When, therefore, a specially chartered train filled with theatrical celebrities . . . made the passage from coast to coast in the record time of eighty-four hours, Americans followed the magnificently publicized event with awed enthusiasm. . . The Lightning Express was chartered by Henry Jarrett of Jarrett & Palmer, managers of the Booth Theater in New York, to transport the celebrated Lawrence Barrett and a distinguished supporting cast in time for the opening night of Henry V at McCullough's California Theater in San Francisco.

The project instantly caught the fancy of the public and fantastic newspaper coverage was accorded the train's departure . . . over the rails of the Pennsylvania [and then] the Chicago & North Western--Union Pacific-Central Pacific route to California. The actors rode in ornate splendor aboard the Pullman Palace Hotel Car, Marlborough, while a commissary car carried appropriate food and drink and the scenery rode in a conventional baggage car.

All across the continent, the train's passing was the occasion for the wildest excitement and at Reno, nearing the end of its run, its approach was greeted with an exclamatory display of rockets and other artifices de feu. The run over the Central Pacific from Ogden to Oakland, a relay of 875 miles, including the High Sierra crossing, was accomplished by a single engine and a single engineer, Hank Small, at the driver's side. No. 149, a sleek 4-4-0, achieved immortality overnight.

That engine, the Central Pacific’s #149 “Black Fox,” pulled the special train the last portion of the journey, 879 miles from Ogden to Oakland, in a record-breaking 24 hours.

The sooty actors, weary but triumphant, were met at San Francisco by Warren Leland, the manager of the eye-popping Palace Hotel and taken to a breakfast of grilled, salmon, cucumber salad, filet of Beef Bearnaise, cutlets of Minden lamb, escalloped veal, partridges sautéed in champagne, grilled Mallard duck, asparagus, strawberries and three kinds of eggs, shirred, with mushrooms, and rum omelets. . ." On the evening of June 4th, Jarret & Palmer's Henry V opened on schedule in San Francisco to a sold-out house.