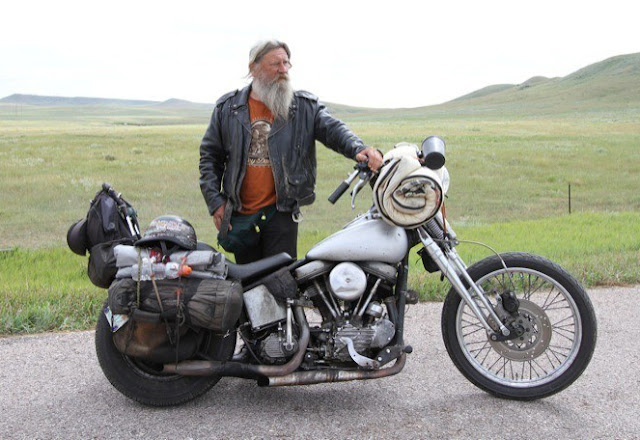 his Panhead was a basket case he says. “It was all apart. The tranny was in pieces, and the engine was all together. But it was a really nice basket case.”

He had to get tranny cases, some hardware, some nickel-and-dime stuff… and in two weeks he had it up and running. It was the first Harley he ever owned, and the first motorcycle he ever put together. 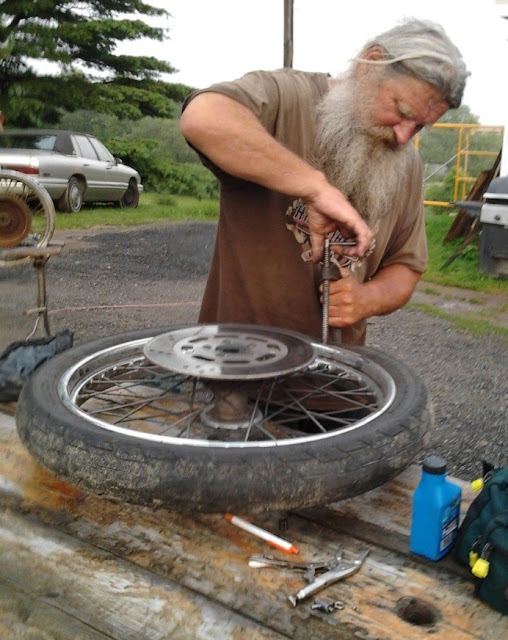 The tanks and rear wheel were the only changes he made for a long time. It went from a chain to a belt primary within a few years, and he eventually painted it silver.

After I assembled the bike, I took it for its first ride. There was no doubt in my mind I could ride this bike with a foot clutch and hand shift; I knew I could do it. I maneuvered around traffic, went back to the garage and I hit the wall.”

The Panhead became his main source of transportation in ’84. When it got too cold, he headed south. “Probably been to Sturgis from the East Coast 27 or 28 times, a few times from the West Coast. I just started adventuring.”

Billy uses at least 800 gallons of fuel a year, and in spite of his not keeping track of mileage, he reckons he puts between 25,000 and 30,000 miles a year on the bike. He’s visited 800 Harley-Davidson dealerships and all the state capitals, except for Alaska and Hawaii, as well as almost all the Great Lakes—all but Lake Superior.

“I carry some tools, primary belts, spark plugs, set of points, set of brushes for my generator, patch kit for tires, electric air pump, tire irons, tent, tarp—I use the tarp more than my tent. I would rather sleep on the tarp on the ground or I make a lean-to if it’s humid. I’ve been carrying most of this stuff for a long time.

Billy says, “I’ve been on the road 28 years straight except for when I got involved in a hit-and-run accident in ’93 in Piedmont, South Dakota. I spent six months in the VA hospital in Hot Springs, had several operations and spent a year and a half on crutches.” He’s been on the road ever since.
Billy takes great pleasure “inspiring people who might want to get out and enjoy their lives.” He says, “I’ve been blessed. I get to go to some really fine parties, and I get to meet some really fine people. And it’s really gratifying that people remember me. I’m nothing special. The young kids with the bobbers; they remind me of myself when I was young. They just think of riding, not of breakdowns. Now I think of preventative maintenance. If the bike breaks down, if it fails me, it’s because I’ve failed it.”
Skip the first 5 minutes
https://thunderpress.net/top-stories/panhead-billy-burrows-running-free/2014/04/28.htm
https://www.facebook.com/groups/124265164279525/
at Sunday, July 25, 2021