An early version of the Tilling-Stevens Petrol-Electric bus in service with the Moortown & Shadwell Bus Co. 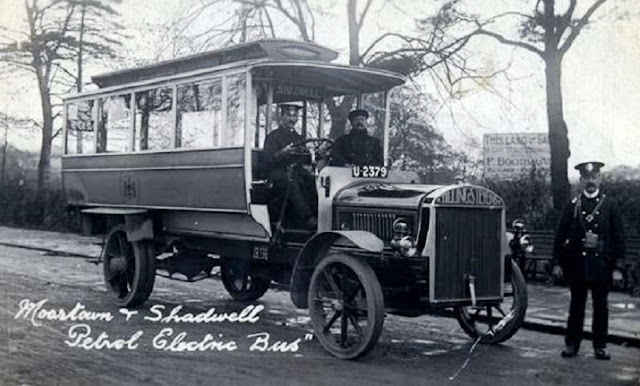 Following the introduction of the Tilling-Stevens' Petrol-Electric Engine in 1913, Tilling-Stevens buses fitted with the petrol-electric engine were soon in operation throughout Britain. 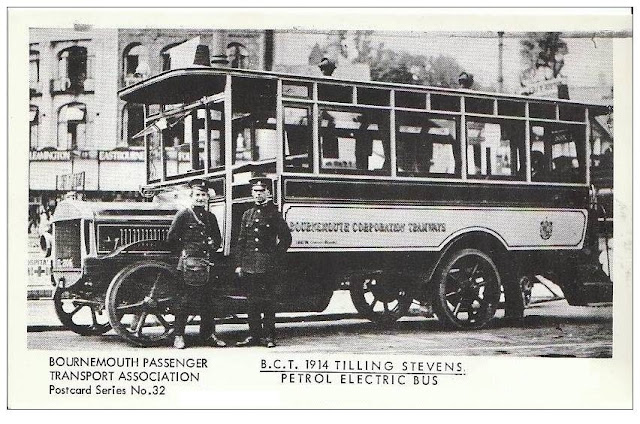 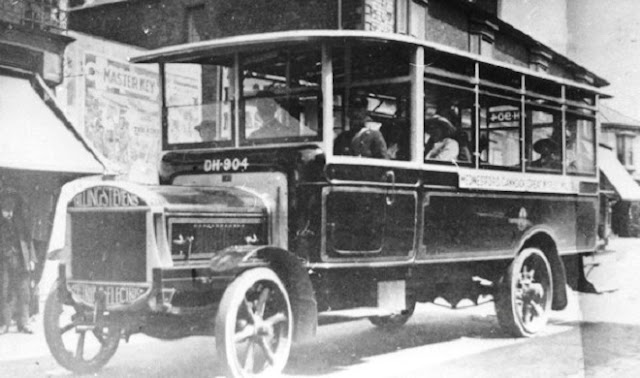 During the latter part of 1906, Mr. Stevens evolved the first details of the Petrol Electric system. The first Petrol Electric was his ‘Old Grey Car’ equipped with a special dynamo, a series electric motor coupled to the back axle, a four armed controller and switch. The dynamo which was driven direct by a 20 H.P. four cylinder engine had a double wound armature with two commutators. A fan was fixed on the end of the dynamo shaft remote from the engine and propelled a strong current of air through both dynamo and motor. The electric motor with a cardan brake on the rear end was coupled to the road wheels by a cardan shaft and differential gearing. The controller was of the dial pattern with the contact bars arranged in two concentric circles mounted on an insulating base. Four insulated metallic brushes carried on the ends of a four armed switch carrier electrically connected the inner and outer contact circles. It was arranged for neutral, two speeds forward and reverse. This controller was operated by a lever corresponding to the orthodox change speed lever. The Petrol-Electric Grey Car was run as a Petrol-Electric for five or six years, and during this period covered a considerable mileage and made many successful demonstrations. The car was arranged so that an Electric Searchlight could be mounted in front of the rear seat and worked from current generated by the dynamo.

The first mention in the technical press of Mr Stevens’s petrol-electric system is in Motor Traction of 23rd February 1907. This contains a detailed description of “the Stevens system, patented by Mr. W. A. Stevens, managing director of Messrs. W. A. Stevens Limited, dynamo and electric motor manufacturers, of Victoria Works, Maidstone.” It includes an illustration of the chassis of a motor car fitted with the equipment and notes that “the system can be fitted to existing omnibuses, no special construction of the frame being necessary. It is therefore available for the conversion of omnibuses with defective gears to silent-running vehicles of the latest type. The main features of the Stevens petrol-electric car, including the controller and interlocking gear, method of ventilating dynamo and motor, also the electric engine governor, are the subjects of patents or applications for patents.”