I trust that if I see a lion in a car, there's a good story. I haven't ever been disappointed 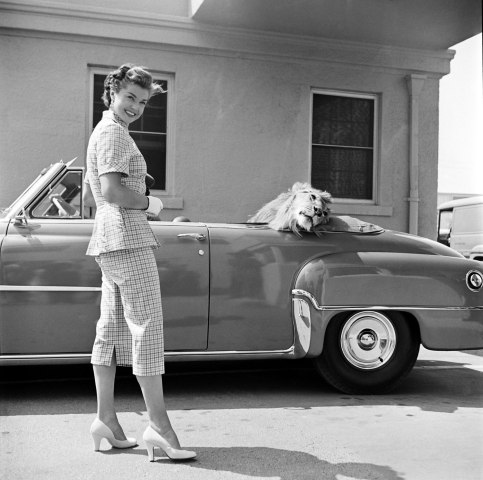 Had Esther Williams — a national-champion swimmer — been better at math, she would’ve gone to USC on an athletic scholarship. But a ‘D’ in high-school algebra compelled her to retake the course at a community college. While working part-time at a local department store, the athletic beauty caught the eye of a talent agent; she started her showbiz career in a dance-and-swim show called Aquacade, and ultimately went on to work for one of the biggest studios of 1940s Hollywood.

Under contract at MGM, Williams developed from a contract player (who was Mickey Rooney’s love interest in 1942’s Andy Hardy’s Double Life) to the star of grand and gaudy extravaganzas called “aqua-musicals.” It was in this role — as a graceful water nymph who could also adequately fill a bathing suit — that Williams became a box-office star. (It was work that required much more than splashing about in a pool: Williams ruptured her eardrum seven times, and after executing a 50-foot dive in 1952’s Million Dollar Mermaid, ended up in a cast for six months.)

Why is this a post about Esther? Because oddly, she has been a focus of several posts already without my ever coming across this photo