The Des Moines Register reports that John Deere can't meet demands, because it can't get anyone to apply and increase man-hours of production, even though it's union wages mean starting pay is 19 an hour... in Ohio. That's gotta be pretty good at making a dent in a house payment 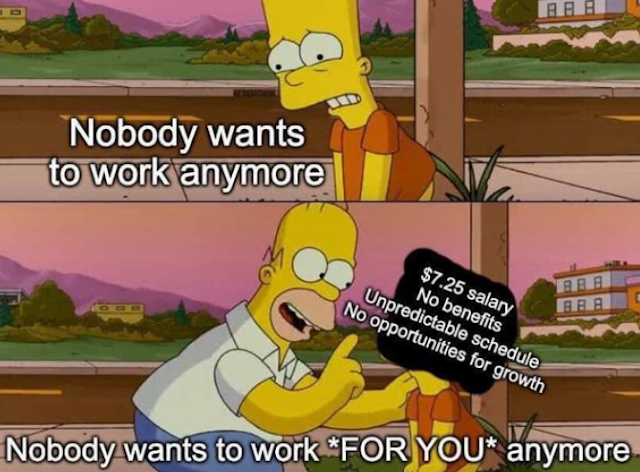 Deere & Co., one of the biggest agricultural equipment manufacturers, reported an $8.1 billion backlog in agricultural and turf equipment orders in November, a 32% increase over the same period the year before. For the quarter ending in January, the company reported year-over-year sales were up more than 20% in agricultural and construction equipment. Yet it says it can't find enough workers to meet the current demand.

They want to hire another 120 right now. And, come November, they project demand will necessitate 200 more hires — if they can find enough able bodies.

Experts were particularly surprised to hear that Deere couldn't find enough employees. A household name, with union representation from the United Auto Workers and a starting hourly wage of $19, Deere has been one of the Midwest's premier manufacturing employers.

When Deere held a job fair in Waterloo March 6, it drew about 400 applicants. A month later, the company held another.

"We haven't seen as much interest as we have in the past," said Mark Onderick, the company's labor relations manager at the Dubuque plant

So, what is it that John Deere representatives, managers, etc are NOT saying that is obvious to everyone else that looks at the issue?

Deere has lay offs, periodic buyouts to reduce workforce, and benefits don't kick in until after a seven-month probation period

Well, that's a lot of bullshit that I've never run into in the 15 jobs I've had in the past 20 years

Indeed, Deere, for instance, gave notice to the state in 2016 that it was laying off 115 workers.

The company issued a similar notice last summer, alerting the state it was laying off 35 employees. It also periodically uses buyouts to reduce workforce.

It turns out, many of the company's benefits don't kick in until after a seven-month probation period.