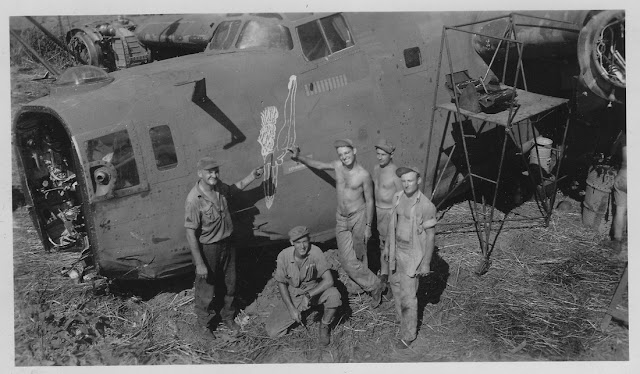 The name of the ship was " One Time ", and yes, it was a long battle..  even recommended for the Distinguished Flying Cross. Credited with 4 confirmed, 3 probables. However, the navigator counted 15 fighters, some of the gunners counted 12.. very difficult to count them during a fight like that.

There were 5 left when we were done. Our nose gunner, Ken Strait, was pretty badly hit, I think he had a bullet in almost every joint on the left side of his body.. While the fight was very rough and mean, the tension did not decrease after the fighters left. It took us several hours to climb to 800 Ft. from 200.. Keep in mind that on a lone recon the B-24 had little or no protection from the bottom. So, we headed for the deck, and then they couldn't get under us to wipe us out.

When we hit the coast of Australia, we couldn't find Darwin.. I was on the radio almost constantly talking to the base, but it was dusk and we couldn't see any lights.. First I asked them to turn on the runway lights, and when they said they were on, I asked them to have searchlights turned on and aimed straight up so the light would bounce off the clouds.. As we were preparing to bail out, one of the crew let out a yell over the intercom and said "I see the lights ".. I then asked the Ground Station to have Ambulance and Crash Crew standing by.

When we were on final, the pilot said I am lowering the gear.. since we had been having fires aboard from leaking hydraulic fluid, we were worried about that, but the gear came down and then we hit the runway and suddenly the pilot yelled " The brakes are gone ".. and everybody braced themselves.

When we reached the end of the runway, Currie tried to maneuver the ship down a road that took us away from the fuel dump and we hit trees until the right gear went and swung us around to a violent stop.

We on the flight deck went out the top hatch; several men threw Strait up through the hatch to 2 more standing on top, and then the bombardier hurried him off the wing leading edge to the ground. When I got on top I saw they were moving slow, so I jumped off the high side and started to run.

We were all afraid that the ship would blow up.. but she didn't .. I talked to an Aussie who had helped drain the tanks, and he said we had 8 gallons in one tank and less than 5 in the others.. The only injury due to the crash, the photographer, cut his finger.. Lucky.. you bet!!