Thie motorcycle was built as a result of economic solutions rather than engineering designs, with VW car engines, and Ford brakes 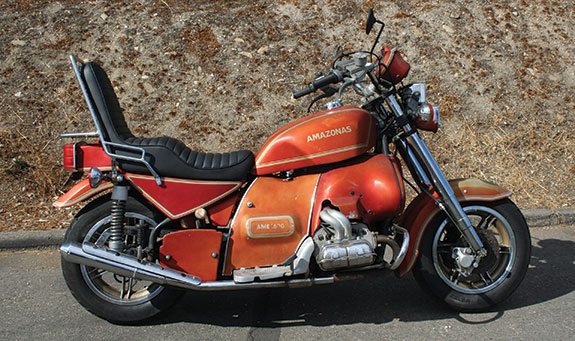 in 1977 Daniel F Rodrigues took notice, and advantage, of the police force and Army Harleys falling apart in Brazil, and promised a locally built replacement that would take advantage of the VW factory which could supply engines.

Rodrigues produced a claimed 450 of these motorcycles. Sold to the public in different configuration’s (sport, touring and such) to meet customer demands. They were also used as Highway Patrol, police and military bikes. This bike is a 1983 “Super Sport”.

The local San Paulo govt was so impressed they gave him a contact before he'd actually built one.

Because of the colossal debt incurred over the previous quarter-century, anything not made in Brazil, such as big motorcycles, were either not imported or were heavily taxed, often tripling the price

Rodrigues set up shop in his garage, and built bikes with the 1300 for cheap bikes, and, the 1600 for those who wanted 50 hp. He put an 8 gallon fuel tank on it for 300 miles of use before needing to find a gas station

But, instead of using the flat four as a stressed member of the chassis, the engineer chose to build a clumsy cradle frame and shoehorn the engine inside. There was a little trouble with the VW 4-speed transmission, which did not seem to take kindly to being altered to utilize a foot-shift, using a Brazilian-made drum. Reverse gear was included, shifted via a hand lever down behind the rider’s right heel.

Just as the chassis was an error caused by shadetree mechanics, so was the suspension, and it would have been fine for a small truck... but it wasn't right for a motorcycle of less than a 1000 pounds 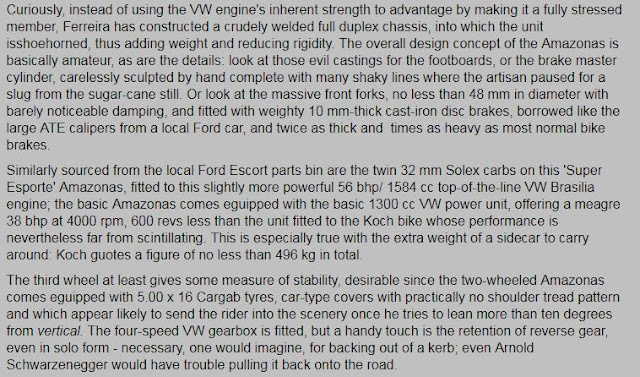 of course, a Porsche engine would work too.