book review; Original Chevrolet Camaro 1967-1969 The Restoration Guide, Jason Scott. It's just a reprint of the 2001 book. So, shop wisely and get the least expensive of the many reprints 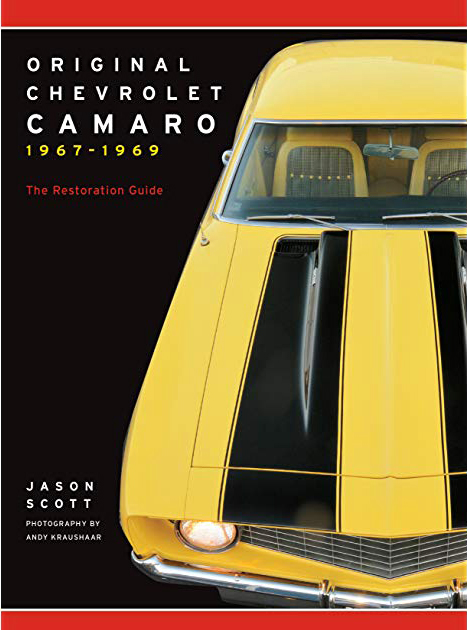 The author started out at the local gas station and repair, Jonesy's Service Center.  Then got a Journalism degree, and was instantly the Technical Editor of "Muscle Car Review" magazine.

In the decades that followed, moved through every other car magzine you're familiar with including "Muscle Car Review", "Chevy Action!", "Corvette and Chevy Trader", "Ford and Mustang Trader", "Mustang Milestones", "Motorcycle Milestones", "Pontiac Enthusiast", and "Mopar Enthusiast", in addition to writing and photographing the material for numerous automotive books, and contributing articles to a host of magazines, including "AutoWeek", "Chevy High Performance", "Mopar Muscle", "Corvette Fever", "Mustang Monthly", "Super Ford", "Racing Milestones", "High Performance Pontiacs", "Poncho Perfection", and others.

First impression, great layout by setting the book to have the 1967 Camaro, then moving on to the 1968, then the 1969. NOT asking the reader to look through a mix of the 3, on each page, and showing the differences between them.

However, I also would not agree that this is a restoration guide, as the subtitle claims. If you've restored even one car, you'll know it take a lot more images of focus on every specific part and place on the car to do a restoration, like, the correct finish on every bolt, bracket, washers and nut: whether that should be body paint, black oxide phosphate, cadmium or zinc plating, bare metal, etc etc etc.
And without factory marking/inspection marks information, this, nor any, book is NOT a restoration guide

But it IS a good primer on what original Camaros were made to look like, what hoods, what stripes, what rims, steering wheels and interior parts and upholstery, though it would be vastly improved with comparative identification photos 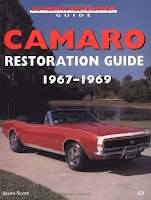 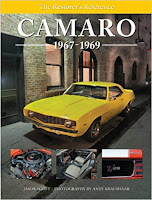 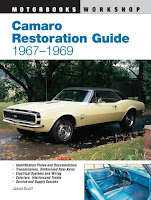 When I say this or similar book, it's because this book is either a reprint of the 1997, or the 2001 book of the same title or similar to them... same name, same author, (three examples above) and though it's certainly been given new photos, it may be the same text.... because they screwed up and didn't edit or proofread it properly, which I've pointed out to Quarto/Motor Books in the past. Either let myself or another enthusiast look at these book BEFORE they go to print, or get called on it when we review the books. So page 96 upper left 2 paragraphs. Obviously cut and paste and something wasn't moved right, and something is missing. My guess is that the taillight assembly paragraph doesn't belong on page 96 at all as they covered that on page 94... but the interrupted spoiler paragraph from page 95 doesn't continue on page 96, though some other sentence is indeed carrying on from somewhere.

Is that my only complaint, no, that's just the gripe I almost always have with the lack of expert proofreading that gets my goat with most auto enthusiast books. Just because I only have a high school diploma, doesn't mean I can't spot all the mistakes that someone in the book making process didn't catch, or made due to publishing methods.

The other complaints I have are possibly from expectations, and can the book maker or author be held to account for those? You decide. I'd like a comparative photo montage when the author discusses the the variety in grills, tail lights, stripes, and hoods. It's easy to make, and as a reader, I believe it's mandatory to include in a book for the understanding of the reader. Example? The 2 grill shapes of the 69 Camaro. The 3 stripes. The 4 different taillights. 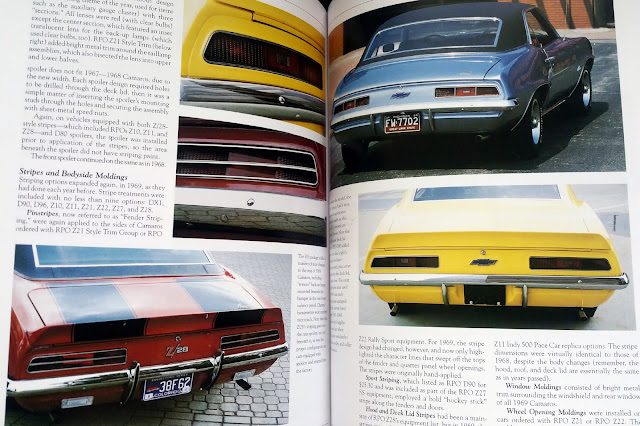 Just a visual identification guide, which readers ought to expect based on the writer's statement in the introduction "to show all the subtle differences that make a typical restored Camaro easy to identify as restored versus original" and I think they forgot they were doing that. They never got around to showing what a 1000 point restoration would look like

Case in point, Mike can look at a 69 Camaro in a couple moments and tell you if it's restored correctly, there are a few simple and fast things to look at, and the 1st is the stripes and if they wrap under the header panel (that panel between hood and grill) 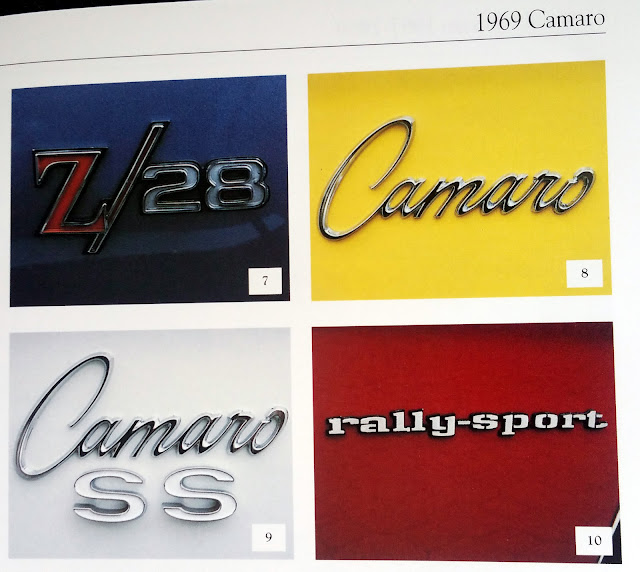 So, onto things learned:

I like to learn, and then use the info, what to look for in determining what year a car is. And at this, this book is exactly why you'd buy this book. This book seems to me to be the right book to read and learn from to then go out and be able to accurately identify the year and model of a Camaro, and decide if the car is a fake SS, or Z/28, built to look that way from a plain 6 cylinder model.

After all, how the heck do you tell if you're looking at a 67, or 68? 'Cause we all can tell a 69. Well, that is covered quite well, as you'd expect, and that is what I think this book was made for. A 67 has wind wing windows, or Vent Windows. The 68 had only the side window that was cranked up and down.

I learned that the bumble bee stripe around the nose of the Camaro, was actually named the "Front Accent Band" and that you COULD get a Camaro with a front bench seat in 67 (RPO AL4) and I suspect a 67 bench would bolt into a 68 or 69. Wouldn't that be a remarkable car at a car show! The bench seat was extra cost.
I learned that cars have drain holes because when they were produced, prior to the paint, they were dipped in liquid chemicals to prep the metal for primer... and those holes were plugged later. Seriously, no one has ever mentioned the drain holes purpose before. I thought it might be for getting water out of flooded cars.
I learned the 1968 rear spoiler was called by Chevrolet, an "auxilliary panel" RPO D80.
I learned a lot about the speakers... as just having installed the 8 track and rear 6x9s in my Coronet I'm aware that the factory was stingy with speakers, and here's some interesting trivia for Camaro, or other car models, when talking about car options.
The AM or AM/FM (U63 and U69) was mono - not stereo, and got one speaker in the front dash. An optional rear deck speaker was extra cost option RPO U80.
The AM/FM stereo radio was RPO U79, and came with 2 kick panel speakers, but no back deck speakers, unless the U57 8 track was ordered, which was a 4 speaker system and utilized the kick panel speakers as well as a pair or rear deck speakers
I learned the full wheel covers (hub caps) option RPO N96 cost more than twice what the rally wheels did. RPO ZJ7 was 31.60 vs the wheel cover at 73.75. Crazy huh!?
The 1969 body panels got an improved look, but the hood, grill, doors, fenders, tailpanel, and valances are still interchangeable
And lastly there are Ford parts on all the 67 - 69 Camaros. The glass windows were manufactured by Libby Owens Ford 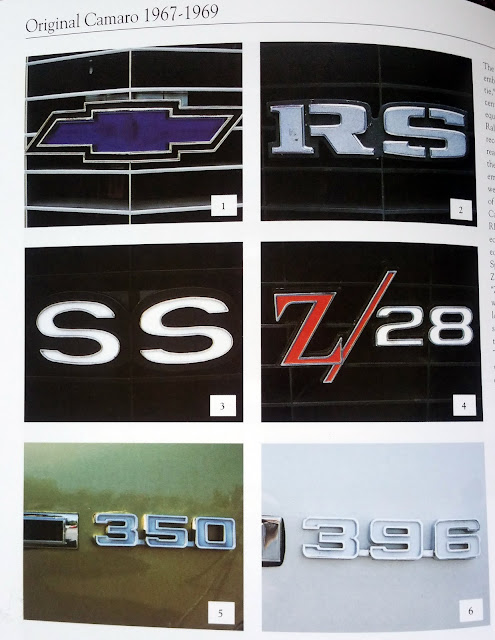 In summation, the sub title of the book, "restoration guide" is not accurate, this book wouldn't get your through a restoration, nor inform you of how well someone else's restoration was  - if you were buying a 67,68, or 69 Camaro that the seller was trying to get more money for based on how much it was restored.

However, I think this is exactly the right book for an intro to the 60s Camaros, and a reader will learn the variations and become well versed in the Camaros enough to not embarrass themselves at a car show. To learn more would be to become an expert, and that would take several thick tomes of researched material to get more educated on the right coatings on hardware, and what the right parts vs cheap knockoffs should look like (example, which repop company makes the hub caps right, with out making the mistake of too deep a lip or ring etc, things looked for in NOS vs Repop points restoration counts when getting that certification at Carlisle, or Bowling Green)

This book has a good 3 chapter layout, and each is nearly identical, so it's easy to find the taillight info for the 1st, 2nd and 3rd year Camaro and compare them

But, I wish this book had a page of the tail lights for 1969 and by comparison, showed how to identify the model of car by the taillight, SS, RS/SS, RS, Z/28, and base model (and the stripes, and grills)

Mike happened to have a copy, so, I compared them, and they are identical, on every page 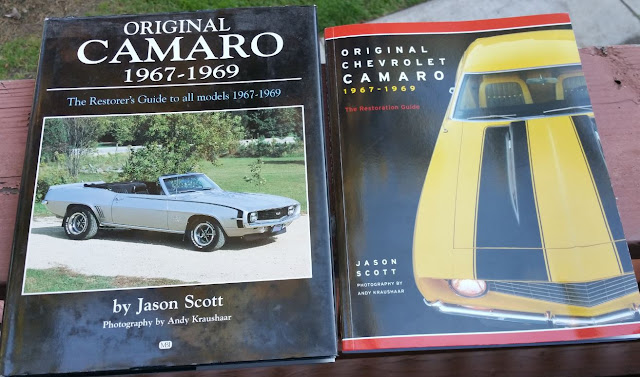 and page 96 upper left corner, the 1st paragraph are both not in a smaller number size, or different font, to indicate it's not the book text, it's actually the photo caption
at Sunday, July 07, 2019