on the last known set of Goodyear Thunderbolt tires, which were found in a warehouse in Akron, Ohio, several years ago

7 3/4 inch wide white wall passenger tires. These were the skinniest tires ever mounted on a Shelby.
They were overinflated and filled with nitrogen instead of regular compressed atmosphere. This was done to prevent the tires from getting overheated on the long run.

Carroll Shelby figured he would be the first to find out if the tires would work, so he personally took the car out for a few laps on the track, He thought it was the best GT500 ever made, and loved every minute of it. Goodyear was able to film their Thunderbolt promotion after all the testing was done, which was a success story for all involved. The public loved the tires, and people started buying them for their own family cars. Ford noticed an uptick in new orders for Shelby Mustangs, which meant Shelby would be busy building new cars. Ford, Shelby, and Goodyear saw the profits from this effort quickly.

The Shelby Mustang Super Snake averaged 142 MPH for 500 miles, reaching 172 MPH in the straights. Even more amazing was the fact that these skinny little tires performed flawlessly, and retained 97 percent of their tread after the 500 mile run! The fact that he went 172 MPH on 7 1/2 inch wide Bias Ply tires was phenomenal. This was a fact that Goodyear promoted heavily, of course. 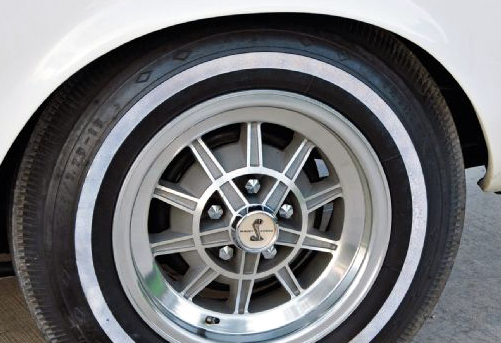 For an accurate restoration, it would need original Thunderbolt tires, but, as they hadn’t been made in over 30 years this was a problem. This SSS was purchased by collector Richard Ellis in 2008, and he was committed to an exhaustive nationwide search to find these tires took place. Finally, while looking through an old repair shop warehouse he found 10 of these Thunderbolt original tires, with the original stickers, in a tire rack in the back corner.